What kind of battery does WALL•E run on?

WALL•E has been working for several hundred years and one of the keys to this is his ability to use parts of broken robots to replace his own broken parts.

Now this won't work with the electrical batteries we know today - they all have limited shelf life and in 10+ years even the best battery wears out. I can't imagine a contemporary battery lasting for hundred years.

Is there any data on what battery WALL•E uses that has such outstanding lifetime?

Seeing that Wall-E was able to absorb a complete daily charge from a few hours of sitting in the sun, either his solar conversion rate is quite extraordinary or the batteries he uses are able to maintain and gather a charge quite quickly in comparison to modern batteries. 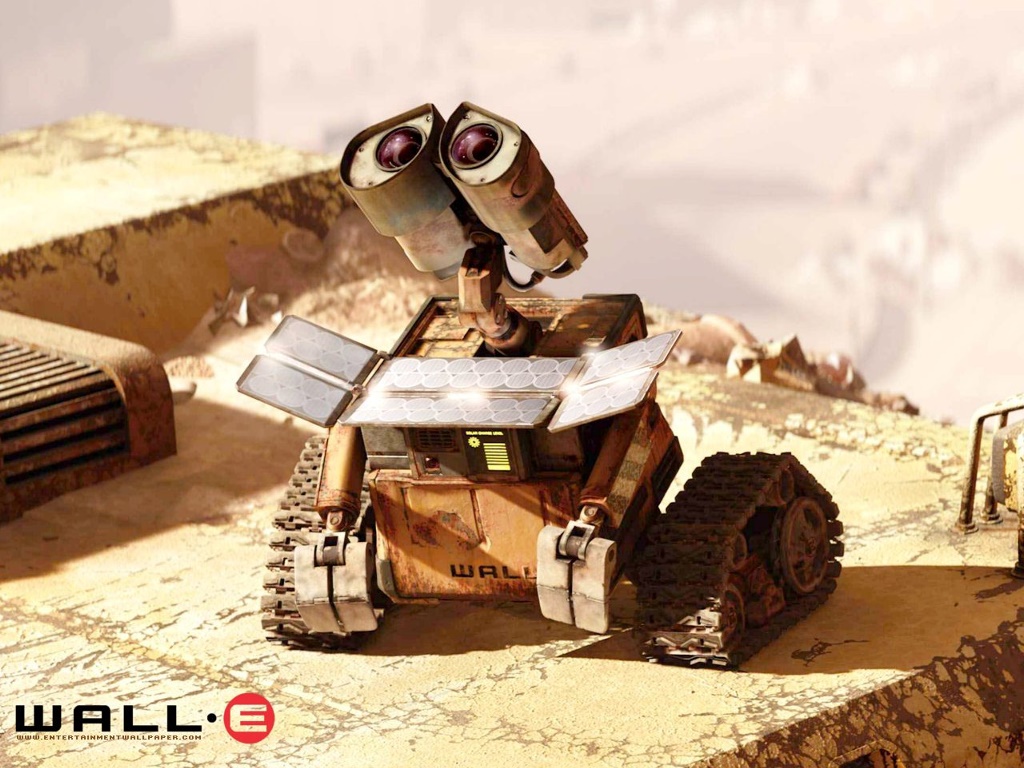 But even if the batteries were only as good as batteries today, Wall-E would have certainly had:

Considering the length of time he is active, my theory would be that he uses a fuel cell. As the Wikipedia article states:

Fuel cells are different from batteries in that they require a constant source of fuel and oxygen to run, but they can produce electricity continually for as long as these inputs are supplied.

The "recharging" would consist of using the solar energy separate water into hydrogen and oxygen. While not necessarily efficient, it would nevertheless provide Wall-E with an almost infinitely renewable supply of energy.

The technology in Wall*E is so bonkers I would happily say it's because of magic advances in battery technology. But that's not satisfying, and not even internally consistent, so let's polish this turd and make it work!

Wall*E is fantasy, an analogy for the unsustainability of modern society. Wall*E, as a hero in the story, is supposed to represent frugality. He recycles. He's solar powered. He's making tiny contributions to cleaning up the mess that turn into huge results. The analogy doesn't hold up when you realize he's just shoving the problem around, then again, he was designed by the people who made the problem in the first place.

You've spotted a major problem with the science of the film, it takes place 700 years after the Earth was abandoned, and the disposable technology Wall*E relies upon will naturally degrade. Plastic will break down in sunlight and become brittle (no spork). The tape in his precious VHS of "Hello, Dolly!" would have crumbled. And, yes, most batteries would be running at a small fraction of their original capability even if they've been just sitting around.

Wall*E's batteries are the least of the scientific problems with Wall*E. Consider The Axiom. Having survived for 700 years in space in leisure, the Axiom would appear to be the epitome of sustainability. Why didn't they use that sort of amazing recycling technology on Earth? (Remember, any tech they had on the Axiom they had on Earth.) The Axiom dumps their trash into space, how do they sustain that for 700 years? The Axiom is an analogy for humanity having knowing how to save the Earth, but finding it easier/cheaper to trash somewhere else, just like we do now. Great analogy, bad science.

The world of 2100 (when the Axiom was launched) appears to have made some huge advances in AI, space flight and (ironically) recycling. The Axiom has hyperdrive, robots smart enough to keep everything running for 700 years with minimum human intervention, and has sustained a large human population. With all those robots running around, it's fair to say they've got good batteries. The energy density of batteries has been getting better at a rapid pace for decades now. What about their lifespan?

The primary way current batteries die is by the charging cycle. After four years and 1000 cycles, my laptop battery is down to 60% it's design capacity. With special equipment this can be reversed, but only so much, and certain types of batteries respond better than others (do not believe what you read on the Internet about battery reconditioning at home).

But batteries also degrade on the shelf. The shelf life of a rechargeable battery is measured in time and temperature. Different types of batteries have different optimal storage requirements, but the time scale is a few years and Wall*E takes place 700 years after the Earth was abandoned. Could Buy N Large have built a battery to last 700 years? Absolutely! But would they?

Buy N Large has created a disposable society. Why build a battery that lasts 700 years when you can just throw it out and make a new one?! And who wants last year's battery when next year's batteries will be better?! This is obvious for their consumer products, but the robots are different.

Like many predatory corporations, Buy N Large is happy to sell you a non-sustainable lifestyle so you'll keep buying. Cheap in the short-term, expensive in the long. But Buy N Large itself would be ruthlessly efficient taking short term loses to ensure long term profits. The durable, sustainable, smart, self-repairing robots of Wall*E are an investment in the future of low cost labor. Might Buy N Large develop long shelf life batteries for these robots? It's plausible if they thought it would save money in the long run. Would they last 700 years? Probably not... but the law of averages says some of them will, and there's a lot of dead robots to average it all out.

The fact that so much infrastructure is still standing (buildings, ships, highways...) after 700 years is a testament to how well things could be constructed in 2100. The lack of life on Earth to pull everything apart would help preserve things, but there is still the corrosive effect of water and effect of ice expanding in cracks.

Not the answer you're looking for? Browse other questions tagged physics wall-e or ask your own question.

50
Why was Wall•E the only remaining Wall•E unit?
13
In WALL•E, why does everyone get thrown when the Axiom suddenly lists?
13
In WALL•E, what kind of economy was used on the Axiom?
5
Was the hyperdrive in WALL-E faster than the norm?
35
Why does Wall•E have recording equipment?
29
Are there other cruise ships in WALL•E universe?
10
Was the pea plant the first plant found in Wall-E?
49
Were people in Wall•E illiterate?
43
What kind of plant did EVE find?