Are there any other weapons designed using lightsaber technology?

I know Darth Maul used a lightsaber staff which was basically two lightsabers end to end.

I had thought that lightsaber nunchaku would be amazing, but the fact that you'd rather quickly lose your own hand during a change over would be problematic!!

So are there any other weapons designed using this technology?

Lumiya used a Lightwhip, which was same technology.

Long ago in forgotten times when the Sith and Jedi fought for control of the galaxy, weapons there were of unimaginable power. Always at their heart a kyber crystal was.

It's also heavily implied that a similar crystal was later used in the Death Star. The canon novel Tarkin confirms this.

The designers are also debating the optimum configuration for the Kyber crystal assembly.

Her turbolasers are more powerful and faster to recharge than Imperial-era weapons, a product of kyber crystals harvested in the Unknown Regions.

Yes, there is. Darksaber. 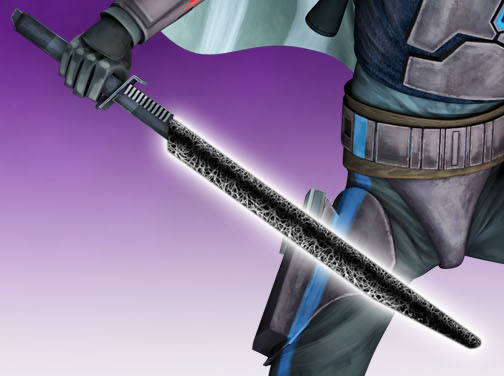 Currently, it is owned by Darth Maul who won it from Pre Vizsla (Star Wars: The Clone Wars).

The Death Star's super laser was developed with Lightsaber technology, along with an ancient array of weapons of mass destruction.

According to legend, the ancient Sith used massive kyber crystals to create superweapons; during the Clone Wars, the Geonosians revived the superlaser design. starwars.com

This is a new addition to Disney Canon, though.

In Star Wars Battlefront 2 there is a downloadable character that wields lightsaber nunchucks. Video.

1
Has there ever been a "light" weapon other than the lightsaber?
31
Are there non-weapon items in the Star Wars universe based on lightsaber technology?
18
What advantages/disadvantages does a Darksaber have over a lightsaber?

13
What goes into the design of lightsaber hilts?
57
Lightsaber blade "weight" in-universe
9
Are there any hyper-drive based Star Wars weapons?
1
Why are the First Order's weapons designed this way?
21
Which predictions of The Last Jedi: Darths & Droids Bingo were correct?
4
Are there any non-Valyrian steel ancestral weapons other than dawn?