What is Mr. Data's full name?

What is the full official name Doctor Noonien Soong gave to his android (known in ST: TNG as "Data")?

Is the entire name simply Data, or is it an acronym?

In the second season episode "The Measure of a Man", Riker pulls up Data's schematics on a wall monitor. On the lower right of the display, we see "LT CDR NFN/NMI DATA" which should be read as "Lieutenant Commander No First Name No Middle Initial Data." 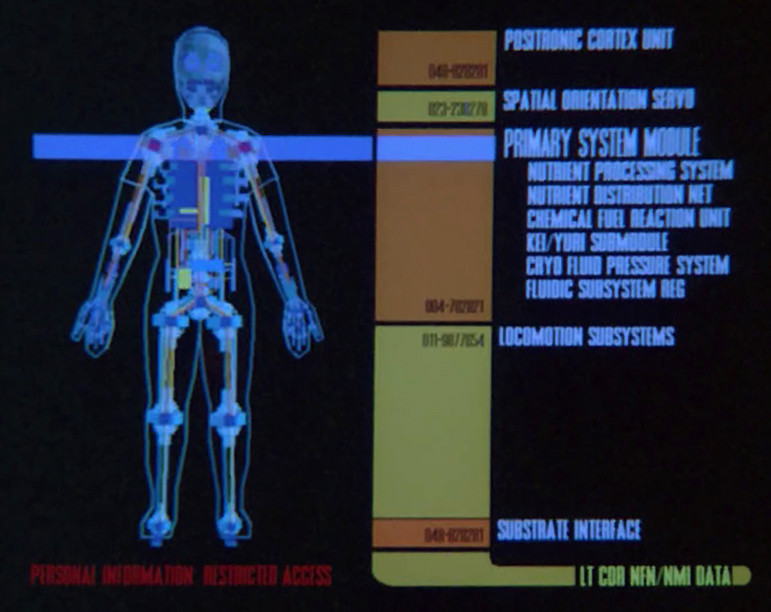 This was confirmed by illustrator Rick Sternbach during the "Next Generation Slide Show" panel at Baycon 1989.

Also from Measure Of A Man, this is Data's full name as shown by the Enterprise computer (to Cmdr. Riker): Lt. Cmdr. NFN NMI Data. Spelled out, this becomes: Lieutenant Commander "No First Name" "No Middle Initial" Data.

According to StarTrek.com database his full name was simply Data.

I don't recall hearing or reading about the origin of the name but it always sounded right :)

Data was initially a nickname given to him by Starfleet personnel. Data did not recall his life prior to being metaphysically born again by being turned on after a memory wipe. Thus, to the OP's question, we don't know what Doctor Soong named him. We can presume he was given a first name, because Lore had a first name. It's a compelling thing to wonder if Data ever considered adopted the surname Soong in some fashion.

I appreciate the challenge below to back up my answer. It would seem I was partially correct; Data chose his own name.

TASHA: You were just lying out there in the open? No identity record, no instructions?

DATA: Only a layer of dust.

DATA: Opening my eyes. Looking into the eyes of the Tripoli landing party. They believed that the signal device sensed their presence and activated me.

In the prologue to the novel adaptation for Encounter at Farpoint by David Gerrold, Data chose his own name, due to his love for, and identification with, knowledge.

20
What does it say on Data's suitcase?

7
Did Starfleet Research departments try to make use of Data's experiment to produce another android (Lal)?
4
Were there any plans for Dr. Noonian Soong to create a mate for Data?
4
How long did it take Data to build Lal?
12
Is there any information about Data after Nemesis?
39
Why does The EMH Doctor feel emotion, but Data does not?
5
What was this character thinking in "Brothers"?
4
Why Build Data?
6
Were Data and Lore created as a 'pair'?