Is Fury still a Colonel?

Nick Fury holds the military rank of colonel in the original canon of the Marvel universe. In the new Marvel Movie Universe, is Fury still Colonel Fury? I only remember him being referred to as "Director Fury" in the Avengers film.

Long Answer: The cinematic version (Earth 199999) of Nick Fury has not had his past fully revealed as of yet. The Earth 616 Fury is the one who is a colonel, having served in WW2.

The Ultimate Nick Fury, whom the cinematic version is largely based on, is a colonel and a war hero, having participated in the Cold and Gulf wars in some capacity.

It's important to remember that S.H.I.E.L.D is not a military division despite having access to equipment and assets otherwise only available to military. The Earth 616 version was originally a law-enforcement version (which might have ranks such as colonels), but has since been updated to being a government agency, which typically do not have those ranks. Similarly, Ultimate SHIELD was a military organization. The Earth 199999 version, however, was founded by Howard Stark and possibly Fury - implying that it has never been a military organization.

In Captain America: Civil War during the ending scene if you observe Fury's grave you will see that "Col. Nicholas J. Fury" is written.

My guesstimate is that Colonel was his highest rank before joining S.H.I.E.L.D., and though it is unclear what he was referred to as before becoming its Director, both titles may now be applicable.

In all of the official MCU comics up until at least about the end of Hulk and Iron Man 2, he is almost exclusively referred to as Colonel Fury, even by Coulson: 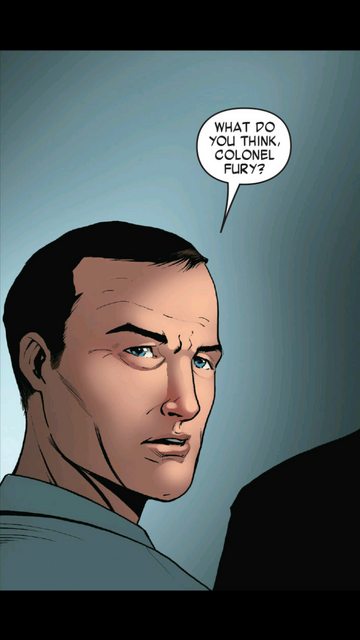 I'm pretty sure that the organization in the movies is not a military organization, and is similar to some of the three-letter agencies in the US. Since his authority is at least as high as a general, I think Director is the best title that fits.

12
What are the positions of Maria Hill, Victoria Hand, and Nick Fury in the MCU?
17
Who's on the Top level of clearance in the S.H.I.E.L.D. if its not Director Fury?
1
What is the current position of Nick Fury in S.H.I.E.L.D.?
26
What was SHIELD doing during the Battle of New York?
10
Why aren't MCU movies featuring Coulson after Avengers?
3
What were Nick Fury and Maria Hill up to during Civil War?
10
Why didn’t Fury ask for Captain Marvel’s help earlier?
12
How old is Nick Fury?
9
How does Fury know about this in Spider-Man: Far From Home?
23
Is the MCU origin for the "Avengers” name consistent with the comics?