What's the reason for the purple hair on the British 1969-70 television series “UFO”?

At the moonbase, the control center personnel (mostly women) wore purple wigs. Is there a reason for this?

Gerry Anderson was the producer and his wife, Sylvia Anderson, did the costume design. The wigs were her idea. One reason for the wigs, originally, was the idea that it would tame hair - women would wear wigs of special material to keep their hair from getting in the way (presumably more of an issue in lighter gravity) and to reduce any issues with static electricity in the sterile environment.

She considered them another part of the uniform. There is an episode where Lt. Ellis is seen on Earth and she has a regular (for the time, at least) hair style - no purple and no exaggerated widow's peak.

Sylvia Anderson felt there might be viable reasons for having women wear wigs in that environment to keep hair under control and also thought, in the future, it was quite possible uniforms could include wigs.

This is an out-of-universe explanation, but it also give an in-universe one. Wigs were part of the Moonbase uniform for women so their hair would not float around and the wigs were made of material that would not respond to static electricity. This material was also heavy enough to not float around easily.

It was simply another exotic SHADO uniform, like the net shirts with nothing underneath that men wore in the Skydivers.

In science fiction movies and TV shows that are set in the future, a major goal for designers of sets, props, costumes and make-up is to give the show a "look" that is futuristic.

Take, for example, this picture of Marty McFly in Back To The Future 2. This scene is set in 2015 (just two years from now!!) but when the movie was made in 1989, those 26 years seemed like a long time. So the designers went whole hog. Anti-grav, Mr. Fusion, and of course, those clothes. 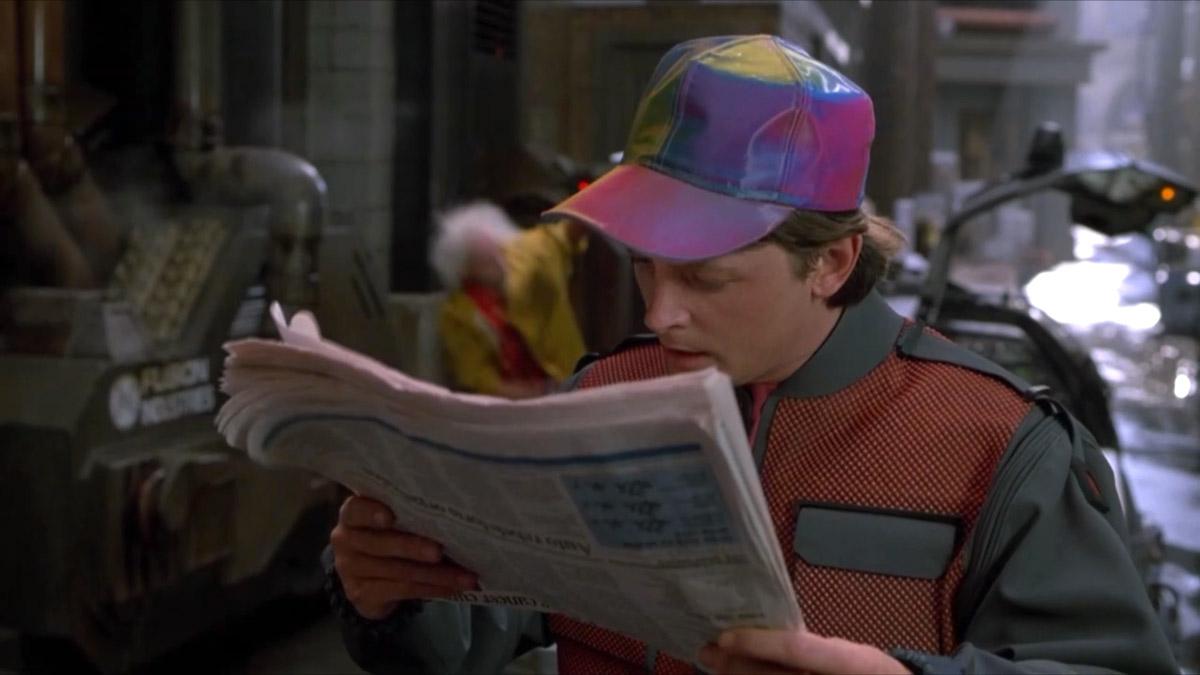 The joke is on them though. Turns out the differences between 1989 and 2015 are much more subtle than any of that.

So while the blue wigs, form fitting body suits and gull-wing cars may not have come to pass, they did give the show a distinctive, futuristic look.

Now, unfortunately, an in-universe explanation would be even less satisfying. Consider that these women are members of a military organization (SHADOW). While uniform policies for field conditions are mostly driven by operational requirements, policies for all other circumstances are generally obscure, arcane, and/or arbitrary. Some general on the uniform committee decided that collar length purple hair should be the standard for moon-base female personnel and voila! 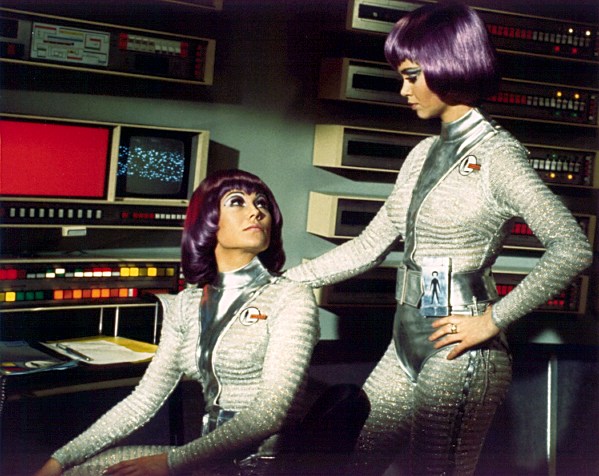 Because of futuristic virtual language of scifi's.. It looks very plastic, artificial, and attractive somehow. And also looks energitic, which referings an abstraction of high tech that "looks like magic".. We can also think of it as alienation, and hybridizing.. so colors can talk so much more than words..

Given that the series first aired in 1969-70, this was when colour television first appeared in the UK, so it may have been simply to give a startling look to a programme for those few who could afford colour sets. Look at some of the garish sets on "Top Of The Pops" in the early '70s, for instance.

3
Why did Stingray have a number 3 on its fin?
3
Contents of each pod for Thunderbird 2
1
What aspects of Thunderbirds (2004) did Gerry Anderson dislike?