Why are observers only from our universe and not from other universes?

(If there are no observers in other universes, that means our observers are the only humans from the future who have issues with their environment. The humans in the futures of other universes must have no issues like that and never want to invade their "past".)

I have a theory regarding this. My theory is that the Observers are originally from the alternate universe. The reason we don't see them invade the alternate universe in the show is because invading your own past is silly and could cause all kinds of trouble. See below for a more detailed answer with reasonings and even a picture: 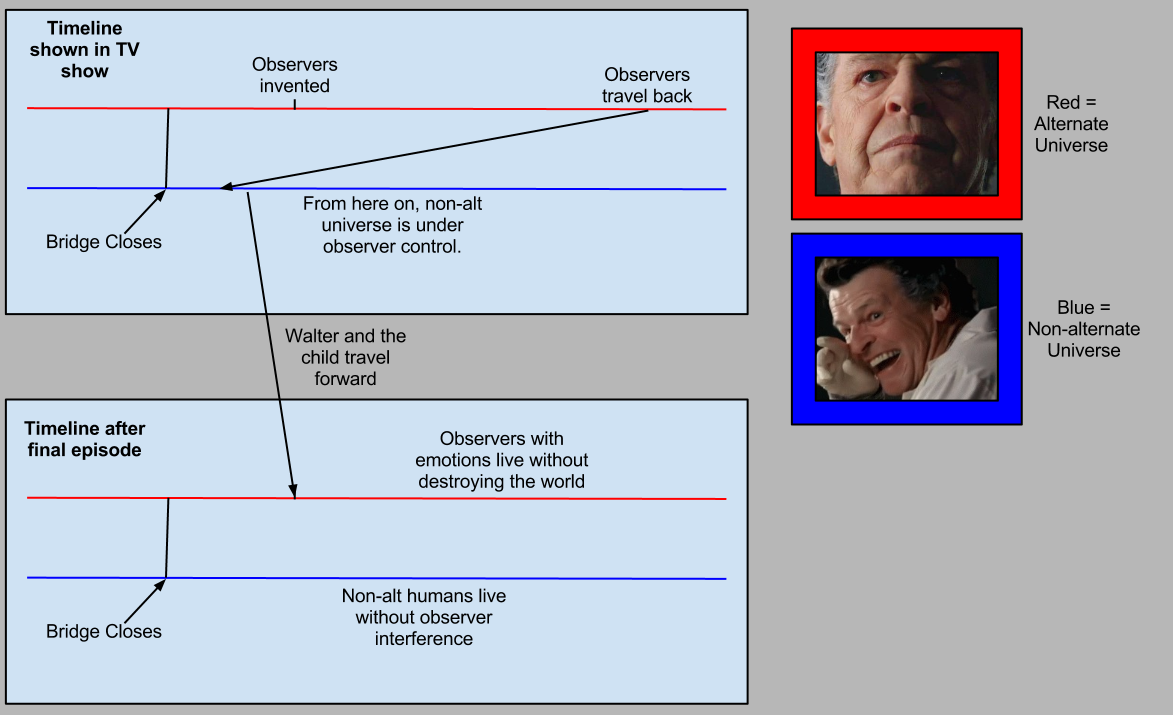 I think that the observers in Fringe that take over the past in the last season are all from the alternate universe.
Something that really bothered me in the final episodes is that the alternate universe appears to be completely untouched by the observers. Perhaps they just didn't know about the universe? That seems implausible. They are masters of time and space, surely they would would have rediscovered the alternate universe. Even if they didn't, they would know about it from the reports of the research team which September was part of. They can even travel there with apparent ease, we see them teleport there much in the same way they teleport through regular space.
This leads me to conclude one thing. The observers are from the alternate universe. We know that they are logical and calculating. The chief observer in the future does not want to alter their plans as they have all the probabilities worked out. They will only do something which benefits their own kind. If they were to go back and take over the start of their own timeline, then they could risk disrupting their own creation. Also, if they were to live in their own past, wouldn't it make things worse in the future (less resources etc).
Another thing to think about is why did they choose to come back and take over 2015? Why not earlier? 2015 is only a few years after the bridge is closed. It is possible that it would be the last time the two universes would have any major interaction. If the observers were to go back pre-bridge closing then they would have an effect on their own timeline.
This theory leaves some questions however. First, what becomes of humanity in the non-alternate universe and why couldn't the observers take over there? It's possible that non-alt universe humanity is too much of a challenge for the observers to invade in 2609. In the timeline that the observers are in, the observers could have already taken over the non-alt universe (they would know the outcome of their actions instantly since they are in the future).
Secondly, why does taking Michael to the future end the observer's reign? I think that perhaps he was taken to the alternate universe future (since the future of the non-alt universe would be under observer rule). Donald doesn't explain this to Walter or the gang either because he doesn't think it's important or he doesn't think the others would understand (he knows physics that they can't even comprehend, it's plausible that he wouldn't want to overload their minds with unnecessary details).

Clearly whatever the reason it was a choice made by the observers, since we can see Observers entering the alternate universe without difficulty in 5-13.

If the observers were from the alternate universe, how would sending the child observer and Walter into the future (in their universe) change the plan that occurred in the late 22nd century (suppressing emotion to benefit intelligence)? To me, it does not make sense that the observers are from the other universe.

I don't really have a theory as to why they haven't invaded the alternate universe, other than perhaps they want to take on one at a time. One of the observers states that they chose the time period they did because there was a 99.999% chance of success. Perhaps it is simply that this universe at this time is where they concentrated their efforts based on probability.

Towards the end of season 5, the origin of the Observers became clear:

The human race rewired the emotional centers of the brain to instead increase human intelligence. This work began in Oslo, Norway, in 2167.

It always was pretty clear that the other universe was more technologically advanced than this one. But they're not just more advanced, they also had to deal with some problems that our side never had to. Most significantly, the vortexes and the resultant need to amber them probably left the alternate universe more reluctant to embrace some technologies. I wouldn't be surprised at all to see a back-to-basics culture in the years after the bridge was closed and the universes were healed.

That's just speculation, but it's pretty clear that there are some societal differences between the two universes, and it's hard to say how much more they might diverge in the decades between the series and the creation of the Observers.

Alternatively, perhaps that means the other universe does, eventually, decay from the remaining damage before they could develop, meaning it doesn't have a sustainable future for them.

I believe the Observers only invaded this universe because this is the universe which evolved to create them in the future of this universe. So in order for them to have an origin environment that suits their particular and specific needs, they would need to invade the universe, which eventually spawns themselves. Since they know and live in this universe in the future, they already know that it’s the correct environment for themselves. I also think it’s impossible that they could be from the alternate universe because when Walter, Peter, and Olivia wake up after being in the Amber all those years, it was in their own universe that was being invaded, when they met with their daughter and such. So since it was happening in their own universe, I highly doubt it was the alternate that the Observers were from. These are just guesses of course!

12
Why are there only 2 universes that are visitable?
8
Are the Observers really from our universe?
15
Why are the two universes in Fringe not more divergent?
6
Why did the Observers invade?
13
What paradox was Walter Bishop's plan supposed to avert in the series finale of Fringe?
4
Universe Colors
6
How did Walter send back the Machine in the Amber Timeline?
0
Is our universe stronger than the alternate universe?