Who are all the characters to have touched The One Ring?

Who are all the characters in The Lord of the Rings to have touched The One Ring, actually worn it on their fingers, or otherwise had it in their possession (even for a brief period of time)? Please indicate the type of contact, duration, order, and any other pertinent information.

This question addresses who wore the ring, but to answer the [pre-edit] question:

From the LOTR Wikia, including momentary 'bearers': 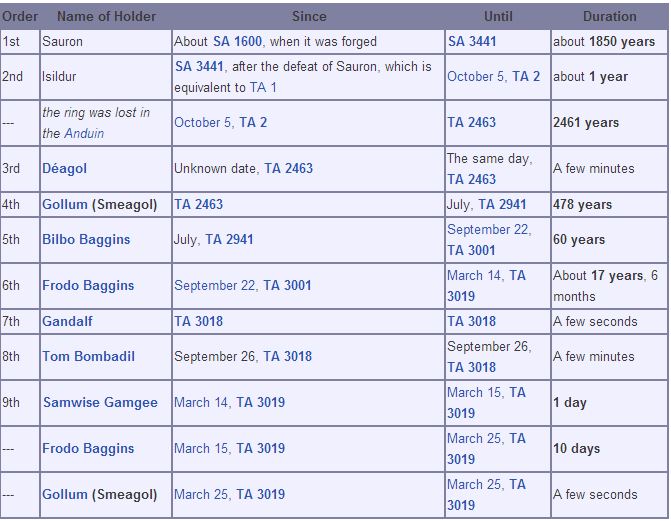 Sauron wore it... though in the movie it is worn over a glove... but that means nothing in the grand scheme of things.

Isildur wore it. This was why he could not bring himself to destroy it.

There was never a real list of what might have happened to it After Isildur wore it as the thing was 'lost' and found in the river.

Déagol touched it, since he was a poor river thing I would admit that it was skin contact on the hand and probably why he would not give it up to Sméagol and Sméagol had to kill him for it.

Sméagol wore it and it turned him into Gollum.

Bilbo wore it as that was how he escaped Gollum, and subsequently uses it after that.

Frodo wore it, as that was how the story and movie was based.

and he was wearing it when Gollum bit it off his finger.

Gandalf touched it, more than likely skin contact as to why you see him toss the ring down and recoil from it, to place the ring in something protective to give to Bilbo.

Bombadil wore it, and the ring disappeared rather than Tom disappearing.

Samwise touched it and wore it as a necklace for sometime until Frodo was back. I believe he never wore it on his finger, though I would like to conclude he might have made a better ringbearer.

and died with it when the ring was destroyed.

19
Other than Sauron, Gollum, Frodo and Bilbo, did anyone ever possess the One Ring for long enough to be affected by it?
15
How many different wearers of the One Ring were there?
17
Was Gandalf ignorant of the effects of Frodo having the ring for 17 years?

9
Are the 9 Nazgûl rings visible when worn?
46
What did Bilbo Baggins do while the Fellowship of the Ring went on their quest?
472
Would the One Ring even work for anyone but Sauron?
21
Ring-bearers - who can notice what about whom and when?
104
Why not let a dwarf carry the One Ring to Mount Doom, since their will cannot be dominated by the rings of power?
29
What was JRR Tolkien's inspiration for the One Ring?
19
Other than Sauron, Gollum, Frodo and Bilbo, did anyone ever possess the One Ring for long enough to be affected by it?
80
Why not encase the One Ring in solid metal?
26
What does Gollum see when he puts on the Ring?