Did Owen and Beru Lars ever meet R2-D2 during the events of prequels?

Did Owen and Beru Lars ever meet R2-D2 during the events of prequels?

I would be primarily interested in canon (3 prequel movies), but if there are no such instances in canon, an answer based on Legends is fine.

(I'm thinking of 2 possible instances: either when C-3PO was living with Shmi; or when R2-D2 accompanied Anakin to Tatooine when she was killed, would be my own 2 main possible guesses).

YES, R2-D2 accompanied Anakin to Tatooine and got out of the ship during Shmi's funeral: 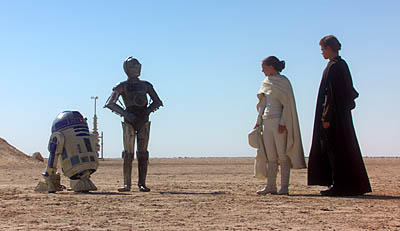 From the Attack of the Clones script

ANAKIN, PADMÉ, CLIEGG, OWEN, BERU, and THREEPIO are standing around Shmi's grave. Two other headstones, one smaller than the other, stand in the blazing suns.

CLIEGG: I know wherever you are it's become a better place. You were the most loving partner a man could ever have. Goodbye, my dearest wife. And thank you.

Brief pause. ANAKIN steps forward and kneels at his mother's grave. He picks up a handful of sand.

Silence. Then BEEPS and WHISTLES are heard. They turn as ARTOO rolls up.

PADMÉ: Artoo, what are you doing here?

C-3PO: It seems that he is carrying a message from an Obi-Wan Kenobi. Master Annie, does that name mean anything to you?

19
Are there any published details of Kenobi's communication with Lars family on Tatooine before ANH?
2
Where was C-3PO between the time of Anakin departing Tatooine and Shmi's death?
15
Could Uncle Owen and Aunt Beru have children?
22
Who gave the order to kill Owen and Beru Lars?
38
Why did Luke leave Owen and Beru's remains?
22
Did young Luke learn of his grandmother's burial at the Lars homestead?
6
What is the nature of Luke's scanner used to track and find R2-D2?
6
Why didn't Luke know about Anakin Skywalker?