What was John trying to do by chanting "Into the light I command thee"?

Near the end of Constantine, before John is interrupted by Gabriel, he is holding his forearms together chanting "Into the light I command thee!". Why; what was he trying to do? It seems like Mammon was pushed back (for the moment?), so the immediate danger was resolved.

Mammon wasn't gone, and John knew that. Mammon was not actively trying to claw his way out, at this point, but the danger was still there, as we saw when Chaz, flush with pride after the apparent victory, took pride in their accomplishment and was killed for his troubles.* But despite the fight, Mammon couldn't come out on his own, he had to have help.

But John wasn't working on Mammon at the moment; John was trying to bring forth whatever that 'Help' was.

We know from the prophecy in the Hellish Bible that Mammon would need help; the heroes assume that the Blood on the Spear will do the task. What they don't know is that it needs a heavenly agency to actually do the freeing. The picture that goes with the prophecy shows the Spear, but if you look, it's being used by an Angel. (The audience sees this, but since John and Angela are driving and having info relayed to them by Beeman, this essential bit of information is missed by our Heroes. Beeman saw it, but never had a chance to tell them.) 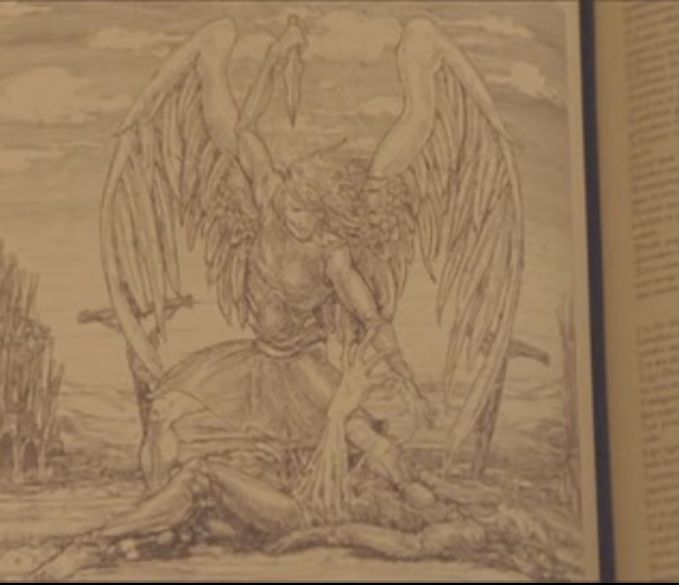 Whatever being (Gabriel) was helping was doing so from the shadows, staying unseen. John finally realized that there was someone else helping Mammon and was attempting to force the 'helper' into the light. Gabriel didn't intervene, as it would appear at first look, so much as John forced him to show himself. Note John's first comment when Gabriel appears: "Gabriel... it figures.'

Also, if you notice, while John was giving his 'command', you see a shadowy pair of wings appear and eventually coalesce into the form of Gabriel. Gabriel comments that 'Your ego is astounding' when he appears; the idea that John could in any way 'command' him to appear seeming to amuse him. (More foreshadowing; per tradition no one save God could command an Angel (unlike demons; they could be commanded by invoking God's power), but shortly afterwards, Lucifer comments that 'Looks like somebody doesn't have your back anymore...', when Gabriel tries to smite him with God's power/support. John may well have forced Gabriel to show himself, and Gabriel just thought that he had chosen to do so on his own.)

Gabriel's fate is foreshadowed, too -- the FIRST picture we see of Mammon in the Hellish Bible shows the same figures as the second (above; poised with the Spear of Destiny),.. except the Angel shown once Mammon is free no longer has wings. 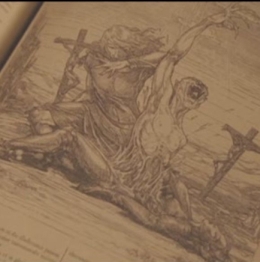 The scene in question happens at 1:34:16 in the film. Chas has just been thrown into the ceiling by an invisible force. John Constantine creates an invocation using the Alchemical Red King symbol tattooed on his arms to 'make that which is invisible visible'.

Enraged, John scans the empty room, sees a large SHADOW on the ceiling that doesn't belong to any object. He holds back a cough long enough to rip up his sleeves and slams those tattoos together --

It takes every ounce of John's life force to keep this spell alive and when he's about to drop from exhaustion the shadow is brought fully into the light -- becomes that familiar shape of WINGS.

VOICE OF MAN (O.S.) Your ego is astounding.

John strains to see the shadow become the real thing -- the majestic wings of an angel.

It's worth noting that in the original script Constantine has already used this spell/invocation once before to try to determine who's attacking Beeman. This spell is ineffective because the attacker has already left;

John is choked by a cough -- can't finish -- arms separate and he buckles to his knees, reveals to Angela just how ill he really is. She leans down to him, sees hints of blood on the floor.

Not the answer you're looking for? Browse other questions tagged dc constantine-2005 constantine or ask your own question.

10
What was injected into the doctor at the beginning of The Dark Knight Rises?
16
Do the events of The Dark Knight Rises prove Joker was right?
13
What chemicals did The Joker fall into?
9
Why was Harley recruited into the squad?
3
Where was "The Light" in Impulse's Dystopian Future?
5
Different ending(s) to Constantine the movie?
3
What was the stuff Dr. Destiny attempted to inject into batman?
1
In "Batman: Arkham City" what is the choir chanting when Batman fights Ra's Al Ghul
9
Trying to find the comic this page featuring Wonder Woman, the Atom, and Batman was taken from