What is the original context of this Spock video clip?

This clip has surfaced on the internet, and was particularly brought to my attention alongside a caption that implied Spock was examining a rather attractive derriere. I find it generally unlikely that this properly describes the original context of the clip, but the expression does (to me, at least) appear to be rather un-Vulcan.

Could anyone tell me which episode this clip is from, and what is its true context?

The Original Series 1x08, Balance of Terror (remastered), at about 16 minutes and 10 seconds in.

The crew just got a view of the Romulans inside their ship, and were startled to see they look very much like Vulcans. This sparks suspicion in some crew members, given Spock's half-Vulcan heritage.

They're trying to make sense of some Romulan transmissions when this scene takes place. The part of the scene the clip is taken from is in bold-italics.

[The camera is following Kirk as he walks around the bridge. Kirk stops next to the Captain's seat. Uhura is at her station in the background. Lieutenant Stiles is at the helm in the foreground]
Kirk (to Uhura): Decoding?
Uhura: Cryptography is working on it, sir.
Lieutenant Stiles: Give it to Spock.
Kirk walks towards the helmsman.
Kirk: I didn't quite get that, Mr. Stiles.
Kirk stops one step past the helmsman's seat, his back to Stiles.
Lieutenant Stiles: Nothing, sir.
Kirk: Repeat it.
[Camera switches to Spock, at his station.]
Lieutenant Stiles: I was suggesting that Mr. Spock could probably translate it for you, sir.
Kirk: I assume you're complimenting Mr. Spock on his ability to decode.
During Kirk's line, Spock bites his lip on "complimenting" and then looks at Kirk on "decode".
[Camera switches back to Kirk & Stiles, with Uhura still at her station in the background.]
Lieutenant Stiles: I'm not sure, sir.
Kirk walks back to about a step behind the Stiles chair. He then turns the helmsman's chair, so that Stiles looks Kirk in the eye.
Kirk: Well, here's one thing you can be sure of, Mister...
[Camera closes in on just Kirk & Stiles.]
Kirk: ...leave any bigotry in your quarters. There's no room for it on the bridge. Do I make myself clear?
Lieutenant Stiles: You do, sir. 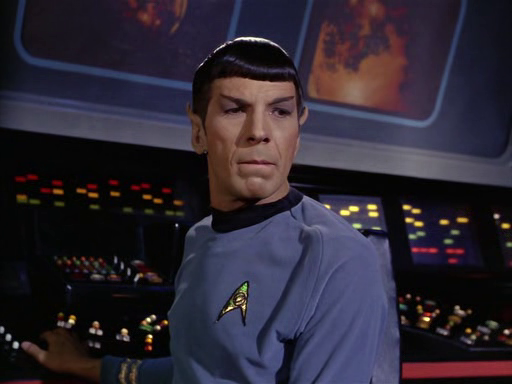 Not the answer you're looking for? Browse other questions tagged star-trek star-trek-tos episode-identification meme or ask your own question.

30
Is this from an actual episode of Star Trek: The Next Generation?
6
Which season/episode is the "Picard Engage Photo" from?

0
Identify the source of this Superman video
8
What is the earliest instance of Spock being called "Dr. Spock"?
34
Kirk and Spock friendship in Original Series
11
What, exactly did Starfleet have "invested" in Mr. Spock?
7
Were there hints about a romances between Spock and Uhura in The Original Series?
7
Changing mores: Were there any viewer complaints when Dr. McCoy called Mr. Spock a "half-caste" in TOS or did the context make the term excusable?
10
What TNG episode is this clip of Jean-Luc Picard wearing a suit from?
52
What is the context for this panel of Captain Marvel(Shazam) and a vibrating mechanical horse?
11
What do Spock and Kirk eat?
2
How did Scott and Spock identify this individual?