Identify movie with monster (alien?) that has some kind of proboscis/trunk

I watched it as a kid, which was probably before or around 1990. The scene that i remember featured some kind of social event and then there was that weird alien/monster with kind of a proboscis/trunk. I believe it was considered friendly at first, but then (for some reason) mutated into a not-so friendly thing. Panic broke lose and in defense, someone cut part of the proboscis but it immediately grew back. Some man was hiding under a table and when he was trying to look what was going on, the "monster" tramped down his head but somehow in a funny way (i believe there was no blood/gore involved). This may sound weird but its somehow stuck in my head i would really like to know what film this is from.

I finally found it myself. I did some research and its no wonder that it was hard to track down.

It was created in 1981 by two countries that no longer exist in the geo-political sense, namely Yugoslavia and Czechoslovakia. Two versions of the film were made, the Yugoslavian title was 'Gosti iz galaksije' (which translates as 'Visitors From The Galaxy") and the Czech version was called 'Monstrum z galaxie Arkana' (which can be translated into 'Monster from the Galaxy Arcana'). 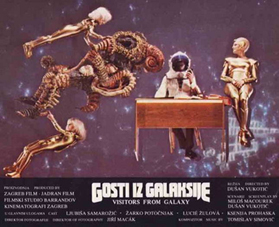 A very brief plot summary from IMDB: "A science fiction writer is gifted with the ability to materialize his thoughts and inadvertently brings a group of aliens to Earth."

There also is a dubbed german version, which is the one I watched as a kid. According to this source, it was broadcasted on the free-TV channel ARD around 1990. However, I found no way to watch this version or to get a copy.

Scans from a german magazine from 1983: 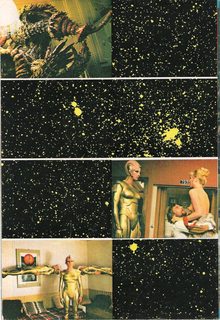 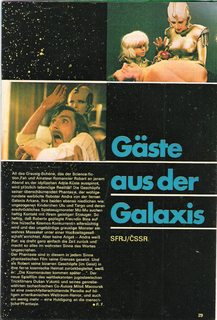 I don't know if a version dubbed in English exists, but you can find the Czech version with English subtitles on Youtube.

I just watched it again and I understand why it disturbed me as a kid. Its really weird sci-fi trash but somehow a gem of this genre, in a similar way like "Dark Star" is. Sadly, the quality is just awful, but that was to be expected. I highly recommend to give it a try, but you have to keep an open mind ;)

12
Trying to find out the title of a SF TV series
7
A woman on some kind of spider web being raped by some kind of spider alien/monster?
7
Story about old video game console, a yard sale, and giant robotic cockroaches?
11
Movie from the 80's/90's with a deadly virus that makes people spew virulent goo
12
Book with fire monster, alien girl and dog, and corvette?