Is the Aliens' blood a mundane but currently known acid, or something more exotic?

I just recently read an answer to another question that suggested that the xenomorph's (I hate that term, ugh) blood was hydrochloric or hydrosulfuric acid.

Is there anything in the first few movies to suggest this is so? I had the impression from the original movie (which I admit I haven't watched in several years) that this was something more like a philosophically ideal acid than anything made out of atoms/molecules.

So is this a mundane acid, or some exotic sort of matter?

Please exclude the AVP movies and Prometheus from consideration in the answer. Everything else is fair game.

The acidic blood of the Xenomorph is well within the boundaries of conventional science as far as powerful acids are concerned. As for the biology of such an acid and how it would be used in the Xenomorph metabolic process, that is beyond my ability to judge.

"Molecular acid" is a tautology. All acids are made from molecular compounds or groups of various active molecules, so the phrase was the sign of a writer too busy or too lazy to give it a name. With that said, there are acids we know about today which make hydrochloric or hydrosulfuric acids seem like pancake syrup by comparison in terms of their ability to interact with matter. 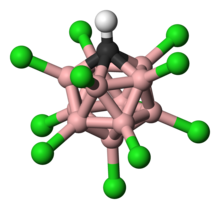 These highly active molecular compounds are called carboranes and considered to be superacids. They do not break down while dissolving other materials, so their potency is both everlasting and millions of times more effective than conventional acids.

A carborane is a cluster composed of boron and carbon atoms. Like many of the related boranes, these clusters are polyhedra and are similarly classified as closo-, nido-, arachno-, hypho-, etc. based on whether they represent a complete (closo-) polyhedron, or a polyhedron that is missing one (nido-), two (arachno-), or more vertices. Carboranes have been used to make solid superacids. Solid superacid catalysts alleviate the need to dispose of spent acids, thus providing a significant environmental advantage over dissolved acids. The carborane superacid H(C-H-B11-Cl11) is one million times stronger than sulfuric acid. -- Wikipedia

Acid strength however can be independent of an acid's corrosive nature. Carboranes, while potent, are considered strong-but-gentle because they can be held within laboratory test tubes without special glass. An acid's ability to eat through materials depends on the reaction of the acid in question. For years Fluorosulfonic acid and trifluoromethanesulfonic acid were some of the world's reigning champions, so powerful they could barely be contained. They would cause a reaction with the silicon in glass and dissolve it.

These acids are the strongest acid as single isolable compound, meaning they are acids without the addition of other compounds.

There are even stronger acids than these when mixing two compounds together. An example would be a mixture of Antimony pentafluoride (SbF5) and fluorosulfonic acid which is even stronger than any single isolable compound. While fluorosulfuric and pentafluorides are strong acids, both degrade with reactions, leaving acid wastes making them less desirable for certain chemical reactions. 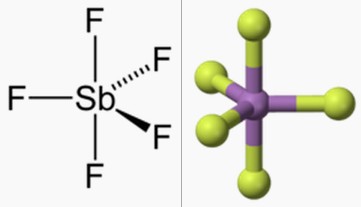 Aqua regia first appeared in the work of medieval European alchemist Pseudo-Geber, dating from the 14th century. Antoine Lavoisier called it nitro-muriatic acid in 1789. Aqua regia (lit. "royal water"), aqua regis (lit. "king's water"), or nitro-hydrochloric acid is a highly corrosive mixture of acids, a fuming yellow or red solution. The mixture is formed by freshly mixing concentrated nitric acid and hydrochloric acid, usually in a volume ratio of 1:3. It was named so because it can dissolve the so-called royal or noble metals, gold and platinum. However, titanium, iridium, ruthenium, tantalum, osmium, rhodium and a few other metals are capable of withstanding its corrosive properties. - Wikipedia

In a recent article published on the thirtieth anniversary of the movie "Alien" it was revealed:

To create an acid/smoke effect, Richardson said they combined titanium tetrachloride, cyclohexylamine and acetic acid, along with yellow dye.

Titanium tetrachloride is the inorganic compound with the formula TiCl4. It is an important intermediate in the production of titanium metal and the pigment titanium dioxide. TiCl4 is an unusual example of a metal halide that is highly volatile. Upon contact with humid air, it forms spectacular opaque clouds of titanium dioxide (TiO2) and hydrogen chloride (HCl). Both of these byproducts are extremely toxic and may have made the filming quite difficult.

Dallas: [looks at a pen being dissolved by alien's body fluid] I haven't seen anything like that except, uh, molecular acid.

Brett: It must be using it for blood.

Parker: It's got a wonderful defense mechanism. You don't dare kill it.

While the term "molecular acid:" is meaningless pseudoscience, it is significant that they don't say it is like any more common acid, so I'd say it is, as you put it, something more exotic.

It is possible for a biological organism to create surprisingly corrosive chemicals.

Let's take a look at how we break down food first. Now when it comes to biology the use of HCl does a very small fraction of the work when it comes to digestion, in fact most of the work is done by enzymes and bile. Some people even Have their stomach removed with very little impact to their life. This is because bile and a majority of the digestive enzymes are pumped into the small intestine by the liver and pancreas.

So looking at human digestion we can hypothesise that most of the corrosive action of the alien's blood is probably not the responsibility of one single acid but a complex of enzymes. Enzymes are a biological catalyst which increase the rate of reactions. Most enzymes are proteins (long chains of amino acids that act as molecular machines for the cells aiding in movement, communication, etc.) and because of this they can be made to interact with very specific compounds and in specific conditions, which could explain why the alien's blood doesn't harm the alien itself.

it has been theorized that the blood could be some type of "hydrosulfuric" or hydrochloric acid composition due to its corrosiveness and its conspicuously toxic effects on living human tissue. It has also been proposed that the Xenomorphs are immune to their own acidic blood due to an endobiological build-up, similar to the human stomach's ability to protect itself from its own digestive fluids. It has also been theorized that the blood is fluorine-based, and that the Xenomorph's protection system against its own toxic acid is essentially a bio-organically produced Teflon insulation within its body, since polytetrafluoroethylene (PTFE, or Teflon), being a fluorine-based compound, does not react with hydrofluoric acid. It is known that Xenomorph chitin is resistant to the acid even after it the creature has died or its chitin has been removed.
-Wikia

It might be something fairly exotic using elements not yet discovered. A possibility exists that E120 is stable and in fact could exist in nature. The fact that elements higher than 93 don't normally exist in nature could simply mean they were not present in the dust cloud that generated our Solar System.

I did theorize a while back that the possible discovery of Element 122 by Marinov could have been genuine but it was only a few stray atoms.

Instead of regurgitating a bunch of math at you, those superacids mentioned would be too strong for an organism to contain, they are almost impossible to contain. I'd imagine it would be somthing reasonably strong, such as perchloric acid.

Not the answer you're looking for?Browse other questions tagged alien-franchise or ask your own question.

18
Are the aliens from the Alien movie series more hive minded or more like individuals?