In Iain M. Banks', fairly rockin' Culture novel, Consider Phlebas a good third of the book takes place on what is called the "Vavatch Orbital". An orbital is apparently a massive artificially created megastructure, similar to the Death Star or the titular Halo.

Wikipedia tends to suggest that all orbitals are rings, but then why the mention of a sphere, or that Vavatch is not big enough to be a ring? 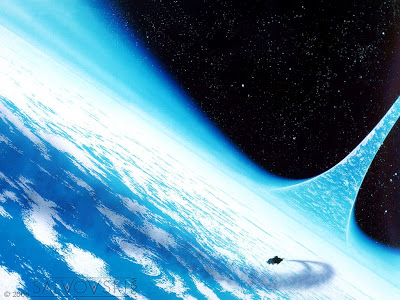 'It is what they call an Orbital; a band of matter in the shape of a very thin bracelet, orbiting around a sun - in this case the star Lacelere - in the same zone one would expect to find an habitable planet.

'Orbitals are on a different scale from our own space habitats; Masaq', like most Culture Orbitals, has a diameter of approximately three million kilometers and therefore a circumference of nearly ten million kilometers. Its width at the foot of its containing walls is about six thousand kilometers. Those walls are about a thousand kilometers high, and open at the top; the atmosphere is held in by the apparent gravity created by the world's spin.

'The size of the structure is not arbitrary; Culture Orbitals are built so that the same speed of revolution which produces one standard gravity also creates a day-night cycle of one of their standard days. Local night is produced when any given part of the Orbital's interior is facing directly away from the sun. They are made from exotic materials and held together principally by force fields.

'Each Orbital is different and each Hub has its own personality. Some Orbitals have only a few components of land; these are usually square parcels of ground and sea called Plates. On an Orbital as broad as Masaq' these are normally synonymous with continents. Before an Orbital is finished, in the sense of forming a closed loop like Masaq', they can be as small as two Plates, still three million kilometers apart but joined only by force fields. Such an Orbital might have a total population of just ten million humans. Masaq' is toward the other end of the scale, with over fifty billion people.

IB-IIB-I
5111 silver badge11 bronze badge
New contributor
IB-I is a new contributor to this site. Take care in asking for clarification, commenting, and answering. Check out our Code of Conduct.
Add a comment  |
2

As others have mentioned, it's a large ring which rotates to generate centrifugal force to simulate gravity on the inner wall. The ring is in orbit around a star like a planet orbits a star (with the star far outside the circumference of the ring itself). In this way, the inhabitants inside the ring can watch the sun rise and set as the ring turns (imagine "midnight" as the time when they are closest to the sun, their feet pointed toward the sun, and it is obscured by the floor. And "noon" as when they are furthest from the sun, their feet pointed away from it, and it can be seen roughly overhead).

Other responses have neglected to mention that the surface of the orbital is also sloped toward the edges so that the inner surface looks like a parenthesis in cross-section. (If you were on the inner surface, with both edges equal distances, you would need to "climb" to escape the ring). This is explained as the principle reason the atmosphere stays inside the ring, as there's no solid ceiling. There is also a layer of artificial dust suspended in a magnetic field to shield the inner wall from solar radiation and create different climates.

Not the answer you're looking for? Browse other questions tagged the-culture consider-phlebas or ask your own question.

37
What is the order/timeline for Iain M. Banks "Culture" novels?
21
What is the significance of the last line of Iain M Banks' "Surface Detail"?
5
What is The Culture's industrial capacity?
38
What are the origins of the names "Just Read The Instructions" and "Of Course I Still Love You"?
10
What is the life expectancy in The Culture series?
12
What was the purpose of Uagen Zlepe's story in "Look to Windward"?
6
What is the light source on the Masaq’ orbital?