How does Zion population square with how it's built?

The Architect says that The One must choose 23 people (16 female, 7 male) to create new Zion.

After which, you will be required to select from the Matrix 23 individuals - 16 female, 7 male - to rebuild Zion.

How can one square those 3 facts?

It seems completely impossible to both generate a population of quarter million, AND all that advanced Zion infrastructure, in just the space of under 5-6 generations (100 years) if you start with 23 people. (Even allowing for non-natural population growth - i.e., culling out people from the Matrix, the way Neo was extracted. That seems a very labor intensive and non-scalable process - one ship can not extract more than a couple of people a day given its size and medical facilities).

Is there some canon explanation for this discrepancy? Are one of the two facts that Wikia lists incorrect/noncanonical? Did Architect lie to Neo? Do the machines somehow help build up Zion and populate it further?

Even in the present day, there are some countries with birth rates of ~7 children per generation. It's also not clear what the rates of extraction are; if the founders could manage an extraction a month for the first decade, and kept up the 2/1 male-to-female ratio, they could cut the births-of-women per woman down to about 5.15 to get 250k population after ~5 generations. If they could additionally maintain a skewed gender ratio, this could be consistent with what's observed today.

Thus, while certainly not consistent with lifestyle in modern industrialized countries, it is not completely impossible.

Here's an example scenario, assuming a first child at 15, two children every five years (equally likely to be male or female), a last child at 40 (a total of 11), that people are extracted at age 18 (including the founders) and are extracted once per month for the first 15 years, twice for the next 15, three times for the next 15, etc., that lifespan is 75, and that all extractions and births are gender-balanced: 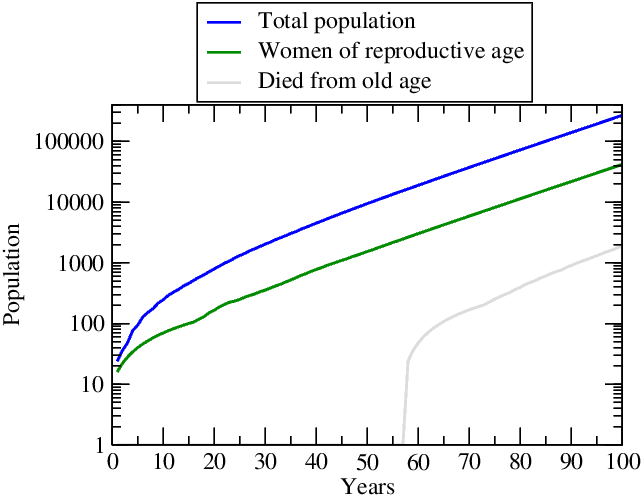 However, even though this generates the right number of people, the age distribution is kind of screwy; the median age is 11. Still, there are a non-negligible number of adults (~100k over 15).

IIRC there is no verifiable information as to what year it is. For all we know its 3199 or something. Plenty of time to rebuild a few times.

Also remember minds are being freed. So you have to add that to the formula above. The rate at which minds are freed will likely increase as the cycle continues and we closer to the anomaly.

OR Zion could just be part of the second level of the Matrix, and therefor not require any justification at all :)

Zion may have been created with only 23 individuals, but that does not mean additional people can't be unplugged to join Zion. Neo managed to make new people join the 6th Zion. The kid who taught Neo the spoon trick is one example.

Are we taking into account the breeding of freed folk?

And it seems like at the end of the cycle, 10 years accounts for a whole lotta people.

The WAR went for 100 years. What about the years before the war, when Zion was just trying to exist? I imagine there could easily be a few extra years if not decades before we are assuming the count starts, as well as the possibility that when Morpheus says 100 years, he's rounding down by a few years, 10 not being unreasonable to believe...

All in all, that's a lot of fudging room.

3
How much of Zion's population was Red Pills?

13
Why do the machines allow/initiate the building of a new Zion?
37
Why do they need “16 female, 7 male” to re-establish Zion?
5
Is the last “One” present at the re-founding of Zion?
4
Why does “The One” need to be awoken from the Matrix
14
Why did the “cataclysmic system crash” not happen?
10
What do the initial redpills think?