What became of the backup Doctor from Living Witness?

In the Voyager episode Living Witness a backup copy of the Doctor sets off to follow Voyager's path, to see if they ever made it home. As this copy of the Doctor did not begin his pilgrimage until roughly 700 years after being separated from Voyager, I would imagine much of Voyager's trail would have been lost and forgotten to time. This would have made following Voyager's path very difficult, although ultimately the destination would be the alpha quadrant.

Was it ever mentioned what became of this Doctor by anyone affiliated with the show? If there is no word-of-god fate for him, has his fate ever been brought up in anything else (books, etc)?

The EMH doctor activated in the Kyrian museum isn't mentioned in any further TV episodes or films.

There are, however a couple of fiction sources (non-canon) that relate to fate of the "Backup EMH" 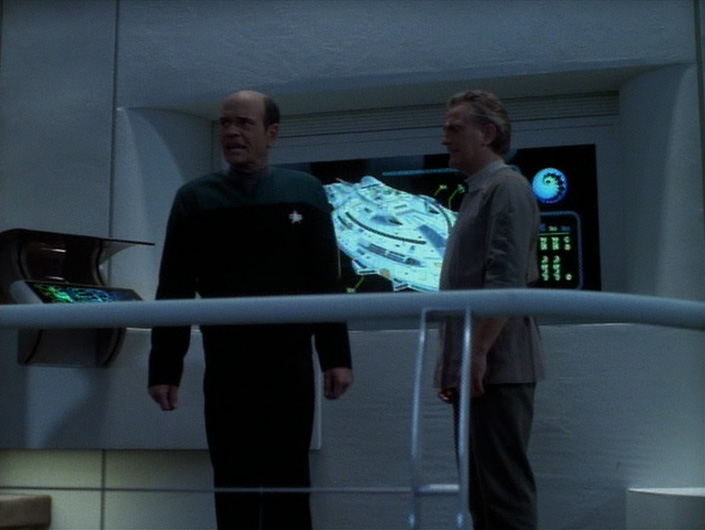 When Q came aboard Voyager in Voy: Death Wish he said humans would be in the Delta Quadrant in a few hundred years.

This means the Doctor wouldn't have had to go that far to run into a Starfleet ship.

QUINN: I, I'm not sure how. Humans. Humans. Who would have more recent experience with humans?

Q: What have you done now, Q? Well, now, isn't this just fine. Humans aren't supposed to be in this quadrant for another hundred years.

It was not specifically mentioned in any episode after. He stayed on the Kyrian planet for many years before leaving to follow voyager home. I would like to think the cunning and resourceful hologram made it back; the last voyager crewmember to return home.

There is no canon information of what happened to him. The only thing we know is that he took a ship and headed for what he knows of as home. We don't even know what will be the state of affairs should he manage to get there.

In the end this is another one for the Fanfiction writers ;).

31
What really happened to the USS Voyager in "Living Witness"?

27
In the novels, what happens to the Doctor and the rest of the Voyager crew after they return home?
55
Why doesn't the Doctor duplicate himself when he has multiple medical emergencies at the same time?
26
How fast can impulse drive propel a ship?
21
How was Voyager still in the Delta Quadrant at the end of the series?
27
Has Starfleet ever sent ships on extra-galactic missions?
7
Why haven't the Kyrians and Vaskans had contact with the Federation?
1
How did the Backup EMH make the journey back to the Alpha Quadrant without the mobile emitter?
20
Why did Captain Janeway feel that using the Doctor as an expendable messenger boy was more important than keeping him around to heal the crew?
31
What really happened to the USS Voyager in "Living Witness"?