How is Nekron related to Death of the Endless?

Nekron is "Lord of the Unliving" and the ruler of a dimension where souls go after they die, although this is clarified as "before their final judgment". If Death of the Endless is also present in the DC Comics (or Detective Comics Comics) Universe, how is her/his/its dominion over death (and her/his/its task of shepherding the dead) reconciled with Nekron's powers, existence, dimension and his Black Lantern Corps?

Really, Sandman can be considered 99% distinct from the DC Universe. The characters from Sandman don't interact on any significant level with the 'traditional' DC heroes, and Gaiman's characters just don't show up in DC's books.

Death is an idea, a concept, an irresistible force which came into being the instant the first form of life did. Nekron is nothing. And at the End, Death will "put the chairs on the tables and turn out the lights as [she] leaves." Nekron will have been completely forgotten, irregardless of his powers, his Corps, or his dimension.

In the DC Universe, the two entities Death and Nekron have very little to do with each other beyond both being related to the conceptual idea of death and dying and possibly having an existence that predates the current Universe. Curiously enough, both ARE concerned with Death, but their outlook on the implementation of that outlook is their primary difference.

As far as their relationship? Things die. Death sees to it. They eventually get shepherded to their respective afterlife. Those who find themselves in-between their paradise or punishment in the afterlife, find themselves hosted by Nekron in a purgatory (it is unclear if there is more than one purgatory) until such time as they move on. Purgatory was never meant to be a permanent condition. Though Nekron is the master of this Land, his control of it does not seem to disturb Death of the Endless, so he must be serving a purpose beyond mortal understanding, perhaps without even realizing it.

Death of the Endless

It is unclear whether Death can die. Though she has incredible magical might and some level of omniscience, she is without fear, strangely moral, and despite this remains the most cheerful member of the Endless.

Nekron, Lord of the Unliving

Nekron is more concerned with subverting death, returning the dead to a semblance of life, so he may further his goal of bringing death to the Universe at large, the sooner, the better. No one knows his origin or how he came to become lord of the Land of the Unliving. 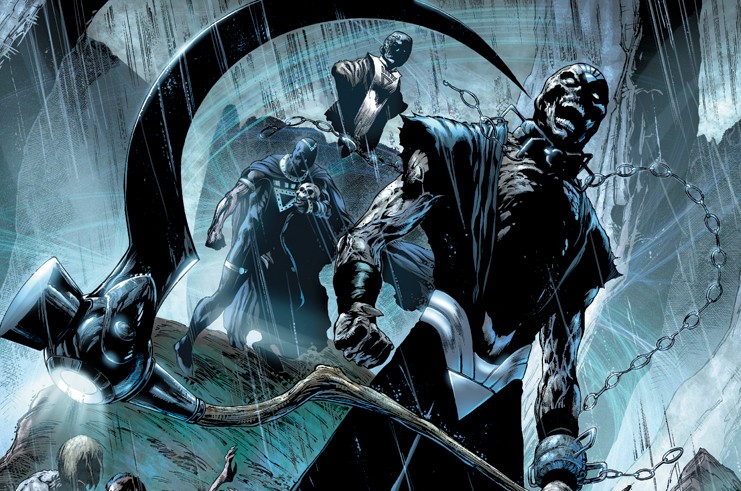 Geoff Johns: All you need to know about Nekron is that he is one of the most powerful dark forces in the universe… if not the most powerful. He is the darkness. He's someone I've wanted to explore for a while. But you'll learn more and more about him as the series goes on. It'll all become clear as you read more… but he's not really a villain. Nekron is existence. --Nekron is the first villain the Guardian attempted to imprison

"...Toward the timeless domain of my most majestic master-- Nekron, Lord of the Unliving. And there in that place that is neither Heaven nor Hell, that place which lies somewhere between eternal peace and eternal punishment as souls beyond numbering stood waiting with infinite patience, my master sensed the coming of Krona and he knew that it was good."

Death of the Endless is THE primal force, idea, embodiment, etc. of death as a whole. She is immortal and omipotent.

Nekron is Lord of the Unliving and is immortal (in a sense) but they never listed him as an omnipotent. He is just really, really, really, really powerful. BUT there has been some hints where he is not only a part of the darkness, but is perhaps THE darkness itself.

With that in mind, both beings are idealistic creations of Death and The Darkness itself. Both exist as manifestations of an idea of something beyond human or universal understanding. Just as death will live on as an incarnation of the universe deminishes, the darkness will continue to live on as well.

HOWEVER, it is also said that Nekron is an embodiment of Death and Lord of the Unliving. With this in mind, Nekron could possibly be a part of Death of the Endless. Little is known about Nekron's origin and that plays a huge part in this conversation.

This is a mistake in conception, largely based on our modern conception of death in general

Nekron and The Entity both are related to "life", but not "life". Let's see if I can explain.

Let's say we have a world where on one side it is black and on the other side it is white. Death would be the ruler of the black side of that world and simply makes sure that people from the white side that should be on the black side are taken there.

Nekron and the Entity on the other hand don't care at all about that and are more interested in only the white side.

The Entity's ability is to animate the unliving by imbueing it with the characteristics of life which we would associate that more with will or spirit or thought... or perhaps the best way to put it, Sentience. Nekron, on the other hand, thrives on and has the ability to control things with no sentience.

If we were to look at this in a more philosophical sense. The way we can break this down is Nekron's doman is "matter" or "body". Death's domain is "spirit", "ki", or "soul". The Entity's domain would be "Mind" or "Sentience".

How they relate to each other though beyond that we can't say, Death may be a tier 1 existence, The Entity a tier 3, and Nekron a tier 6 or any other variation of tiers. We don't know.

Not the answer you're looking for? Browse other questions tagged dc the-sandman or ask your own question.

6
Could Loki have been responsible for the first Despair's death?
12
How did Roderick Burgess capture Dream instead of Death?
8
How will Death of the Endless die?
7
Is Mister Dark part of/Homage to The Endless?
6
What's up with Guy Gardner's Yellow Ring?
1
Are there only one septuplet of Endless that oversee all DC continuities?
7
What is the relationship between Death of the Endless and Daniel Hall like?
9
How are the Vixens related?
11
Did the other Endless know that Dream was held prisoner?
2
Has anyone ever tried to physically attack any of the Endless?