Is there an Upper- and a Lower-earth along with Middle-earth?

I have always wondered are there more types of earths besides Middle. Is there an Upper and Lower?

Until someone comes along with a better answer based explicitly on Tolkien's writing, I will simply suggest the link to the Norse Midgard.

Remember that Tolkien drew a lot of inspiration from Nordic sagas and myths, and Midgard is the Nordic name for the world of men, the one that stands in the middle of Yggdrasil the world tree. There are worlds below it and above it, ones inhabited by gods or giants, but this is the middle one, mainly because it was myths by humans and for humans.

No. Middle-earth is a continent on Arda.

In J. R. R. Tolkien's legendarium, Arda is the name given to the Earth in a period of prehistory, wherein the places mentioned in The Lord of the Rings and related material once existed. It included several seas and oceans, and the continents of Middle-earth, the Dark Lands, and Aman (The Undying Lands), as well as the island of Númenor and other lands, left largely unnamed by Tolkien.

No, but there is a Left and Right Earth.

More specifically, there is an Eastern continent and a Western continent; Middle-earth is the one between the two (i.e in the middle), separated from them by sea on either side. The 1930's Ambarkanta contains a number of world-diagrams, including the following one, illustrating the concept: 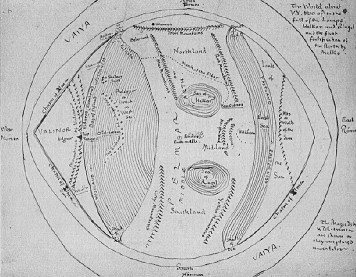 'Middle-earth', by the way, is not a name of a never-never land without relation to the world we live in (like the Mercury of Eddison). It is just a use of Middle English middel-erde (or erthe), altered from Old English Middangeard: the name for the inhabited lands of Men 'between the seas'.

Middle-earth is generally regarded as a continent, if I remember correctly. Besides Middle-earth there is also Aman, where the elves (specifically the Noldor) came from, and Númenor, where Aragorn's ancestors came from.

Middle-earth is a continent within the larger domain of Arda, which is described as "Earth at some point in its prehistory" or something along those lines.

Arda was originally flat, until it was made round after the destruction of Númenor. If memory serves, the continent Middle-earth lay roughly in the center of the primordial, flat Arda (Arda Unmarred), although it is obviously impossible for it to be in the center of the spherical Arda Marred.

The other continents of Arda did not follow this naming scheme (Aman and so on), so no, there is no "East Earth" of "Left Earth" or anything like that.

Yes, all of Arda at creation was "flat".

Middle-earth was Beleriand to (roughly) the Mountains of Shadow. This Middle-earth was the land bathed in the light streaming from The Undying Lands (a.k.a. Aman) across the sea.

Beyond Middle-earth (going East away from Aman) were the lands seeing only the light of the stars at creation.

Middle-earth was the place of embarkation (e.g. the Grey Havens) for the First-born (Elves) - having awoken in the uttermost East under the stars and wandered West, drawn toward the light of Aman.

Númenor was created by the Powers (Valar) as a reward to those Second-born (Humans) who aided in the battle against Melkor/Morgoth. It was an island continent located nearer to Aman than Middle-earth but not in the Blessed Realm proper. Númenor (a.k.a. Atalantia in the Adûnaic language) was later destroyed by the Valar as punishment of the rebellion of the Númenóreans.