What is the Zion Foundation?

In The Matrix Reloaded, during the scene where the Nebuchadnezzar is returning home, there are several seconds of footage of all the impressive machinery which operates the main gate. There is one shot of a set of huge cogs, and on the side of one of them is printed ZION FOUNDATION. Seen below.

With the idea that all of the Matrix Universe is canon (since The Animatrix, the video games and comics were all produced/directed/written/edited by the Wachowskis) has anyone seen anything that would explain what (or who) the Zion Foundation is? I have not, and the only game I haven't played is the MMO; I've read all the comics. Is there more supplemental material?

This detail set photo shows that it's not Zion Foundation, but rather Zion Foundry. Presumably the city has its own ironworks to create large metal objects such as these. 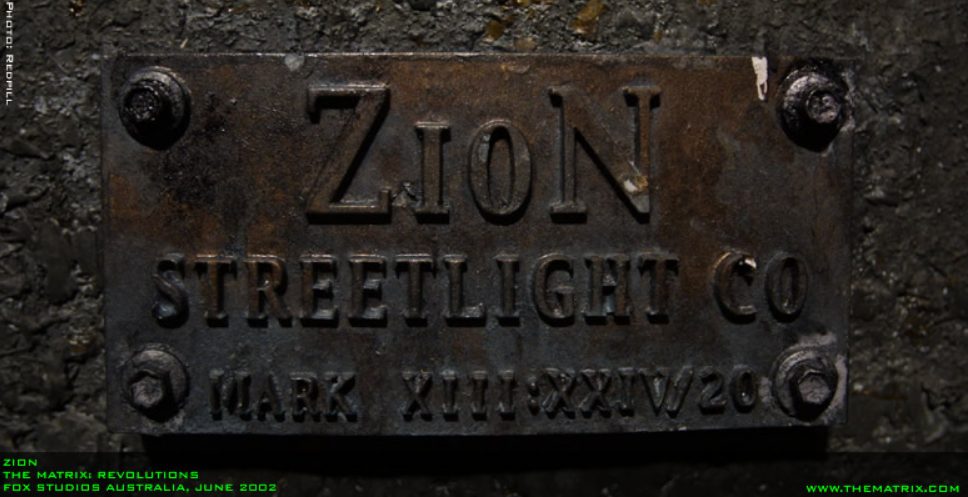 Discussion at the site linked to in Solemnity's comment above settles on it actually saying 'ZION FOUNDRY' not 'ZION FOUNDATION'. If you look just past the 'D', you can see a vertical stroke from the left edge of the next letter, which is more consistent with an 'R' than an 'A'.

It would also be a better answer, in the Occam's Razor sense: the mundane explanation that these large pieces of metal were created in a place whose very name means a place that makes large pieces of metal, rather than a cryptic reference to an otherwise-unknown organization.

12
Is the "Zion Archive" (Animatrix) Machine Propaganda?
67
What was the purpose of having Zion?
15
Did the Agents know about the history of the Matrix and/or previous Ones?
1
Can hoverships transmit messages to Zion from broadcast level?
4
How many hoverships did Zion have?
16
Is there good canon evidence for the "Nightmare Matrix"?
9
Can I choose my own name in Zion?
3
How many times do we see things entirely in code within the Matrix?
6
Were the machines actually using humans as batteries, or was that all a lie?