How many crewmen/women die in the original series of Star Trek?

I've decided to watch the original Star Trek series from the beginning starting with "The Man Trap" (I know there were pilot episodes before that). In that episode alone 4 crewmen get "de-salted" which is a hefty loss of personnel in one go so I wondered what was the series total of fatalities amongst the crew.

Memory Alpha's list of TOS fatalities (complete with pictures) among the Enterprise crew only is as follows: 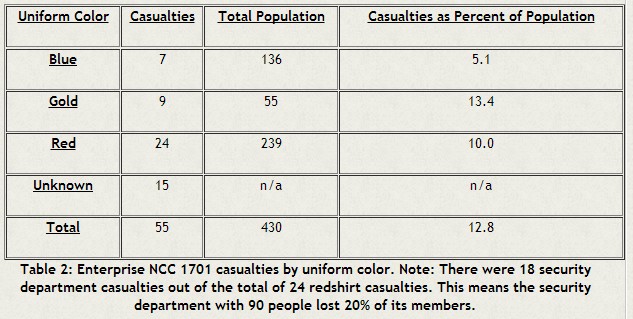 Enterprise NCC 1701 casualties from episodes aired between September 8, 1966 and June 03, 1969 based on casualty figures from Memory Alpha. Note: Table does not contain casualties from the Mirror Universe or anybody killed and resurrected during an episode.

A very interesting analysis done by mathematician, Matthew Barsalou, points out it was not the color of the shirt per se which caused the deaths of the crew (as the running joke about red shirts and expendability imply) but the occupation which made the red shirt appear to be as dangerous as it did onscreen.

His math points out it was the occupation of security for the ship which made wearing a red shirt so dangerous, as over 20% of the security detail died during the run of the show. You can enjoy the calculations and how he arrives at them in his article in Significance Magazine (a magazine about statistical analysis)

Using what is known about Enterprise crew and casualty figures, suppose an Enterprise crew member has been killed. Discarding the 15 unknown casualties, redshirts consist of 60.0% of all fatalities where the uniform color is known; blue and gold uniforms are the remaining 40.0% of casualties. Redshirts are only 52.0% of the entire crew, but 60.0% of casualties, so what is the probability that the latest casualty was wearing a redshirt? The Enterprise often visits Starbases and takes on new crew members, so we assume sampling with replacement. Otherwise, the population size would change every time a crew member is killed... There is a 61.9% chance that any given casualty is wearing a redshirt.

When searching for Spock (or anything else Star Trek related), Memory Alpha is the definitive source to reference.

According to Memory Alpha, number of 23rd century Starfleet casualties is is 57:

In the novelization of Star Trek: The Motion Picture, written by Gene Roddenberry, Admiral Kirk states in his forward that during his five years in command of Enterprise, a total of 96 of his crew perished. No persons were killed in The Animated Series that depicted the remainder of the five-year mission, making the on-screen Enterprise death toll stand at fifty-seven (not counting revivals, and including the deaths of Leslie and Galloway).

This matches closely to the Redshirt wikipedia article listing 59.

Per the article, analysis of the original Star Trek episodes shows that 59 Enterprise crew members were directly killed in the series (I assume that means onscreen and/or referenced on-screen). Not surprisingly (hence the source of the article name) 43 of those or about 73% were wearing red shirts.

-1
Why is Kirk dressed in Gold?

24
What were the *other* two original Star Trek pilot stories submitted to NBC?
70
What is the recommended viewing order for young first-timers to watch Star Trek TV episodes and movies?
5
Are non-humonoids independently evolved (without seeding)
0
How can Professor Crater recognize the M-113 creature
20
Was the font used in the Star Trek wordmark created for the show, or was it a re-purposed font?
13
When did the writers of Star Trek decide the Federation doesn't use money?
2
How many Voyager crewmen die?
51
Why does it say on Netflix that "Star Trek: Discovery" is a Netflix original series?
3
Were any other lengths of time given for the period between the present and The Original Series?