Kid gets sucked into a video game or TV show

I read a book as a kid (in the late 80's-early 90's) that was about a kid getting sucked into a video game or TV show and he had to make his way through the world and defeat the bad guy. I was thinking it was a short one word book that started with a Z or Q. It is not the Space Demons series book. It has been 20 years.

The cover, I believe, was the main character walking a path, very science fiction looking, and heading towards a castle or mountain or fortress.

I always thought it was something like Zorg but I have looked up that name or anything close and haven't found it.

Zorg? Could it have been The Battle of Zorn by Lurlene McDaniel? 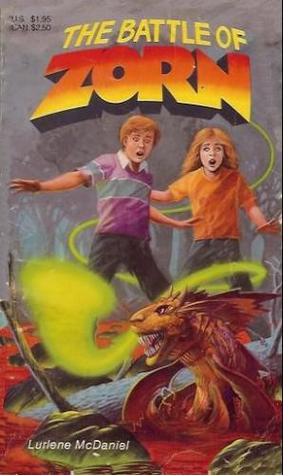 A review from GoodReads:

I can't remember much about this title except that it is about a kid who plays a video game and gets transported into the video game world and has to fight the wars going on therein... I lost this book a very long time ago, but it was the best book I ever picked up from a visit from Scholastic Book Fair

Possibly Terry Pratchett's Only You Can Save Mankind from 1992. It doesn't have a one-word title though, obviously.

Alan Dean Foster did a novelization of the film The Last Starfighter, which has a vaguely similar theme, in 1984.

A couple of possibilities that I've found:

Demons Don't Dream by Piers Anthony: part of the Xanth series and published in 1993. According to the Xanth Wiki:

The Glitch by Ronald Kidd - published in 1985 and described on Amazon as:

Eleven-year-old Benjamin Bean dislikes modern machinery, particularly computers, and is dismayed to find a new microcomputer in his favorite second-hand bookstore. There's a "bug" in the store's computer program, however, and when Benjamin casually picks up a loose electrical cable, he is sucked into the machine. Inside is a chaotic world full of regimented people and living data-animated numbers, letters and punctuation marks, etc. With the aid of the letter "M" and Professor Babbage (inventor of the mechanical digital computer), Benjamin travels through the kingdom, surviving encounters with a dragon and the police, until he finds the true bug in the system and returns home.

Okay, a couple more possibilities, though both are long shots:

The first is Finders Keepers, which fits the time frame. Summary:

Patrick seems to be in luck when he's invited to be on a television game show, "Finders Keepers." The only problem is that there's no such channel where he lives and there's no such game show. But when the boy tunes in on Saturday morning, he's pulled through the television into a parallel universe. There, he must decode the riddles of three "seekers" whose possessions have been lost through the barrier between the worlds. Patrick must go back to his world and return with the lost objects in order to win fabulous prizes (including the computer for which he yearns).

Another possibility is Keeper of the Kingdom. It doesn't fit the time frame, really, but it does have a bad guy (Zaul) who needs to be defeated. Summary:

Like most thirteen-year-olds, Matt loved computer games. He'd just gotten a new game, KEEPER OF THE KINGDOM, and had only begun to play the game. Suddenly, his computer locked up, and pulled him into the game. He found he was no longer on Earth in the year 2010 A.D., but on a very different Earth in the year 2540 A.D. Matt finds himself in the kingdom of Zaul, where humans are worker slaves, making the chemical Xeleron for the Cybergon Protectors, robot soldiers, to use in their Xeleray weapons. This explosive is made in unventilated laboratories, and is killing the workers who make it. But if they do well, they may become gardeners, and work outside in the fresh air. There they grow and harvest Zaul's food supply. The Protectors are commanded by a few greedy humans, who serve the growing appetites of the Keeper, an old man with a long beard. Matt finds himself running from the Protectors and hiding among the workers, while he figures out a way to free the workers and get back home. Can the workers keep him hidden long enough to find the Liberators and destroy the Keeper?

Could it be Space Demons and Skymaze, both by Gillian Rubenstien? Apparently, there have been several different covers, but I remember a castle being involved in part of the book, so it may have been on the cover of your edition... http://en.wikipedia.org/wiki/Space_Demons

This sounds like a game I used to play called kid chameleon. There was a comic based on this too. I believe the kid got sucked into computer after the 'bad guy' kidnapped his girlfriend.

It doesn't fit EXACTLY, but it certainly fits some elements. Included link is to the article about the old-school NES game Blaster Master. Scholastic books made a novelization of it in their Worlds of Power series. (They're actually surprisingly good books, considering how they're novelizations of old NES era games). Boy loses pet frog down a hole, goes after him, finds himself essentially in the game Blaster Master, with a kick-ass tank and some sort of female sidekick. He has to progress through various levels, becoming stronger, getting energy for the tank, to eventually unlock abilities, and defeat the final boss. I recommend!

There is a series of choose your own adventure books titled Zork. I believe they are based off of the classic text computer RPG. I googled it but didnt see one off the bat that exactly matched your description but it seems to in other ways.

As far as books go-Castlevania 2: Simon's Quest written by F.X. Nine was about a kid Timothy Bradley who get's taken to Castlevania by Simon Belmont to help him vanquish Dracula.

My other suggestion/guess-is Captain N' The game master. Series ran in the late eighties/early nineties, and was about a teenager and his dog getting sucked into video game land-where each episode is placed in 1 game or another.

I know it's been 4 years, but I think maybe the book is User Unfriendly by Vivian Vande Velde. Her other, very similar book Heir Apparent is one of my all-time favorites. Hope you eventually figured out the book!

Edit: looks like it was the Battle of Zorn, but oh well haha

Space Demons: by Australian author Gillian Rubinstein. First released in 1985... I believe this to be one of my fondest childhood book memories of the 1980's and I remembering feeling like I too was transported into the world of Space Demons....

The main four characters in the book are Andrew Hayford, Ben Challis, Elaine Taylor and Mario Ferrone. The plot starts when Andrew's dad brings him an exciting prototype video game from Japan. Andrew, who is a video game enthusiast, shows it to his best friend Ben Challis, who agrees to play the game with him. Later, two other players are introduced to the game: Mario Ferrone and Elaine Taylor. It is later revealed that it is possible to get transported into the game by means of a special gun, which only works when a strong beam of hate is directed at someone. Later on, the four get trapped inside the game and gradually work out the only way to escape and thus win the game is if they conquer their hate

I believe what you are looking for is called Tron. There were book adaptations.

The are you afraid of the dark series had an episode about a kid stuck in a pinball machine. The story is written here: https://areyouafraidofthedark.fandom.com/wiki/The_Tale_of_the_Pinball_Wizard

Captain N: The GamMaster It came out in 1989 A series about a kid and his dag who got sucked into a Nintendo 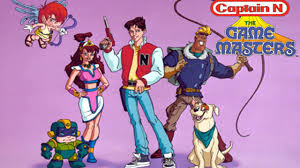 I think the show you are looking for is Zixx : Level One on YTV

Zixx and Flanngo need to find a way into the Keep, a trans-dimensional antimatter field (a cyber dimension resembling a video game), the last legacy of the ancient Gaanth race, the leaders of the Network (reminiscent of Tron). The difference is that it is game over for real if you die in the Keep. Reluctantly accepting the help of earthlings, Adam and Griff, the four need to move fast and finish level one of the Keep, to do so they will need to recover the six fragments of a crystal that are scattered throughout the level. When the crystal is whole and combined with the crystal base, it shows the map to the three neuropods buried deep within the level that, when solved, show the path to the next level. They must accomplish all of this before Onccalon's henchman Deeth does.

9
Book Ident.? About kids getting sucked into video game
13
Late 1980s-1990s book about a kid trapped in a video game found on his front porch
4
Monster in a house which absorbs people and then looks like them
5
Mecha-Anime with a kid who gets sucked into a video game
6
Movie played on Sci-Fi about people with blue or green blood
17
80s (?) short film about video tape that can wrap you up and is nefarious
3
YA/childrens book I read in the mid-late 90s, about videogames & crocodiles?