What is the origin of the name "Obi-Wan Kenobi"?

I'm a big fan of flying, and I noticed a possible similarity between some flight control terminology and the name "Obi-Wan Kenobi", and I'm interested in finding out if this is coincidental, or if there is a deliberate link.

Every airplane has two devices used as a short-range radio navigation system, enabling the aircraft to determine it's position and stay on course by receiving radio signals. These devices are named "Omni-Bearing Indicator", also known as "VOR" (VHF Omnidirectional Range), and you select the frequencies by turning a knob in each unit. Select the "origin" frequency in the first unit, and the "destination" frequency in the second unit. When in flight, these devices make sure your aircraft is on the right course from "origin" to "destination".

Are there any sources as to the origin of Obi-Wan Kenobi's name that might support or debunk this theory?

George Lucas has an incredible mind for dreaming things up, but names are not his strong suit.

The worst, of course, being Darth Vader, which literally translates to Dark Father. Take a look at this list of name translations/meanings (note that some of them, like wookiee, are wrong).

For Ben/Obi-Wan Kenobi, the writer details:

(Ben) Obi-Wan Kenobi = Ben is Hebrew for "Son"; Obi is an African name which means "heart"; obi is the karate or kimono belt; Okwu Nkasi Obi, means words of comfort; Obi means "soul" in Swahili; obi is a religious belief of African origin involving witchcraft; Wan is an Old English word which means "dark." also "unnaturally pale from grief"; Wan means thin (Anglo-Saxon: wan = wane); Japanese: Wan means ten thousand, myriad or a great number or a scorpion; a form of the word win; Ken means knowledge of, to understand, to recognize; Ken is a house which is a resort for thieves; ken is to look around; ken is also a flaming user. This was originated by a software support group because the two greatest flamers in the user community were both named Ken; A theory: Kenobi was a clone line's template, so Obi-Wan derives from "OB-1";

Yes, this page has some incorrect information and some theories, but it also has a lot of correct information regarding names and translations. Does this mean that your theory of "Omni-Bearing Indicator 1 knob" is debunked or verified? No, but the fact that many of the names can be traced back to literal translations casts serious doubts upon it.

It's no secret that much of the early lightsaber choreography was a mixture of Japanese Kendo and western fencing. That and the Jedi have quite a few parallels with the Samurai.

In Japanese, wan means "woof", as in dog goes woof. So it literally means Belt Woof Swordbelt. Probably not only meant to be Japanese, although I read recently that Lucas originally wanted Toshiro Mifune to play obi wan, so the Japanese would fit his casting.

Both parked on the lot George Lucas was working on when he scripted Star Wars. 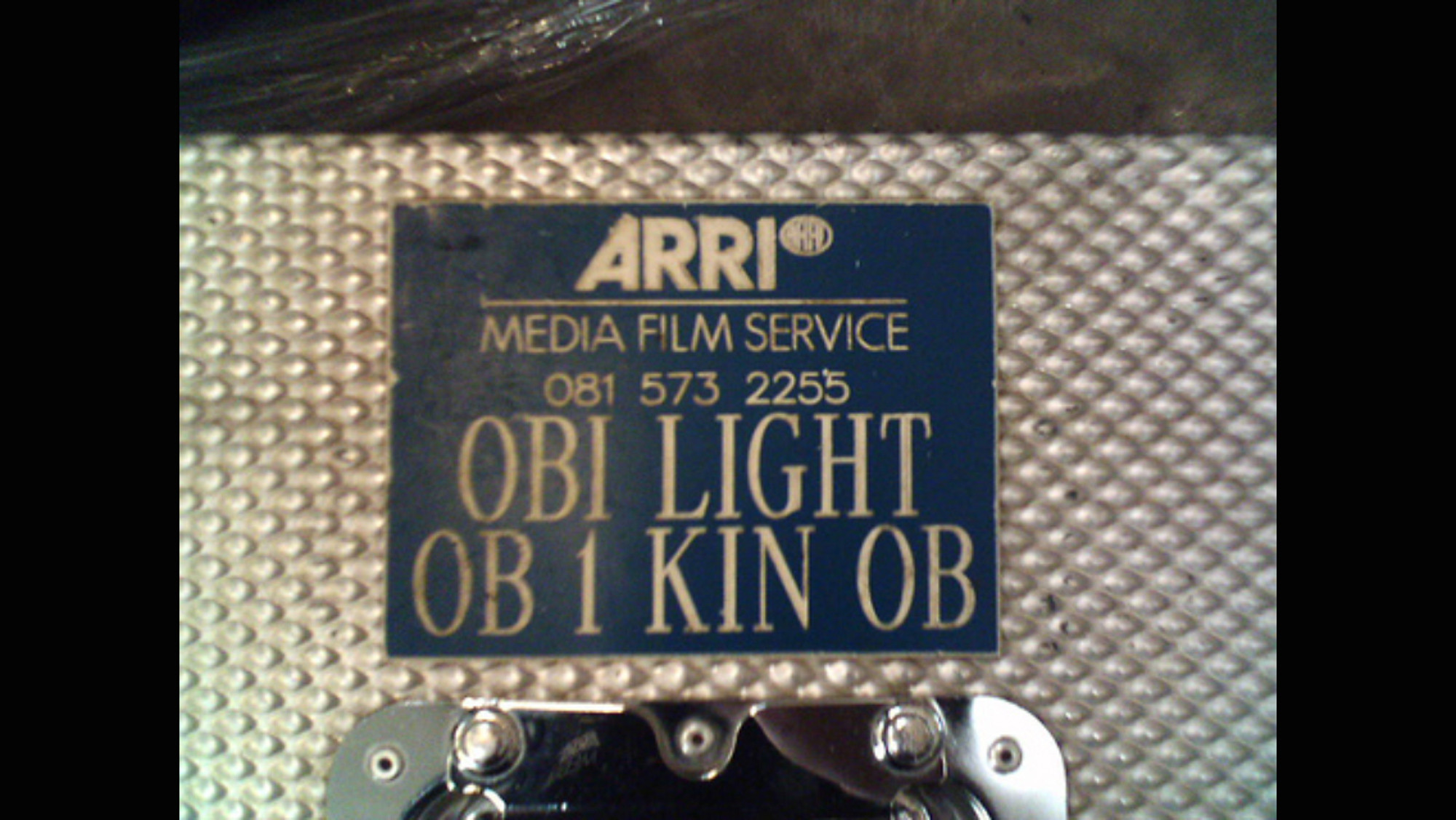 Trying to make the name match flying terminology is a real stretch. The above postings about Obi are closer. "Obi" is a variant of the word obeah which refers to a form of African sorcery. So "Obi" makes sense; pair it with "Wan", which apparently means dark and/or unnaturally thin, and its a fit for one who dabbles in the dark arts. The meaning of "Ken" also fits, and putting another "Obi" on the end of "Ken" makes a nice sound and, more importantly, under-scores the original meaning of the name. So George Lucas's writers may not have just been creating a nonsense name that sounded good. It has a basis in culture.

Disclaimer: all of this is just my own speculation, based in linguistic analysis and without any kind of support or reference from Star Wars Canon, and it is pretty likely only an interesting coincidence.

The word Kenobi sounds really much like cenobite, making me think that even if this was not a conscious reference, it is at the very least very fitting.

Cenobite of course is a synonymous of Monk, and to be precise, the kind of monk that lives a communal life together with other monks in a convent, opposed to one that instead chooses a life of isolation, which instead is called Hermit.

The etymology of the English cenobite comes from Latin coenobita1, meaning monk, cloister-brother, in turn derived from Greek koinobios, a word composed by koinos (common) and bios (life). The Greek koinobios in particular has a sound that resembles very much the word Kenobi.

This is perfectly fitting with him belonging to the Jedi Order, being itself a monastic order, even if a militaristic one (besides the obvious Samurai inspirations, even western Knight Orders like the Templars, the Hospitaliers and other born during the Crusades were monastic in their nature); it is worth noting that many values and tenets (the most obvious being maybe the celibacy) are common to the fictional Jedi and to many of the real-world monastic orders.

It is rather ironical than in his later years Obi-Wan lived as an hermit, basically switching to the other style of monastic life.

Of course all this analysis is from an out-of-universe point of view, and should be considered only a speculation on the possible sources (both conscious or unconscious), since, strictly speaking, in-universe neither Latin nor Greek could be considered valid etymological sources.

1. Please note that while in English "C" is often spelled like "S", in Latin (and neo-latin languages like Italian as well) it is spelled "K" (or in some cases with a sound similar to "CH"), so in example, "Caesar" must be pronounced "Kaesar" and not "Sisar", and in this case, while "cenobite" is spelled "senobait", the latin "coenobita" sounds like "coe-no-bee-ta" (while the Italian "cenobita" is more like "che-no-bee-ta"). You can listen it by using Google Translate.

Obi means heart in African, and Wan is as above stated to be a word for "dark" yet if used in terms of wax and wane, it is the loss of or the diminishing, which ties into the plot as Obi-Wan is seen to lose all he has come to love and know, his major importance to Luke, and his early death in the movie series indicates his name can be connected to this translation as he is diminished in heart after he leaves Anakin, sees Padme die, and is left in charge of his near brother's only children, making him a man with a darkened heart or a diminished heart, as love lost by definition is the diminishing of the heart.

Only after he is called upon by Luke, does he present himself as Old-Ben, yet asks Luke still to call him just "Ben", being "son" in Hebrew, which can be linked to Obi-Wan and his old master as a man who loses his father figure, he is the anti-Vader to the story, and goes through all that Anakin does. He even goes as far as being called Ben until he dies, afterwards in the following movie he calls Ben by "Obi-Wan" again, and Yoda also refers to him as Obi-Wan.

Yet after he returns as a force ghost, Luke calls him Ben again, almost as if to state his status and character in the story. Ben being the "old son" is kind and happy, while Obi-Wan is colder, and more diminished in heart, making that cold manner seem more permanent. I believe the name Obi-Wan was chosen directly for its meaning, for Obi-Wan is actually a main focus in these stories, Luke being a carbon copy of both Obi-Wan and Anakin combined, represents the later battle of good versus evil that had started between his father Anakin and his true godfather Obi-Wan, represents righteous good, while his father represents absolute evil, and Luke himself represents the union and pacification of both good and evil into life.

In truth, I believe most of the writing began around Obi-Wan, Anakin being a mere after thought could have been any support character, as Obi-Wan had predating history prior to his debut in Episode 4. Ken or Kenne comes from German, and means to know, or be acquainted with, so Kenobi or Kenne obi means "to know heart", so put it all together, and Obi-Wan Kenobi means: "to lose ones heart to know ones heart" and yeah its not an exact translation, but you never will get one, all languages are subject to slang, err, misinterpretation, or falsification, meaning 1000 years from now all we say might be jibberish as all language on the Earth will have intermingled and mixed whilest many others will die off, so that being said, I'd like to believe this is the true meaning of the name Obi-Wan Kenobi, as to its origin, well, go ask George Lucas.