In the early 90's, when I was a child, I regularly saw a live-action (not animated) TV show with children that did something good (solve problems or chase away bad guys, I'm not sure). It was on Dutch television, but I think the show was not originally Dutch.

The thing I was most impressed with and remember most vividly is their computer. They had a big talking computer screen that could show all kinds of stuff in green-on-black on it. I also remember a lens of some sort mounted somewhere around the screen that would be the computer's eye. The computer had a slot into which data sticks could be inserted.

I think the computer may have been in a barn, but that sounds silly and I'm not sure.

None of my search attempts have yielded any results. Does anyone know the name of this show?

The name may have included Mission, but I keep thinking about Mission Impossible, and that's obviously not the show I meant.

The show you're thinking of is Mission Top Secret. An Australian kids spy show, I remember it, and the books very well.

This Australian TV series is about an organization known as the Centauri Network, it is a network of children from around the planet who fight crime, & solve mysteries with the help of gadgets, which were quite advanced for the time.

Well, I don't remember a Data slot, and it's VERY old (from my childhood, and I'm 41), but what you are describing has a lot in common with 'Read All About It!'. Otto & Theta (intelligent computers; Theta is the talking monitor, Otto is a printer), it takes place in a Coach House, the kids do various good things, etc. And it was on PBS.

Does this look at all familiar: 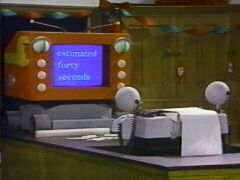 If so, take a look here; that may confirm it with more info and images.

This is a bit of a stretch, timewise, but since it was originally in English, it may have shown on Dutch Television years later.

Could it be the 90s version of The Tomorrow People?

Is this what you mean? Children of the Dog Star.

I believe it’s Crash Zone. I remember watching it on Saturday Disney early 90s. Back when shelley was hosting

8
Sci-fi type of show where a guy traveled in search of his wife and helped solve paranormal cases along the way
12
Children's book about a boy making a deal with a demonic piece of software
6
Children's science fiction book series and tv show
6
Children's science fiction series on UK TV in the 70s featuring hatred of technology
16
Identify science fiction novel about ancient machines destroying all sentient planets
5
TV show about teens with "magic armor" fighting a villainess
3
Show where 2 kids interact with a programmer stuck in his computer
10
Early to mid 80s, children's sci-fi (quiz?) show; live audience, shouty host called 'Captain...' something or other