Canonically, Cyclops's optic blast causes a concussive blast while there is no noticeable opposed force on his face as some sort of recoil. Does this mean that he could use his optic blasts as some form of propulsion? 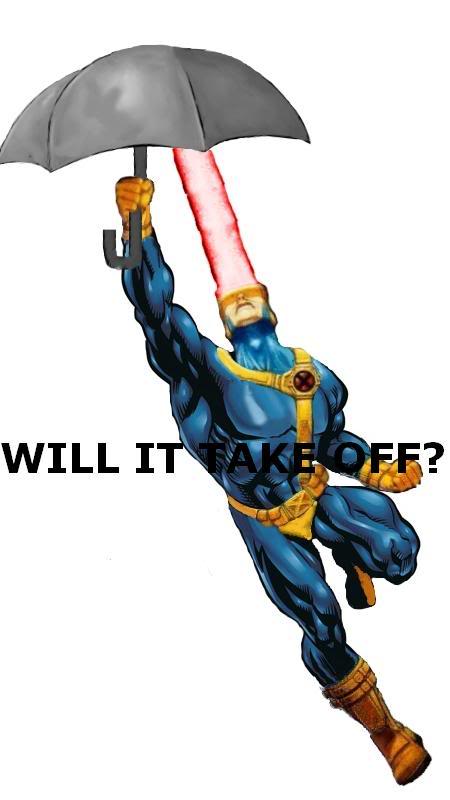 Cyclop's eyes (in later canon) are actually interdimensional portals, gateways to a dimension full of this strange concussive energy. When his eyes are open this energy will continuously spill out if not blocked by a special quartz lens as in his visor or his sunglasses, which will nullify it, same thing with his body like hands and eyelids. Since the force does not actually originate from his head, Cyclops doesn't feel any recoil and can use his beams to apply as much force as he can muster on any object without affecting himself. It's thus entirely possible for him to apply a force to an object that he holds and fly away with it.

I don't know that I would call it true flight, but in the classic X-Men issue #53 (1969), Cyclops propels himself into the air for short distances by aiming his optic blasts at the ground.

In the ultimate universe, yes and no. While his powers in the ultimate universe are the same optic blasts, the source, on the other hand, is the same as his brother Havok's. This means that he has no portals where his infinite powers come from. But rather they are from absorbing ambient energy from his environments such as sunlight and electricity and store it within his cells, metabolizing the power and shoot it through a dimensional aperture through his eyes to unleash them as heat-less blasts of concussive force. In other words, 1610 Cyclops is the same as mainstream Cyclops before his powers got retconned.

With that said where does his ability to flying comes from. In 1610 aka the ultimate universe there's a drug called Banshee used by the members of Alpha Flight and even utilized by a certain number of X-Men such as Colossus and Rouge who require its effect for their own advantages. For Colossus, this helps him with his mobility while utilizing his organic steel form and as for Rouge, she does not require to absorb other mutant powers along with their life-force via skin contact, but rather stay in the vicinity. In this mutant group, Cyclops himself would join in their hunt against Alpha Flight. This would lead the man to use the drug-like everyone else.

After taking this drug, Scott gained the ability to shoot force beams from any part of his body and control them. To make things even better, his strength, speed, stamina, durability, and sense would also enhance allowing him to be more powerful. Additionally, he would not only display the ability to fly, but he could also survive and travel in the vacuum of space without any problems.

These enhancements, however, are a temporary boost and it allows the users to display what they are truly capable of at the height of their potential. Apart from this drug, there is another one that exists. The drug called Mothervine in the ultimate universe is responsible for creating the known mutants. Unlike the Banshee enhancer, this drug alters the DNA of both men and mutants. While in the 1610 universe it is shown to have the power to alter the motor neurons and genetic makeup of a person, thus turning them into mutants. Once it appeared in the mainstream 616 universes, its effects include the forced awakening of secondary and tertiary mutations, empowering depowered mutants, and awakening new mutants as well. This drug, however, has harmful and destructive side effects.

As readers, we all know that both Emma Frost and Havok are part of the cabal that was intending on unleashing the Mothervine virus. But, we do not know if the dead body of Cyclops was injected with it in the first place. To further solidify this point, after the supposed/momentary resurrection of Cyclops at the hands of Phoenix in hopes of convincing the older Jean Grey to not return to the living world, we saw a Scott with no effects of the Terrigen Mists in his body; and after his true resurrection, his blasts return to the regular optic blasts as well.

This means that the phoenix had not only purged Cyclops of Terrigenesis but also of many things such as the nanites that broke his powers and the harmful effects on his body and powers from the previous exposure. Thus it can be concluded, that his corpse may have been exposed or injected with the Mothervine strain, which may give him the ability to fly.

9
What do we know about Cyclops' eye dimension?

7
How does Cyclops see?
20
How can Cyclops miss with his optic blast?
20
How did Cyclops originally control his optic blasts?
19
Can Cyclops' eye-blasts hurt him?
3
How come Mimic needs glasses like Cyclops?
2
Why doesn't Cyclops blast Wolverine?
7
How can Cyclops' optic blasts burn or melt objects?
14
How does Cyclops sleep?
27
How does Rogue from the X-Men fly?
13
Did Thanos use the full power of the Power Stone to punch Captain Marvel in "Avengers: Endgame"?