Does Flash age slower because of his ability to run at relativistic speed?

Due to Time dilation, time is perceived differently at greater speed.

Time dilation is an actual difference of elapsed time between two events as measured by observers either moving relative to each other or differently situated from gravitational masses.

Time dilation explains why two working clocks will report different times after different accelerations. For example, ISS astronauts return from missions having aged slightly less than they would have been if they had remained on Earth.

And, we know the Flash can run even faster than light.

Is the effect on his aging ever mentioned anywhere?

Consider, however, that The Flash mostly runs around on Earth. The earth's circumference is about 40,000 kilometers. Even if the Flash runs at only 13% of light speed, he can go around the entire earth in one second. As I understand it, he spends 99% of his time in "normal speed", only gearing up for full speed when necessary. This means that to achieve a sizeable time dilation will take decades, probably. Maybe more.

(Disclaimer: I did not really run any numbers here, neither for time dilation or for aggregated time spent in near light speed. I'm going mostly by intuition here)

No, the Flash does not get any significant aging benefit because he is running at faster than light speeds. There are several limitations which need to be taken into account: 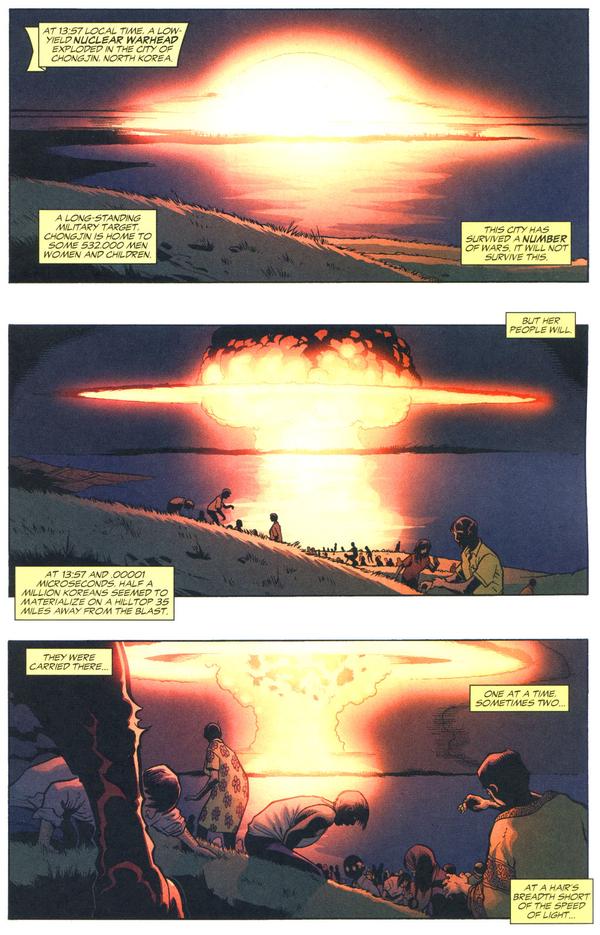 The Flash empties an entire city in North Korea (2 people at a time in a few seconds).

For arguments sake, I would like to think that any time he does gain from the small amount of time dilation he might experience (as stated in more depth in the other answers) is lost due to his accelerated metabolism. It seems he uses a lot more energy and puts a lot more stress on his body when at full speed, so it would seem the two would likely cancel each other out.

My theory is (now it's not necessarily the case, but just a thought) if his body is being sped up meaning like in S1 of the CW's flash when Felicity asks if his newly gotten powers make him age faster which Dr. Wells doesn't answer but instead says "everything we're doing here is for Barry's own good". But to the point, if his speed powers were making him age faster, his accelerated healing should theoretically cancel it out.

Not the answer you're looking for? Browse other questions tagged dc the-flash relativity or ask your own question.

42
How does the Flash perceive time?
57
Why isn't The Flash unstoppable?
28
Can the Flash run faster than light?
17
What is Iron Man's flight range and max air speed?
20
Can the Flash see the future now?

16
Does Superman's Super Speed Affect His Thinking?
20
How does the Flash breathe while utilizing his super speed?
6
Can the Flash use his powers and super speed without the Speed Force (e.g. outside the DC universe)?
5
If Reverse-Flash lost the speed force, and his speed only comes back sometimes, why is he always faster than Barry?
3
Does The Flash age?
3
The Flash S02E20 : What does 'Barry Allen is trapped in speed force' means?
97
Has an injured Flash ever used super-speed to walk on his hands?