Why does Spider-Man shoot webs from his wrist in the movies?

From what I remember, in the original comics, Spider-Man shot webs from his wrist because Peter Parker used his science background to design mechanical web shooters.

In the Sam Raimi movies, however, the webslinging is a side effect of the genetically-modified spider bite that gives him the rest of his powers.

My question is this: why would the spider DNA result in webs originating from his wrists? Natural spiders create webs with spinnerets located at the tip of their abdomen. Wouldn't it have been more believable if Spider-Man's webs came from, well, behind him?

Is there some explanation given as to why his web-producing organs appeared in his wrists, and not elsewhere?

Out-of-universe, they would have had to complicate an already long-running movie to add in an explanation of Peter's father's inventions, how Peter finally solved the adhesive problem, his testing of the fluid, etc. It would have taken another 30-45 minutes to give any satisfactory explanation, which would have pushed the running time up to a fiscally inadvisable level.

The spinnerets become located in his wrists for no good reason. The only reason they're there is because that's where Spiderman's webs come from. Anything even approaching an accurate physical location would have taken the movie into an entirely different direction.

The studio would never have gotten behind that. It would have been a waste of their assets to even consider it.

Actually, scientifically and biologically it's fine for him to have spinnerets in his wrists. Research earlier this year has confirmed several species of tarantula (and therefore likely other spider species) really DO produce silk from their limbs as well as their abdomens; it's part of what helps them climb surfaces.

They wanted to keep the classic Spider-man look with his middle and ring fingers touching his palms while spinning webs, which is why they come from his wrists.

On the DVD behind the scenes they talk about the change from the web-slinging technology to the organic spinnerets. Stan Lee said that if he had thought of the spinnerets originally he would have used that, but since he didn't he had to come up with a technological explanation.

There IS a reason Spider-Man shot organic webbing from the top of his wrists. But to know how this came about, you need a bit of Spider-Man lore that is overlooked in the movie. This was the costume that changed where webbing came from in Spider-Man lore nearly thirty years ago. 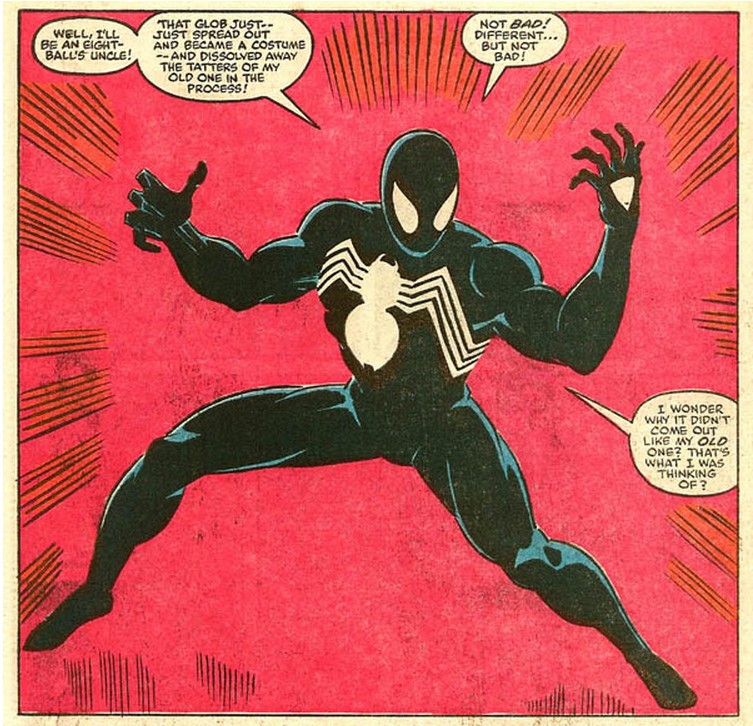 The Famed (or infamous) Black Costume, first seen in the Secret Wars (1984) 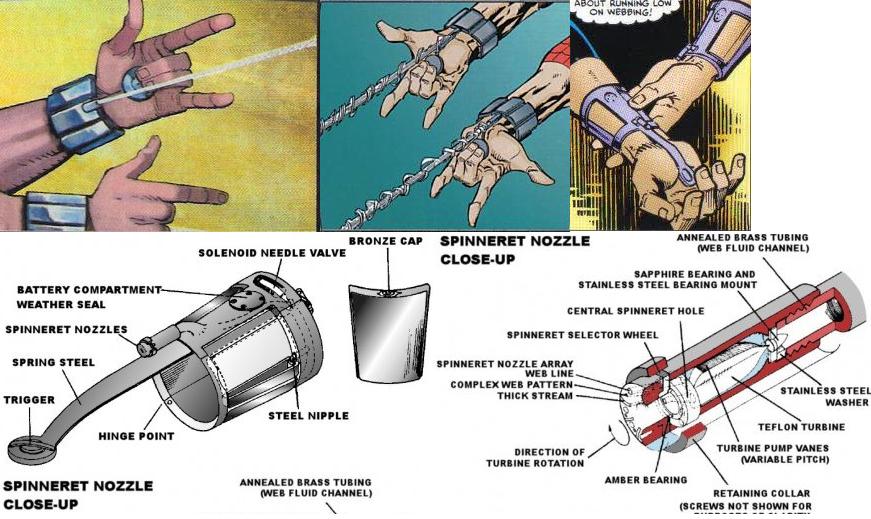 Then came 1984 and Marvel created a character called the Beyonder and the Secret Wars were born. One of Marvel's largest crossover events at the time (possibly one of the earliest) and it brought a wide array of Marvel's most well-known and well-loved characters together in a cosmic struggle including one Peter Parker.

The famed Black Costume was discovered during the Secret Wars run of stories and was an alien symbiote which bonded with Parker giving him a number of new abilities.

So now you know, true believer.

Not the answer you're looking for? Browse other questions tagged spider-man powers super-hero marvel spider-man-2002 or ask your own question.

16
Why doesn't The Amazing Spider-Man have eight limbs and a spider's face?
7
Does Spider-Man use secreted web or web cartridges?
13
Why does Venom's webbing come from above his wrists?
10
What are the different ways that Spider-Man makes webs in the comics?
11
Is there an in-universe explanation why nobody traced Spider-Man via his purchase of Oscorp Biocable?
-1
Are the organs with which Spider-Man secretes organic webbing ever shown?

11
Does Spider-Man shoot spider silk?
11
Is there an in-universe explanation why nobody traced Spider-Man via his purchase of Oscorp Biocable?
10
What are the different ways that Spider-Man makes webs in the comics?
8
Has Spider-Man ever run out of webs?
2
How strong is Spider-man's webbing?
16
How does Spider-Man manage to hold on to his webs?
10
Does Spider-Man’s webbing dissolve in Raimi’s Spider-Man trilogy?
10
Why did Miles Morales get non-spider-like powers (bio-electrokinesis and invisibility) that are vastly different from the other spider people?
1
What is the formula for Spider-Man's base web fluid?