How do the wand makers get the cores into the wands?

One of the sellers of magic wands, Ollivander, sells wands with Dragon heartstring, Phoenix feather, or Unicorn hair cores in them. What does JKR say about how the wandmakers get the core materials into the wands?

As far as I know there is no canon reference to how the wandmakers get the core into the actual wood of the wand; J.K. Rowling doesn't address this through Pottermore either.

However, I noticed that Ollivander (in the Pottermore links above) references his father 'wrestling' to get the core material into the wand, which would perhaps suggest that the process is difficult. Just as a Harry Potter fan, I would imagine that getting a wand core into a wand is exceedingly difficult and, yes, is a magical process. Too bad it's not detailed further.

The second thing I noticed was under unicorn hair. JKR says that the unicorn hair core is most prone to melancholy (meaning it will mope and die if not attended to on occasion) and must be replaced, so clearly there must be a way, by magic and the wandmaker's skill, to remove a wand core and somehow get a second, new wand core into the wand itself. How this happens, though, at this time is unclear. 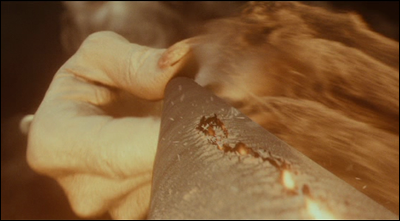 Here's a picture from Harry Potter and the Deathly Hallows Part One that shows Voldemort holding Lucius Malfoy's wand as it breaks apart. I don't think the movies are considered primary canon by everyone, but this scene is pretty much the same in the book as it is in the movie. The point is that wand woods are not impervious and they can be breached.

I always assumed they were made like lead pencils

Today, most wooden pencils are mass produced from large blocks of cedar cut into slats. A machine cuts eight grooves, half as deep as the graphite-clay rod is thick, into the slats, and then places rods in each groove. Once the rods are in place, a second grooved slat is glued on top of the first. When the glue dries, the slats are fed through a cutting machine that cuts the wood into various shapes and divides the slats into eight separate pencils. The seams where the two slats are joined are sanded down and several coats of paint are applied to the pencil, giving it the appearance of a solid structure.

To make a wand they could just substitute the graphite for whatever material they wanted to use for the core.

The same way as a muggle: with specialized tools.

One would need to drill carefully in the end of the wand, hollowing it out. Then the "core" would be inserted. Finally, a small cap of wood putty would cover the hole, be sanded down, and then the handle fashioned to hide this.

I had always assumed from the books that wands were twigs or small branches taken from specific trees. Even some of the pictures show wands as looking something like a carved twig. If this is the case, nearly all the woods named in the books produce pithy twigs. It would be a simple matter to run a wire through the twig, removing the pith, then pulling the core through the interior using string or thin wire. The wand would then be capped at each end and decorated...at least, that's how I always imagined it was done. In fact, when I was a child I used the very same inferred method to make myself a wand with a core of an owl feather :-)

We can assume that wands aren't mass produced because there would be no need for so many wands. Wizard usually uses his first wand their entire life so hand-made wands are not much of a stretch. Id say a wand blank must be prepared in advance (long, thin, straight branch without bark and hollowed out). Then inserting material to be aligned with length of wand, and magically sealing it with handle. Perhaps wrestling with it means aligning the core of the wand to sit just right inside of the wand.

Perhaps the wand and and handle are separate and the core is inserted into the wand tip and then the wand tip is slid into the handle and magically sealed to be seamless. This would explain why there is no evidence of a hole or wood putty. Another question is, if a wand's core must be magically placed in the wand, then how was the first wand made to create the other wands.

One idea I had for it was that maybe some kind of teleportation/apparition magic is used to basically materialize a chosen core inside the finished wand and displacing the wood inside, effectively switching places with the core before it was inserted, with no need to drill or seal any holes in the first place. Perhaps when wrestling with the core is mentioned, it is talking about how the cores and wand wood themselves are quasi-sentient, which means it would not be too much of a stretch to think that maybe with some wand/core fusions, one or both of the components 'disagree' either with one another or the wandmaker by refusing to teleport properly or at all, thus requiring them to be 'wrestled' into the wand.

Late answer but I want to point out that now, with the information on the USA magic school, we know that a muggle can make a wand, so I suppose the process is not magic, rather some form of artisan technique.

DiegoDiego
1
1
Add a comment  |
Highly active question. Earn 10 reputation (not counting the association bonus) in order to answer this question. The reputation requirement helps protect this question from spam and non-answer activity.

74
How did Molly Weasley make sauce out of nothing if Gamp's Law states that this is impossible?
17
Can a Person Be Chosen By More Than One Wand?

17
Why Does Ollivander Use Only Three Wand Cores?
10
How can Ollivander tell a wand has changed allegiance?
11
How does Ollivander decide what kind of wand to make?
6
Does any other wand share the same core as the Elder Wand?
8
Since magical creatures in Harry Potter have certain body parts that imbue magical properties, can wizards have the same?
8
How are some wand combinations more powerful than others?
5
Was Harry shown to struggle with his wand more than the other students?
1
Does wandcore or element affect a wand's ability?
54
Why are wands so cheap compared to their materials in Harry Potter?