In Chamber of Secrets, how is Dobby able to seal off Platform 9¾, something that is so important and acts as the gateway from London to Hogwarts. We know as a fact that house-elves have the potential of great, mysterious magic (for example, they are able to Apparate where wizards cannot) but sealing off something so universal to wizards is something really big, especially when it is stated:

It is not known exactly how Muggles do not, or cannot get onto the platform; however, it can be assumed that powerful magic of some sort is employed in order to keep them ignorant of its existence.

This implies that the platform itself contains powerful magic to transport wizards into another dimension (I'm not sure if this is the right word :/ ).

So the question is: How exactly did Dobby seal off Platform 9¾?

Regarding Muggles, I actually think it's possible they can access Platform 9¾ through the barrier. Over at Pottermore, J.K. Rowling writes this:

[T]here have been minor problems over the ensuing years, such as witches and wizards who have dropped suitcases full of biting spellbooks or newt spleens all over the polished station floor, or else disappeared through the solid barrier a little too loudly. There are usually a number of plain-clothed Ministry of Magic employees on hand to deal with any inconvenient Muggle memories that may need altering at the start and end of each Hogwarts term.

Think of a Muggle picking the barrier between platforms 9 and 10 to lean against to read the paper on what happens to be Hogwarts' return to school (Sept 1). Perhaps he would stumble on Platform 9¾

As I said in my comment, Dobby, a house-elf, has magic of his own that is different from wizarding magic. House-elf magic is very powerful; Dobby took a great risk performing the magic that sealed the barrier to Platform 9¾ without permission from his master, Lucius Malfoy (I believe it's safe to assume Lucius did not give Dobby permission to pull this stunt, seeing as Dobby was being secretive about why Harry should not return to Hogwarts and the Chamber of Secrets plot). It looks like sometimes house-elves can use their magic without having to have their master's permission.

‘Well,’ said Fred, ‘put it this way – house-elves have got powerful magic of their own, but they can’t usually use it without their masters’ permission. I reckon old Dobby was sent to stop you coming back to Hogwarts.’

I do see that Fred thinks someone sent Dobby to seal the barrier, but the overall story in Chamber of Secrets demonstrates that Dobby was acting alone to protect Harry on his own volition. Dobby is a free-thinking house-elf and it's entirely plausible that he would set out on his own to "save" Harry's life.

In 3407 pages (UK) and 4195 pages (US) spanning books one through seven, the specific type of magic Dobby used to seal up the entrance to the platform is not discussed or referenced. Having read the 3407 and 4195 pages of Harry Potter canon, both US and UK versions, I can say that the type of magic Dobby used is not exactly identified as far as I can recall. House-elf magic is not mentioned in Fantastic Beasts and Where to Find Them, Quidditch Through the Ages, or Tales of Beedle the Bard. Having pillaged those sections of Pottermore that are available to the public, I can note that house-elf magic is, again, not mentioned, specifically in the segment Flying to Hogwarts in the Chamber of Secrets section. I have never encountered J.K. Rowling addressing specifically what kind of magic Dobby uses to seal up the barrier to the platform in an interview or podcast. I have watched the eight Harry Potter movies and the type of magic Dobby uses to seal the platform is not mentioned or identified. Of course, please correct me if I'm wrong.

Moving a long way down the order of canon, one of the cards from the Harry Potter Trading Card Game is called Blocked Barrier, and the illustration makes it look like this was the spell used to keep Harry and Ron out of Platform 9¾. (The HP Wiki alternatively describes this as a barrier-sealing charm in their article about Platform 9¾.) 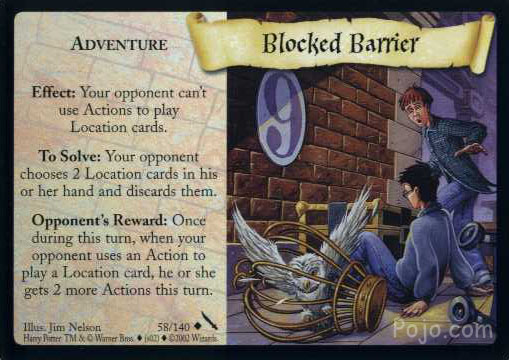 We don’t have any other details about how powerful this spell is, but it doesn’t necessarily need to be that powerful. Dobby isn’t sealing the barrier forever; he just needs to seal it for the twenty or thirty seconds until the train leaves. For all we know, his barrier will crumple at the first attempt to remove it, but that doesn’t matter for Ron and Harry, because they can’t do magic on the Muggle platform.

I’m not aware of any canon that addresses this spell in more detail, so I think this is probably the best we have.

24
Why Can't Parents Apparate With Their Students to Platform 9 3/4?
12
After Dobby seals off platform 9 3/4 in Chamber of Secrets, how did everyone leave the platform?

21
How did Dobby intercept Harry's mail?
11
How the Dursleys could be allowed to tell nothing to Harry?
37
How could the Marauder's Map detect something which Death could not?
12
After Dobby seals off platform 9 3/4 in Chamber of Secrets, how did everyone leave the platform?
25
What is the provenance of this Harry Potter and the Chamber of Secrets quote
14
How did Winky meet / know Dobby?
58
Why didn't Dumbledore make a sound when he appeared at Privet Drive?
32
How did Dobby curse the Bludger?