Do male elves have long or short hair?

I've noticed that almost every fan drawing of elves (as well as their portrayals in the movies) show them with long hair, both the men and the women. But did Tolkien ever write anything that proved that male elves had indeed long hair? I had always imagined them with short hair (the men, not the women).

There are a few passages where JRR provides explicit statements. Don't know that you can extrapolate to conclude that all male elves generally had long hair but JRR certainly indicated some of them did.

Elwe himself had long and beautiful hair of silver hue, but this does not seem to have been a common feature of the Sindar, though it was found among them occasionally especially in the nearer or remoter kin of Elwe (as in the case of Cirdan). – J.R.R. Tolkien, The War of the Jewels, “Quendi and Eldar” Elwe - one of the Nelyar, ancient Elves of Cuiviénen.

Then Celegorm arose amid the throng (p. 169). In Quenta Silmarillion this is followed by 'golden was his long hair'. In the Lay at this point (line 1844) Celegorm has 'gleaming hair'; his Old English name was Cynegrim Faegerfeax ('Fair-hair'), IV. 213. The phrase was removed in The Silmarillion text on account of the dark hair of the Noldorin princes other than in 'the golden house of Finarfin' (see I. 44); but he remains 'Celegorm the fair' in The Silmarillion p. 60. – J.R.R. Tolkien, The Lost Road and Other Writings: the Commentary to “On Beren and Tinúviel”

Fingon - He wore his long dark hair in great plaits braided with gold. – J.R.R. Tolkien, The Peoples of the Middle-earth: „The Shibboleth of Fëanor” . Fingon was a High King of the Noldor.

The hair of Olwë was long and white, and his eyes were blue– J.R.R. Tolkien, The War of the Jewels: “The Grey Annals” . Olwe was the younger brother of Elwe.

Tolkien drew an elf. That elf has long hair. 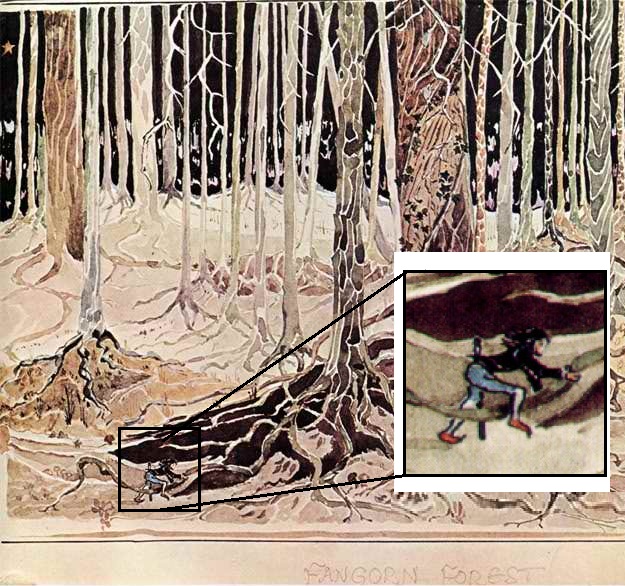 The only definitive statement I'm aware of regarding Elvish long hair is made in the latter Quenta Silmarillion phase 1 texts given in History of Middle-earth 10, regarding the Teleri:

But most it was their wont to sail in their swift ships upon the waters of the Bay of Elvenhome, or to walk in the waves upon the shore with their long hair gleaming like foam in the light beyond the hill.

Here "long hair" was an amendment from just "hair" in the 1937 Silmarillion. In the published Silmarillion Christopher Tolkien removed the "long", thus reverting it to the 1937 reading, for reasons I am not aware of (he doesn't note any such authorial change in the phase 2 revisions).

According to The Fall of Gondolin Glorfindel stabbed it in the belly, but as the balrog fell it reached out and grabbed his long golden hair, pulling him back down over the edge of the cliff.

I remember an article about the royal family of the Noldar in which Tolkien describes the hairstyles of several, and gave the impression that some of them had highly individual hairstyles.

Thus there might not have been an elfen male hairstyle worn by all male elves every where and every time.

Not the answer you're looking for? Browse other questions tagged the-lord-of-the-rings tolkiens-legendarium canon elves the-silmarillion or ask your own question.

76
What is the true origin of the orcs?
46
Why aren't the Valar considered gods?
8
Why did the Valar hold different attitudes towards Elves and Men?
9
If Aman was “taken away” at the fall of Numenor, where do the Elves (and others) sail to at the end of Lord of the Rings?
13
How long can elves go without sleeping?
38
Did the Elves do mathematics?
9
Tolkien's capitalisation of races, i.e. Elf, Dwarf, Orc
3
Are Warcraft elves descended from humans?