About 12 years ago I was in Blockbuster and while looking for something different I ventured into the VHS section. I can't quite remember my selection vividly because that night I rented 4 VHS for £1 and grabbed this movie purely out of curiosity to make up the 4 titles.

The movie I'm looking for must be from the 80's from what I remember of the cover as it art style had that classic Star Wars pencil/painting look to it. To my recollection, the picture was of a scary looking alien chasing some humans with some cheesy line like "They're here and they're hungry" (that's not the actual quote, but had that B-movie taste). I also remember the alien on the cover was blatantly nothing to do with or looked anything like the aliens in the movie, which is not uncommon for movies that age.

The plot, was the classic aliens crash landing in a country area (maybe even a farm?), they were carried by a meteor or capsule, definitely not a ship. This might have been a seed or seeds, as I distinctly remember a discussion about them being plant-life forms. The plot may have revolved around them being plants and laying seeds on a farm so they may spread while the group of heroes tried to stop this from happening etc. Their seeds may have even looked like normal crops and the farmers may have tried to protect these seeds from the heroes so they could sell these 'crops' for extra money as they didn't believe they were alien? This is about all I can remember.

There were only 3 actual aliens, and I seemed to be surprised at the fact each one was very unique looking and of a different race from each other. They showed no signs of higher thought other then the uncanny alien skill for hiding, stalking and killing, like 90% of other aliens from B-movies. I think one of them could only travel underground very fast and chased people, another one was a flying/hovering round/fat eyeball (like a deceiver) and was possibly hairy/fluffy? I cant remember anymore about the third one. They were very comical looking, not at all scary and definitely not visually plant like.

This looked like other movies and had same slasher/alien feel as Attack of the Killer Tomatoes, Critters and also The Deadly Swarm, if that is any help. I just love movies from around the 80's and would like to rediscover this as no one I know can remember ever watching it. I've googled it to death, checked countless Wiki lists on late 70's 80's and early 90's sci-fi, horror, cult movies but never had any luck. It is also possible like many other movies from these periods, that this film has multiple names and covers? I know I've personally bought a couple movies on DVD that have turned out to be the same movie (although these are mostly zombie movies).

This is an old post, but I saw it and couldn't resist. I think this is the one as it has 3 aliens, they're plant-based but don't look like it, one could fly and was 'hairy/fluffy', I think they arrive in a meteor and it is in the country. It was definitely B grade and went straight-to-video, and it had a painted cover. 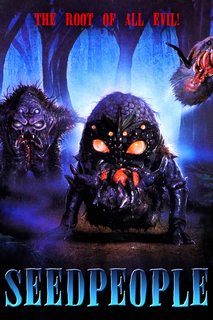 I think this may be "Pod People" aka "Extra Terrestrial Visitors". This was also parodied by Mystery Science Theater 3000. There weren't three separate types of Alien in that film though, only two - the juvenile and the adult. I do seem to remember the conversation about them being plant based though.

10
What is this old movie that featured round, flat creatures that killed by touch?
5
Science Fiction movie from the 80's or 90's about aliens that crash land on earth and are helped by a young girl
9
Please help identify this 2-part TV movie: Alien woman crash-lands on earth, falls in love, 199x
5
50s movie: octopus-like aliens take over people's bodies
8
Movie about aliens disguised as humans that turn out to be allergic to latex
9
Movie about an invasion of shapeshifting aliens, a college boy dates one in the shape of a model
7
'70s or '80s sci-fi movie about a team captured by aliens after their spaceship crash-lands on a planet
5
Identify movie about an alien disease that turns people to stone