In the Doctor Who episode "The God Complex", the creepy clown was whose worst fear?

In S06E11, Rita and Amy run into a room with a sad and rather creepy-looking clown: 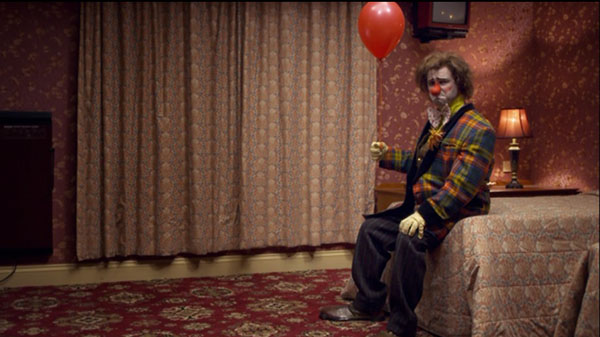 Both Rita and Amy had stated it was neither of their worst fears. Was it Rory's? Since his was never revealed and he never entered that room; or, was it an unknown individual's that was never "cleaned-up"?

It was never revealed, as listed on the Prison ship (The God Complex) tardis.wikia article :

An unknown individual who was afraid of clowns.

However, the clown could be the worst fear of anyone who never encountered him and that has no declared fear, this exclude Rory and The Doctor.

As for The Doctor :

Unknown fear, other than it being an event that set off the Cloister Bells and involving a familiar figure.

Rory was unique in that he had no overwhelming fear or fundamental faith; he was a victim of proximity to Amy and the Doctor, and as a result, the "hotel" kept showing him emergency exit doors which only he could see.

The wikia article list a Silurian, a Judoon, a Tritovore and a Hoix has having unknown fears, but it could also be an entirely unknown character. and there was also someone who was afraid of a PE teacher.

Note than the eleventh Doctor once said that he found fear of clowns understandable (Coulrophobia tardis.wikia article refer to episode Night Terrors).