Book about a soldier who gets transported to another world

I am looking for the title of a book I read ages ago. The soldier got transported to another world. He fights battles with his .45. Which is an technological edge. One of the characters is named Red Pilgrim, it could be an axe though.

The shaft of the axe is made from a magical tree. There is a giant sea monster called Acre Fin, because its fin is that size. The soldier also contracted some kind of a berserker disease. He also falls in love with a woman warrior who has a scar on her face. If anyone can tell me what book is this, I'd be much obliged.

Googling for "Acre Fin" and "Red Pilgrim" gives the title The Starfollowers Of Coramonde.

The plot summary is as follows:

Gil MacDonald, soldier and self-chosen exile from Earth, was searching for Yardiff Bey, the master wizard and archvillain. Bey had abducted Gil's friend Dunstan and was now plotting with his Dark Masters to destroy all that was good in this strange world of magic and mystery which the American had chosen.

Then Prince Springbuck sent Gil south with an enchanter and a baby girl--south toward the accursed lands of Shardishku-Salami, where Yardiff Bey waited, working his conjurations to capture Gil for his torture chambers.

Desperately, Springbuck followed with an army--to face a grisly host that could not be slain.

And above all hung the Trailingsword the comet that appeared only when the fate of the world hung in the balance! .

It could also be the prequel to this book, The Doomfarers of Coramonde 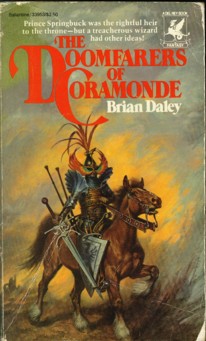 Just yesterday, Sergeant Gil MacDonald and his APC crew had been fending off an ambush in a Viet Nam jungle. In the middle of the firefight, some kind of magic spell had transported them to this Fantasy Land complete with flying dragons, wizards, crazy castles, and dispossessed princes. They would stay trapped here forever unless they could rescue the sorceress Gabrielle. Master magician, Amon, held her captive in his palace; and to reach her, Gil and his men would have to infiltrate Hell itself!