Was Picard speaking French and being translated the entire time?

Someone forwarded me this link titled Sudden Star Trek realization : 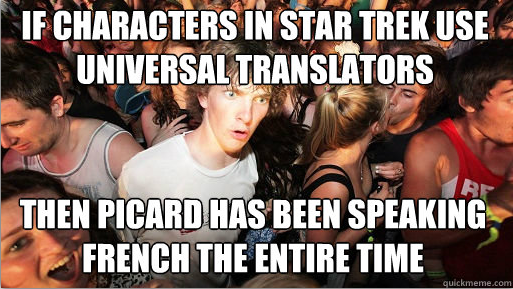 So, is there any clue that indicate that Picard is really speaking French and being translated to English by the universal translator?

No. In fact, I would say there is small evidence to suggest he is speaking Federation Standard (thought to be a form of English).

In 11001001 (S1E15), the Bynars upgrade the Holodeck to create characters and environments that produce more realistic interactions. Riker creates a jazz bar and it is populated with a sophisticated holographic women named Minuet. At some point, Picard goes to the Holodeck to see how Riker is doing, and meets Minuet. She recognizes his French surname and begins talking to Picard in French, and he replies in French. Meanwhile, Riker stands there looking impressed that Minuet knows French. (The entire script for the episode can be found here.)

The point of that little anecdote is that if the universal translators were constantly altering Picard's speech from French to English, then it would have been no different in this situation. Riker, and us, would have heard the conversation in English anyway. We can confirm that Riker heard French from the episode's script:

Riker is surprised that she speaks French and a little jealous that she and Picard are hitting it off so well.

Since Riker heard French in this interaction, we could assume that this is not standard for Picard to speak French. It is more likely that he uses Federation Standard in everyday interactions.

I think you could also make a logical argument that Picard uses Federation Standard rather than French. In order to be captain of a ship, it would be much easier to have a common language. What if the universal translators broke down? From a command perspective, this would be pretty detrimental to making sure things run smoothly. Memory Alpha also notes that Federation Standard is

used in official documents by the Federation government

so it must have been used by Picard regularly.

I think the anecdotal evidence and widespread use of Federation Standard shows that Picard was not speaking French for the entire show.

There really isn't any firm evidence either way. I was about to raise the fact that Picard is explicitly heard to say, "Merde!", untranslated in "The Last Outpost", as evidence that he is not usually speaking French. Then I realized that doesn't really constitute evidence either way, and here's why.

By and large, from Star Trek: The Motion Picture forward, alien languages are used mainly for "color", even when aliens are speaking amongst themselves. For example, in that movie, the scenes on Vulcan, and on the Klingon cruisers, are all enacted solely in their respective languages.

From that point forward, however, even language amongst aliens is usually rendered in English...unless the writer or director has decided for dramatic reasons to do otherwise. This sort of device is not confined to Star Trek by any means, or even science fiction. These reasons seem to include:

Most of the time, everyone appears to understand everyone else, except on occasions when the translator is either confiscated (The Undiscovered Country) or doesn't have the necessary cultural information ("Darmok"), or it's otherwise convenient for the writers (various occasions when Worf spouts something in Klingon and people say, "What's that mean?") In short, not just the Universal Translator, but language itself, is a plot device, which unfortunately means it behaves however it needs to behave for a given plot, without much consistency.

None of which solves the dilemma of the original question either way, I'm afraid; any more than we really know, most of the time, what language the Doctor is speaking in Doctor Who (cf: "Does The Doctor hear everyone speaking in Gallifreyan?"). It's certainly possible, however, that throughout Star Trek, characters may have been speaking their own native language, even when we're hearing English.

In the TNG episode "Code of Honor" Data tells Picard(?) "For example, what Lutan did is similar to what certain American Indians once did, called 'counting coup'. That is from an obscure language known as French. Counting coup..." http://en.memory-alpha.org/wiki/Code_of_Honor_%28episode%29

Surely Data would have noted if Picard were actively speaking French at the time.

Not the answer you're looking for? Browse other questions tagged star-trek languages translation or ask your own question.

50
Does The Doctor hear everyone speaking in Gallifreyan?
53
Is Picard actually fluent in French?
68
If there are universal translators, why are some words/phrases not translated?
17
Are there any human Star Trek characters who have native languages other than English/Federation Standard?
15
Why does the Federation insignia have two acronyms?
9
In Star Trek, are the humans actually all speaking English?
12
The signing of the baseball in DS9 Take Me Out to the Holosuite

68
If there are universal translators, why are some words/phrases not translated?
70
Why didn't a French actor play Captain Picard? What was the reaction to this on the part of the French?
9
Why did Picard believe the time-traveler?
11
Why would Uhura's linguistic skills matter?
9
Why was "The Lord of the Rings" translated as "In de Ban van de Ring" in Dutch?
53
Is Picard actually fluent in French?
9
In Star Trek, are the humans actually all speaking English?