Do the leaves of Yggdrasil (the World Tree) have any special properties?

Do the leaves of the World Tree (Yggdrasil) have any special properties in Norse Mythology? How about in other fantasy works, including comics?

The World Tree Yggdrasil was supposedly the anchoring element between the nine realms of Asgard. While no legends speak specifically of the leaves, the wood of the tree was reputed to be used by Wotan (Odin) as the mighty spear of heaven, Gungnir (from the Old Norse "swaying one").

Mythology: In The Ring of the Nibelung

In Wagner's opera cycle Der Ring des Nibelungen, Wotan's (Odin's) spear is made from the wood of the world tree Yggdrasil and engraved with the contracts from which Wotan's power derives. When he tries to bar the eponymous hero of the opera Siegfried from awakening Brünnhilde from her magic sleep, Siegfried breaks the spear in two and Wotan flees. It is implied that this is also the end of Wotan's power and he never appears onstage again.

Given the tree spanned the Nine Realms, supported numerous creatures within its branches, survived being gnawed on by the Midgard Serpent, it seems plausible there would be other properties of its leaves, but legends (such as they are) do not speak to any particular properties. 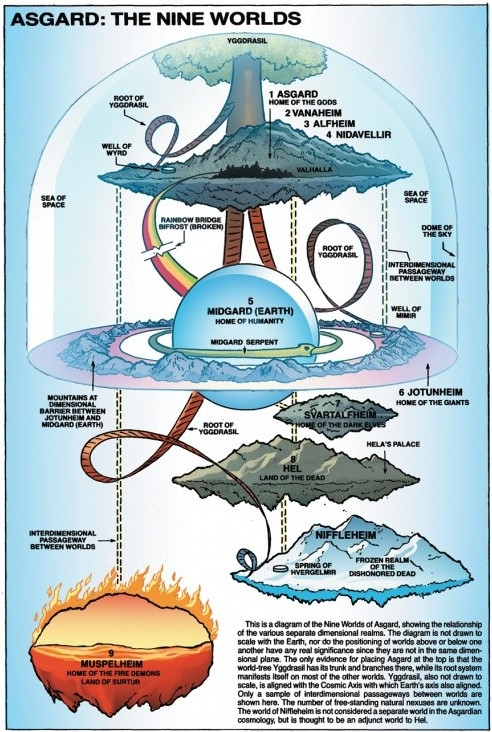 The Marvel Comics representation of the Nine Worlds from the Handbook of the Marvel Universe.

This unfortunately is an answer of there are no stories of the leaves of the Yggdrasil. There are stories of various animals that live in the tree and the roots are gnawed on by the world serpent and various other myths mention the roots and pools that spring from them. The only story that might come close to any magical properties is the story of Líf and Lífþrasir who are the survivors of Ragnarok. Although the stories differ on whether or not it is Yggdrasil that they hide in and it's not clear if the leaves shield them or if they hide in a hollow of the world tree. Yggdrasil is supposed to be an Ash tree it doesn't seem to have magical properties it's self as much as it is a bridge between all worlds which means that magical beings and things happen to it and near it rather than it being the cause of them. Also no known reference in comics or stories. Is there something specific that you remember or are you just wondering because now I'm intrigued about it. One more side note the Norse myths are more about action of characters than of items. It seems an element of Norse mythology that anything could be magical and the world just is. It's the way that it's dealt with that matters.

Not the answer you're looking for? Browse other questions tagged comics mythology or ask your own question.

17
Is there any basis for The Destroyer in Norse Mythology?
30
How are the Nine Realms situated in space?
2
Does the attempted invasion of Midgard by Frost Giants figure into any Nordic myth?
15
His Dark Materials - Mythology and Symbolism Behind Dæmon Forms
10
Why are Tolkien’s Elves tall?
6
Who is Oberon in the Dresden-verse?
29
Are there any individual aliens that have gained superpowers in the Marvel universe?
15
Is there a real-world mythological counterpart to WoW's "kill your gods for power" theme?
9
In the comics is Spider-Man special in that there is always a different version of him across realities?