Why did Karstark think Robb lost the war when he married Talisa?

I think you lost this war the day you married her [Talisa].

Why did he think so? I know Robb was supposed to marry one of Walder Frey's daughters, but what did he really lose by marrying Talisa?

He was promised to one of the Frey girls in exchange for crossing the bridge, but now that's irrelevant.

It also doesn't look like he had many of Frey's men to begin with, since in Season 3 Episode 5, "Kissed by Fire", he considers asking for their help to replace a chunk of his army. Additionally, it doesn't look like Frey's army is that large; Robb's army outnumbered Frey's five to one when they crossed Twins.

So why did Karstark believe the war was lost when Robb married Talisa?

It's more than that. Supply lines, and 3000 troops were also on the line. Robb was far from home, and needed all the help he could get, especially as far as troops and supplies. In addition, no one could fully trust him after he broke the treaty.

The Twins was one of the most powerful strongholds in Westeros, and overall was a very powerful location. Their leader, Walder Frey, is a powerful man, with a quick temper, and without much to lose, thus willing to do anything to get back against the perceived injustice.

It later proved that these words were prophetic. Robb Stark dies at the hands of the Freys, in direct response to this betrayal.

I think he was referring less to the political ramifications of the marriage and more about how it was affecting Rob.

Previously Rob was single-minded and focused on his military campaign, and now he had fallen in love and had a wife. Lord Karstark believed that would begin distracting him and clouding his judgment.

I seem to recall that the conversation arose as they were discussing breaking off the military campaign to attend his grandfather's funeral. Already he witnessed Rob wasting time on an emotional trip to a funeral and risking giving an advantage to the enemy. With a wife to think about, care for, worry about, spend time with etc. Lord Karstark could only see this getting worse.

Talking about the series, it isn't just "a chunk of his army", Robb says: "The Karstarks are gone, almost half our forces".

So lose half his forces is indeed losing the war.

He lost the Frey army when he married Talisa, who brought no army with her.

So this is a simple maths problem, where the army with more men should have the advantage to win the war.

We aren't taking into account the consequences of not keeping promises with the Freys, like her mother said: "Walder Frey is a dangerous man to cross".

Strategically he was screwed, logistically he was in a very tough spot. So when you add all of this together it becomes apparent why Karstark made the statement.

Here is the map of that part of Westeros so you can see the importance of The Twins. 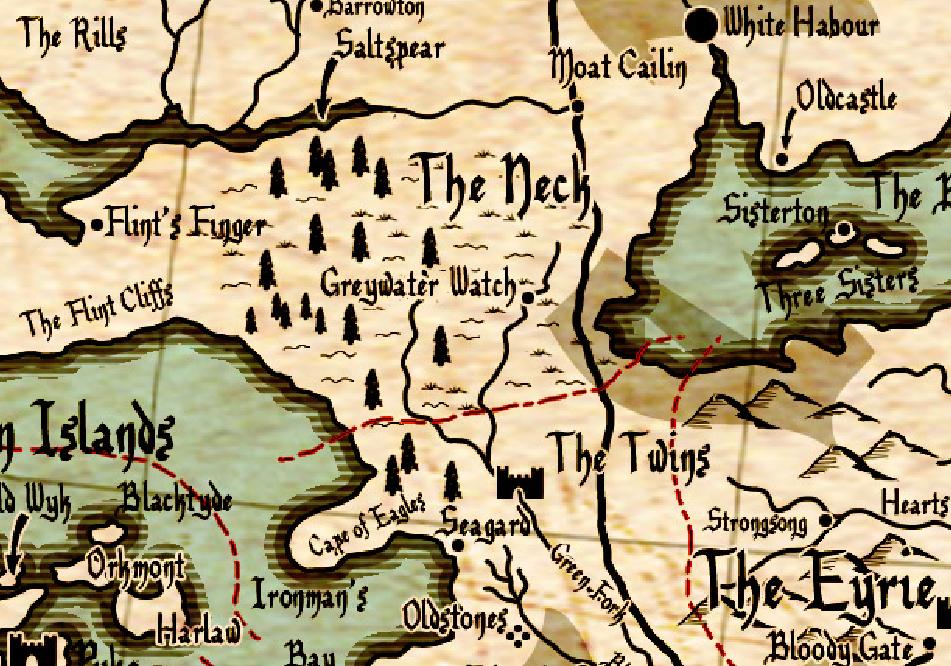 31
Why did Robb not pursue alternative ways of crossing the river in “Baelor”?
7
Why didn't Robb Stark march his men down the west side of the trident?
16
Did Robb have a Hand of King in the North?
9
In the show, did Robb Stark legitimize Jon Snow?
4
Did Robb and Catelyn ever come to know why Ned acted as he did?
11
Why didn't Robb Stark give Rickard Karstark the option to take the black?
21
Why was Robb Stark married under the Light of the Seven?