Where were the Avengers during Iron Man 3?

When the real villain kidnapped the President of the United States,

it is never explained why none of the other Avengers came to help, or why Tony didn't call them. The only explanation so far is: "it was an Iron Man movie...", but an in universe answer would be good.

It isn't known where the rest of the Avengers are during the kidnapping. Since the entire event happens in the space of about eight hours, it could simply be considered too difficult to gather the Avengers in that short space of time.

Most importantly, in the comic genre, it is common for a superhero to be alone on a mission even though the world is slathered in potential metahumans who COULD be available but aren't. We are supposed to accept the idea superheroes are always engaged in something which occupies their time and makes them unavailable to the star of the comic we're reading. Comics poke fun at this sometimes when they have the Avengers call the Fantastic Four and Reed Richards answers from the Negative Zone saying he wishes he could help but they have their own problems. 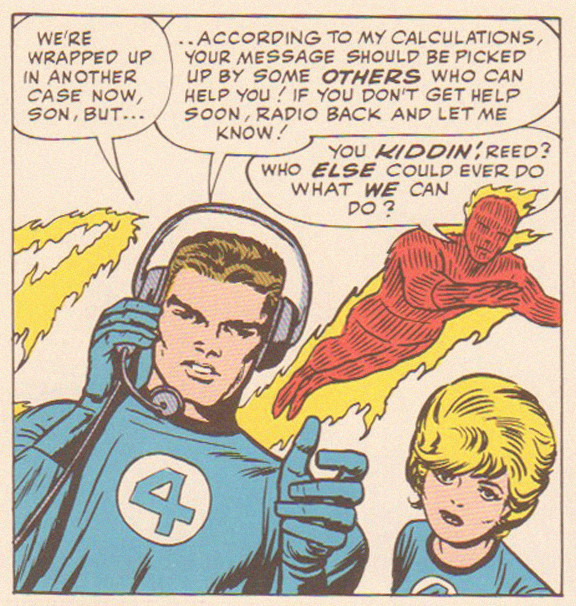 Journalist: After cell phones came out horror directors had to come up with elaborate ways to explain why people wouldn’t call someone on a cell phone for help, now that all The Avengers know each other do you have to come up with excuses for why Tony Stark wouldn’t reach out when he needs a hand?

Feige: It’s a good question, and it’s sort of half and half. I am betting that like the comics you don’t have to keep – if you are reading a standalone “Iron Man” comic, they don’t spend every page explaining where every other Marvel hero is. The audience kind of accepts that there are times when they’re on their own and there are times when they are together. I’m betting that movie audiences will feel the same way. That being said, there is a little bit of lip service here and there to that. There is also just the very nature of Tony wants to, once he barely survives that house attack you saw today, and even you saw it in the message he left for Pepper, he’s basically saying “I’m going off the grid to try to figure something out.”

Since the release of Thor: The Dark World and Captain America: The Winter Soldier, we can now answer this question more thoughroughly.

Spoilers for Captain America: The Winter Soldier, Iron Man 3, Thor and Agents of SHIELD below.

In Captain America: The Winter Soldier we learn that Hydra secretly infiltrated SHIELD in the early days of it's formation, and have been shaping world events ever since, including the death of Howard Stark and the assassination of JFK. They specifically mention that they have been funding terrorist groups, and as such it is safe to say that the 10 Ring Terrorist group (which turns out to be AIM) were funded by Hydra, and as such their activities were being masked from SHIELD from with in. This is further backed up by Hydra having access to Extremis in Agents of SHIELD (although at first they are at known as Centipede in early episodes).

Captain America, Black Widow and Hawkeye all work for SHIELD, and as such wouldn't have known that the events of Iron Man 3 were occurring as it would have been hidden from them in order to keep distruption to a minimum. Thor was off world fighting the rebellion caused by the Bifrost being destroyed in Thor. However, Bruce Banners location throughout what is known as "Phase 2" of the Marvel films is still currently unknown.

Although an answer has been selected, I'll give it a try.

The reason the Avenger's haven't been assembled is that the problem isn't important enough. The Avengers are assembled for really big threats - extradimensional/supernatural invasion or unstoppable machines out to exterminate mankind. A mere supervillain threatening the security of the USA falls under the heading of mundane and near-trivial. It's like the story of the Texas town undergoing a riot which called for help from the Texas Rangers and one Ranger showed up. His response to protests that they needed more help: "One riot, one Ranger".

Same with mere international terrorists: one villain, one Avenger. If Tony isn't up to the task, there's always time to get the rest of the team together. It's not as if humanity is in danger.

Not the answer you're looking for? Browse other questions tagged marvel marvel-cinematic-universe avengers iron-man iron-man-3 or ask your own question.