Why did Frodo travel with the elves who were leaving Middle Earth?

In the book The Fellowship of the Ring, the elves that Frodo, Pippin, and Sam meet on the road were High Elves leaving Middle Earth by way of the Grey Havens. Yet the Hobbits travel with them for a time. Isn't the Grey Havens on the other side of Hobbiton, and in the opposite direction from Rivendell? So wouldn't traveling with them back-tracking for the hobbits, or if the elves went with the hobbits wouldn't they be back-tracking?

This is the map at the beginning of the book: 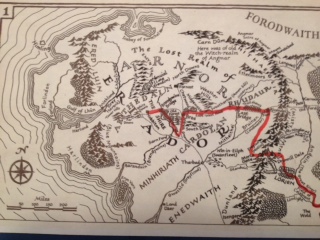 This clearly shows that the hobbits traveled due east until they got to the Brandywine Bridge. They meet the elves halfway on the first segment of their journey, so wouldn't they be back-tracking?

The elves were going to "the hill above Woodhall" and Woodhall is nearly due west of the Ferry. The road goes South from Hobbiton where it meets The East Road. The East Road goes nearly East and crosses the Brandywine Bridge. 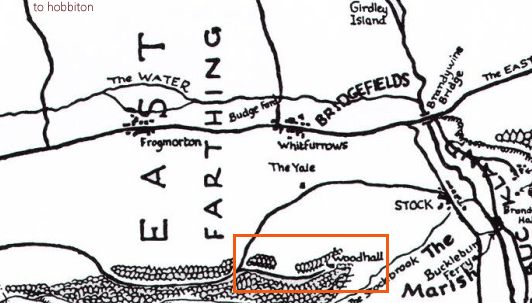 They run into the elves on or near the road that cuts through the trees in Woody End, somewhere close , but to the East of the branch. They took the "right branch to Woodhall" around "twilight."

They walked some, hid from the Black Rider, found the Elves, and walked some more to the Hill where the elves appeared to have a prepared place (a Grey-Haven Highway Authority Welcome Center)

The Hill was slightly North of the direct line to Buckland, but not really out of their way, considering the safety it afforded them.

Regarding the elves in question: they are not on their way to the Grey Havens. "We too are only tarrying here a while, ere we return over the Great Sea. But some of our kinsfolk still dwell in peace in Rivendell." They are living in the region and indications from the conversation are pretty clear that they were there even 17+ years prior when Bilbo left. At one point on the Hill in the evening, Gildor tells Frodo that he last said farewell to Bilbo on that very spot where they sat talking.

Gildor can easily be 1,000+ years old, so the exact duration of "a while" might mean something different to him than to you or me.

At this point in the book, the hobbits are not heading for Rivendell - they are simply heading for Frodo's new house in Crickhollow. They are in no great rush (even though Frodo aware of the Black Riders seeking him), and so would not be greatly perturbed at heading out of their way.

So, to answer your question of "Why?", I respond with "Why not?" - meeting the elves is a rare enough event that Pippin and Sam had never done it before, and I'm almost sure even Frodo hadn't either (although possibly once or twice with Bilbo). The elves were willing to have their company, and Frodo had questions about the world beyond the Shire, and about the Black Riders, which they could answer for him.

Not the answer you're looking for? Browse other questions tagged tolkiens-legendarium the-lord-of-the-rings elves the-fellowship-of-the-ring hobbits or ask your own question.

32
Why was a fox able to think about the hobbits on the road to Rivendell?
12
Why did the Old Forest respond to the hobbits?
8
Where did Bilbo wander?
5
How much do hobbits weigh?
20
Why did the Fellowship scatter so chaotically at Parth Galen?
100
Why didn't Frodo take a map with him?
13
Where else did Gildor see Bilbo?
12
Why did it take less time to go from Rivendell to the Shire than it did to go from the Shire to Rivendell?
35
What were the two standing stones that Frodo sees?
16
Were the leaders of the Shire counselors of Arnor after the time of Sam, Merry, and Pippin?