What happens with Krypto when Superman becomes an adult?

What is the reason that Krypto no longer appears?

There was no canonical tidy end, but he died in pre-Crisis Action Comics #583, via the Kryptonite Man: 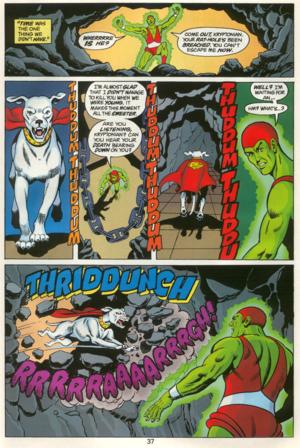 This was a flashback/retcon, likely to address the lack[s] of closure. Assist to @KHW: "This version of Krypto (Earth-One), including all history and corresponding appearances, was erased from existence following the collapse of the Multiverse in the 1985-86 Crisis on Infinite Earths limited series and is now considered apocryphal." - from Krypto's Wikia article.

5
How were Krypto and Superboy able to fly after Luthor made our yellow Sun red?
2
What exactly is Mongul from (pre-Crisis) Superman comics, and is he stronger than Superman?
5
What happened to Lady Dracula in Superman?
3
Do any members of the Legion of Super-Pets have Kryptonian capes?
7
What happens if Superman is near a white dwarf star?
4
Did Superman ever regain his memories of his Legion adventures with Supergirl?
16
What happens when adult Billy Batson says “Shazam”?