I do not know the game series, although I've talked about briefly with a friend who insists that the series is reasonably faithful to history.

(from Zaid Saiyed via Quora)

If you're asking whether the Assassins of the series were based on any real historical evidence, then there is a tentative yes.

If you're asking if they are faithful to the existing historical representation of such an order, its a resounding no... BUT THAT'S ONLY BECAUSE THAT'S WHAT THE TEMPLARS WANT YOU TO BELIEVE!! ... I Kid, I Kid. 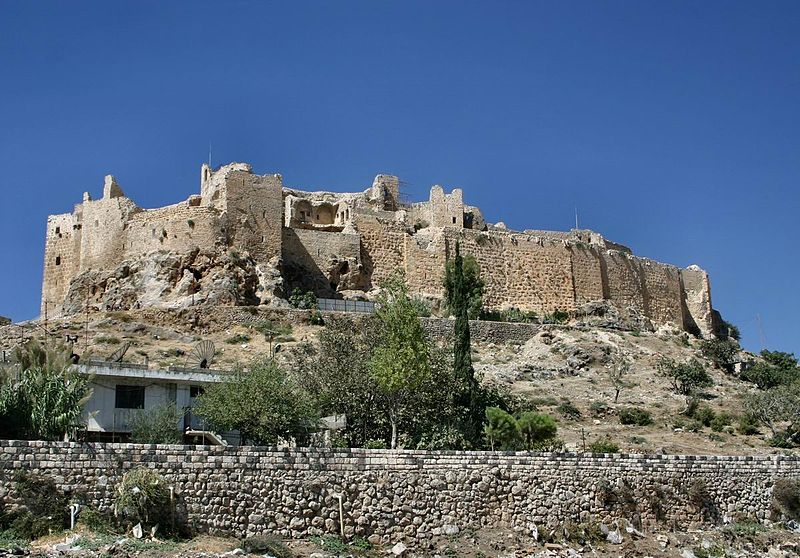 Masyaf was a real place, located in western Syria, and was famous for being the headquarters of the Hashashins.

The Hasahsins were, as far as widely accepted historical account has it, a type of soldier who was so obedient to their commander, they would willingly submit death in execution of duty: their own or that of another man.

William Dalrymple, a travel historian, visited the site whilst following the journey of Marco Polo. I take this extract from his description:

The fortress at Masyaf is a wonderful ruin, straight out of one of the gloomier corners of a Burne-Jones Canvas. [...] It squats heavily on a pinnacle of rock above the town, framed on one side by the peaks of the Alawi mountains, on the other side by a windbreak of cypress and the flapping felt tents of a Bedouin encampment. It's weak curtain and irregularly placed, irregularly shaped towers of rough cut granite could never have been a very serious deterrent for attackers, yet it is just the sort of castle you would have expected an Assassin to live in.

HOWEVER, Masyaf is not the true home of the Assassins.

The Assassins existed within the Assyrian empire, (at the level of folklore, parable, or at least a fear mongering order who were very early PR spin doctors!) since the 13 Century.

In The Travels of Marco Polo, a lengthy section of the book is dedicated to explaining Mulehet, The Eagles Nest; a Persian stronghold as observed in 1270AD.

Whilst reading this beautiful passage from the book, bear in mind that reputation and standing were generated entirely by word of mouth on what was a largely fractured globe, unable to share a common language and understanding of propaganda;

Now the Old Man of the mountain caused a certain valley between two mountains to be enclosed, and had it turned into a garden, the largest and most beautiful that ever was seen, and filled it with every variety of fruit. In it were erected pavilions and palaces, the most elegant that can be imagined, all covered with gilding and exquisite painting. And there were runnels too, flowing freely with wine and milk and honey, and numbers of ladies and all the most beautiful damsels in the world who would play on all manner of instruments and sung most sweetly, and danced in a manner that was charming to behold. For the old man desired his people to think this was actually a paradise. 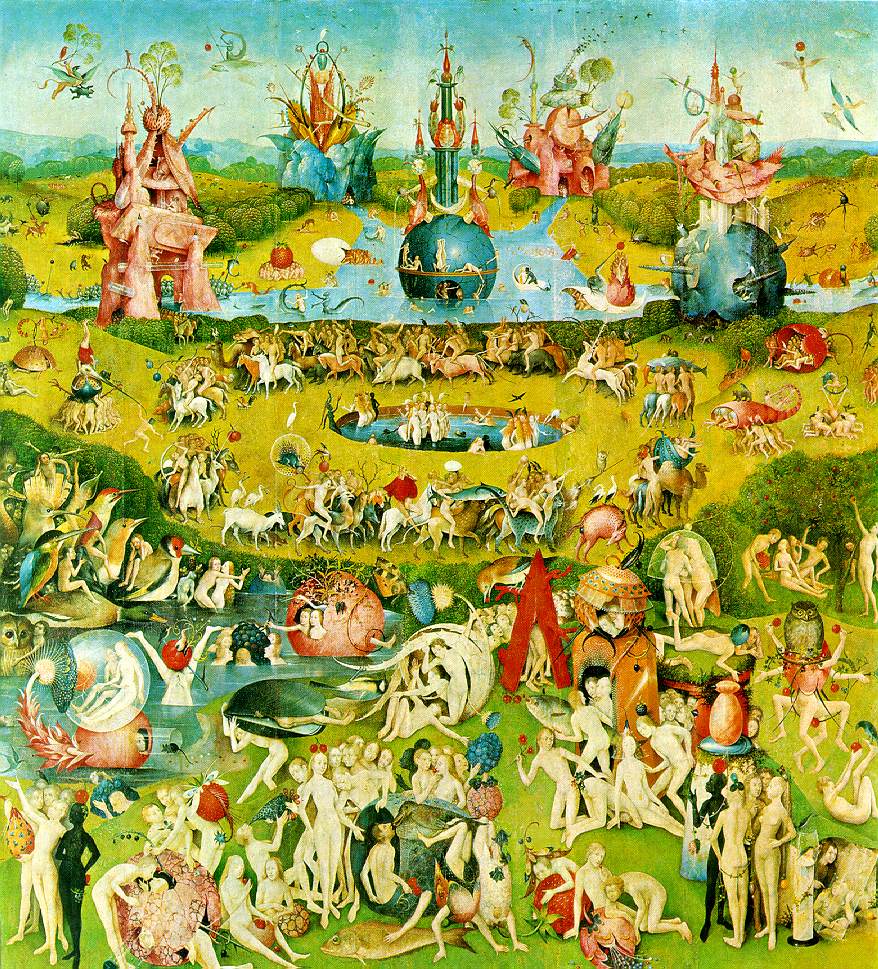 Now that sounds nice, right? The castle of Assassins creed was a strictly military installation, and the men are (for as far as we can see) more or less eunuchs. Their sole purpose seems to be the fulfillment of their responsibilities and duties, not wicked R&R.

It's not even until Black Flag that we get a main character that looks keen to, ahem, unsheathe his sword. And even then he's not a real assassin.

Polo goes on, describing how Hashashins were recruited.

Now no man was allowed to enter the garden, save those who were intended to be his Assassins. And there was a fortress at the entrance to the garden, strong enough to resist all the world. The old man kept at his court a number of youths of the country and to those he used to tell tales of paradise. Then he would introduce them into his garden, some four or six or ten at a time, having first made them drink a certain potion which would cast them into a deep sleep, and then causing them to be lifted and carried in. So they awoke and found themselves in the garden, and deemed it was paradise in very truth; and the ladies and damsels dallied with them to their hearts content, so that they had what young men will have; and with their own good will they would never had quitted this place.

Honestly? Me neither. Sounds like a neat joint to hang out.

Doesn't sound much like the noble sense of purpose that seems to attract most of the Assassins within the games/books/etc though, does it? Who'd have though Altair was doing his thing because he got wasted and fell for a honey-trap?

Now when he wanted one of his Assassins to send on any mission, he would cause that potion whereof I spoke to be given to one of the youths in the garden, and then had him carried into his palace. So that when the young man awoke he found himself in the castle and no longer in paradise; whereas he was not overwell pleased. And the old man would say to such a youth; 'Go and slay so and so; when though returnest my angels shall bear thee to paradise.'

So he caused them to believe; and thus there was no order of his that they would not affront any peril to execute, for the great desire that they had to get back to that paradise of his. And in this manner the old one got his people to murder anyone whom he desired to be rid of..

So if the Assassins creed series wanted to be REALLY historically accurate, Altair would have been a crack head with a five day boner. Those spaced-out deathbed confession sequences would have been pretty awkward to fit in the game though, so I'm glad they relaxed a little. 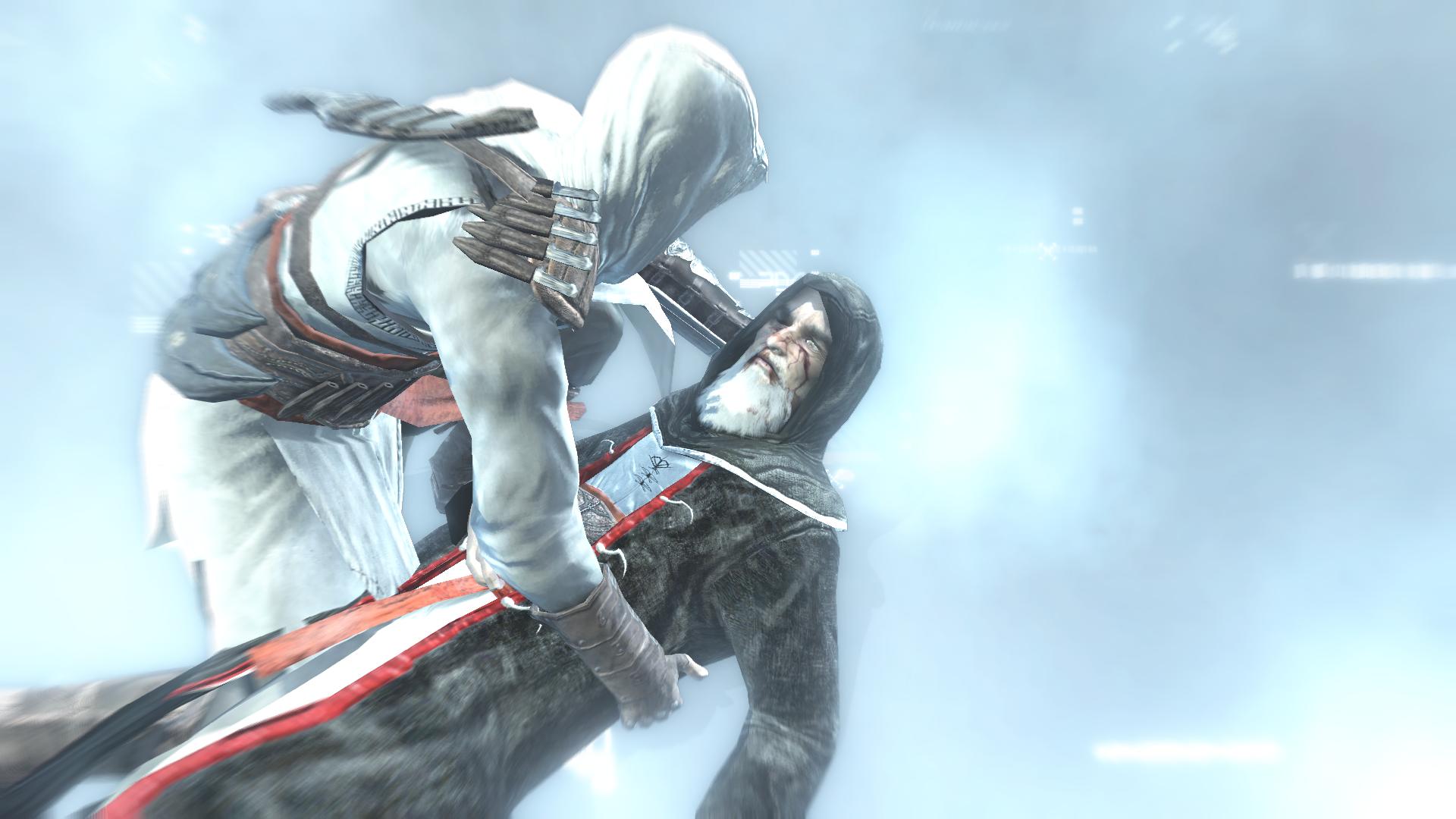 Other details used by the production team match historical accounts more closely, however.

During the Crusades, Prince Henry Of Charlemagne (who later became King of Jerusalem -surely a trustworthy witness!?) was escorted around Masyaf (Mulehet had been destroyed by Persians some years earlier) by the master of the Hashashins guild, who identified himself as The Grand Master of the Order.

According to what counted as historical records of the time, not to mention the Kings biography:

The Grand Master asked the Prince if he had any subject as obedient as his own, and without waiting for a reply made a sign to two of his Fida'i. They immediately jumped off the tower on which they were standing, and plunged straight to their deaths on the rocks below. 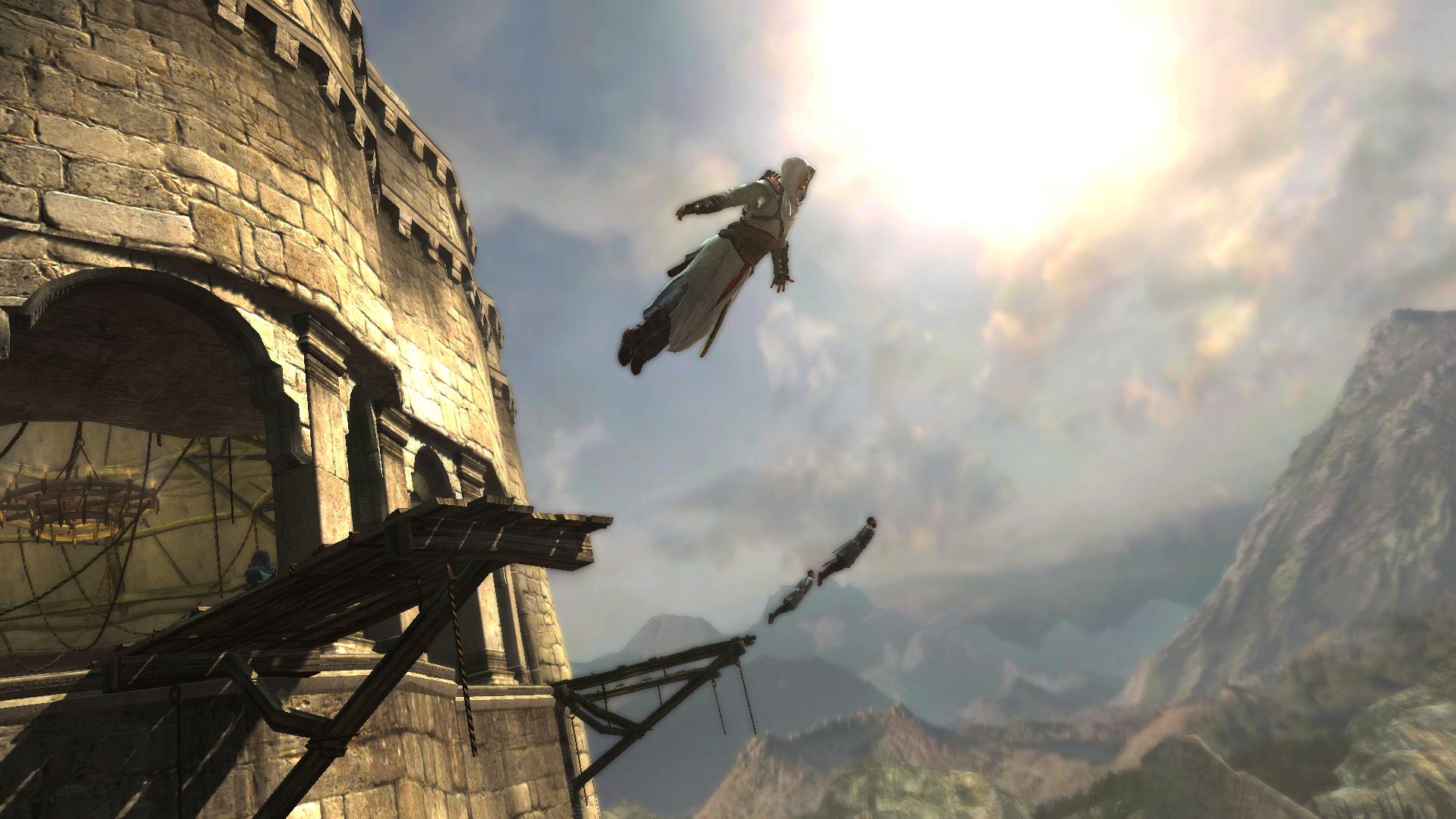 So far, pretty hit and miss as to how they've been represented.

But did they go on to become a master order of history shaping, templar defeating renegade mavericks?!

Sorry. According to all the various sources, almost without dispute, the Hashashins fell foul of not only the Mongol hordes that were ravishing most of Europe, but also the Mameluke Sultan, Baibars. Not to be confused with the Biebers. 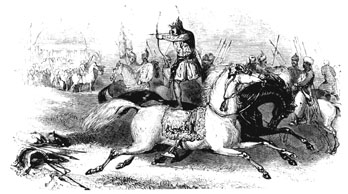 In 1273, He entered the al-Garb, slaughtered and sieged his way through the fortress leaving only a pile of human skulls as any physical indication that the Hashashins had even lived at Masyaf.

Any evidence of a real clan of Assassins is, after this event, only hoax and the fearsome reputation of the original clan being dug up and recycled.

Having contributed nothing to Architecture, the Arts or their environment around them, The Hashashins legacy is simply the word 'Assassin', which takes its etymology from the sect.

For centuries the Hashashins were considered the absolute boot-scum of polite society. A Group of loosely gathered mercenaries, pitched up to boiling point by a mixture of narcotics and fanaticism, and unleashed upon whoever their masters deemed worthy.

No Wonder they make for such interesting computer game characters!

There's ample research put in each game to fit within the game's setting (3rd Crusade, Renaissance-era Florence and Rome, Ottoman-era Istanbul, American Revolution). There are also several tie-ins (novels, comics) which take on other aspects of history, with the Assassins' twist.

There are, nevertheless, factual errors within the twists, but these were unintentional.

The main schtick is in the games' overarching story, being that history itself is manipulated by the Templar Order. Assassins and Templars are at war from the 12th century and onward, Templars being bent on total world domination and the Assassins are the only ones getting in their way. History, as we know it IRL, is what the Templars would want the world to believe.

The games (especially Assassin's Creed II) add a lot more information on various events of the past centuries, twisting them so that the Templars are behind most of the events of history as we know it.

As the player visits a lot of real world locations, a lot of real (albeit potentially erroneous) historical data is added about various landmarks, people and events.

I'm suddenly reminded of the room in the Villa Auditore with all the "great assassins of the past". They were responsible for the deaths of various "tyrants" in history, namely Genghis Khan, Cleopatra, Alexander the Great, etc. If you were referring to those assassins, they too are fictional.

Yes, they are loosely based upon the Hashishin (actually a derogatory term used by their enemies) from which the modern day term "assassin" is derived.

While assassins have existed throughout history; Assassin's Creed is historical science fiction.
The creators did desperately try to make a historically accurate American Revolutionary version, but there were still many historical inaccuracies; here's one example

The assassins were not real historical figures, however, characters in the story are real such as Leonardo Da Vinci, Niccolo Macchiaveli, George Washington, Charles Lee, Blackbeard, and more.

Adding onto idk's point, in Assassin's Creed: Brotherhood, the protagonist, Ezio Auditore da Firenze, interacts with Niccolo Machiavelli so frequently that it's implied that Machiavelli wrote The Prince about him. I have not gotten around to reading The Prince yet so I can't confirm or deny that Machiavelli featured a character in that book similar to Ezio, but Ubisoft may very well have borrowed qualities from that book for Ezio's character development. However, he is not based on any real historical figure.

18
Where did the "Memories transferred through DNA" idea used in Assassin's Creed come from?
8
In Assassin's Creed: Embers, who talked to Ezio before the end?
8
What are the Animus death scenes, in-universe?
3
How are the assassins from the first three games related to Desmond?
9
When did the "Mutant Problem" begin?
8
Wonder Woman and world history in the DCEU
8
Was "Assassin's Creed" based on the 1907 book "Lord of the World"?
3
Why was Bucky Barnes named after such a disastrous figure in American history?