Significance (or otherwise) of the Headless Spiro Agnew

There have been many disembodied heads depicted on Futurama, some of which have obtained some form of body at one stage or another (e.g. Nixon procuring 1st the body of Bender then of a Transformer, or the Star Trek crew in "Where No Fan Has Gone Before"), but there is only one beheaded body.

Given that Futurama comedy writers are known to bury jokes deep (it took me a long time to get the background of the joke with 'Nixon & Chequers the dog'), I was wondering if there was some 'in universe' reason for Agnew being headless.

I was hoping it might be for a comment to the effect 'We can all make it through this, if we can just keep our heads..' in relation to Watergate or .. they asked permission to portray him and were threatened with law suits if they depicted his 'face or voice in any form'.

Of course, it might come down to the 'rule of funny', after all, Agnew's headless body is always comedic, and the entire comedy vehicle could be justified purely for Nixon's single line while waiting to leave Earth on a stone space craft.. 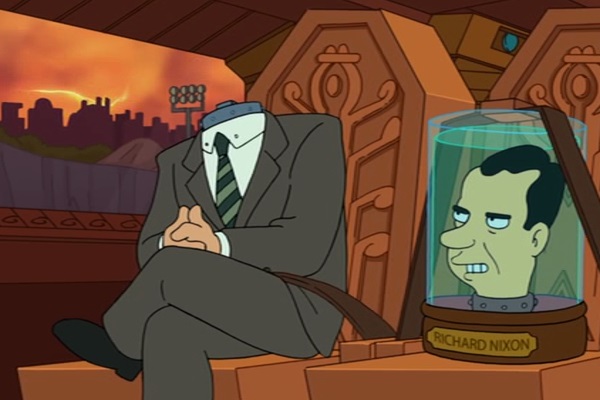 I still don't see why you get the window seat..

Is there a definitive reason why Spiro Agnew is depicted headless?

I think you might be reading into it too much.
He's literally (and figuratively) brainless because of the dumb things he did as the VP. Agnew was the only VP with criminal charges brought against him (extortion, bribery, tax fraud, conspiracy) he resigned to avoid the worst of it and later he publicly made anti-Semitic remarks.

Agnew's history of saying obnoxious and provocative things about his opponents (eg. negative nabobs of negativism, effete corps of impudent snobs) might account for it. Maybe Groening figured a perpetually alliterative Agnew would be harder to write for.

The gag is that he is the opposite of the heads in jars. They all lack their bodies but Agnew is missing his head. Any further comedic material is probably what was mentioned here.

It's clear, if you read some wikipedia or other information on Spiro Agnew; the joke is that for decades Spiro Agnew was denied a Bust. All Vice presidents and presidents have a bust made of them. Even Nixon has one.. but Spiro Agnew never had one made until close to the time of his death in 1994 (He died in 1996). Yep.. That's the reason he has no head. because in real life he didn't have a bust!

Not the answer you're looking for? Browse other questions tagged futurama plot-device or ask your own question.

2
The Bermuda Tetrahedron
6
When did Nixon go from having his huge robotic body, to Agnew?
6
What is the story behind the Thug Life tattoo?
20
In the original airing of the pilot, was Nibbler's shadow drawn under the desk in the cryogenics lab?
9
Significance of the word Bort!
13
What is the significance of Chewie's white patch?
21
What's the supposed pun behind the name I.C. Wiener?