Who is the lady in The End Of Time?

In The End of Time, we see that The Doctor looks at one lady who was alongside Rassilon very peculiarly. Why? Who was she? What was her role? Did the Doctor know her? If yes, how? 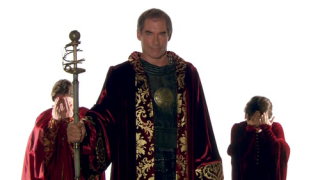 Her purpose in the story is to inform Wilf that if the Doctor wanted to prevent the oncoming re-emergence of the Time War, he would have to take up arms. Since she is one of the two Time Lords that are standing as "monuments to their shame," it can be deduced that she is a dissenter of Rassilon's final sanction and does not want the Time War to be unlocked.

As for who she is, her identity is never confirmed in the series. However, in Doctor Who: The Writer's Tale - The Final Chapter, Russell T. Davies confirmed that he initially intended for the character to be the Doctor's mother, but decided to leave the matter ambiguous and that ultimately, she is whoever the viewer wants her to be.

As summarised on Wikipedia, with a quote from then-showrunner Russell T. Davies from The Writer's Tale: The Final Chapter:

One of the two dissident Time Lords, described as "The Woman" in the credits, visits Wilfred on several occasions, appearing and disappearing in unexplained ways. When she lowers her arms to stare at the Tenth Doctor he appears to recognise her, but when later asked by Wilfred about her identity, the Doctor evades the question. British newspapers The Daily Telegraph and The Daily Mail identified the character as the Doctor's mother as early as April 2009. Russell T. Davies wrote in an email to the author of The Writers Tale, "I like leaving it open, because then you can imagine what you want. I think the fans will say it's Romana. Or even the Rani. Some might say that it's Susan's mother, I suppose. But of course it's meant to be the Doctor's mother."

I honestly liked to believe it was somehow Donna, as she may have been able to unlock her Time Lord part for real and gone back in time. If it was, then that would explain a little bit

Well, "The Woman" actually says that she was "lost long ago". Then, later on, Eleven refers to Susan as "lost", as well. Not to mention that her features are extremely similar, if you look closely. I really think she's Susan.

Bonus: did you know that Susan's real name, Arkytior, is the Gallifreyan word for rose? :D

I also think she's the Doctor's mother. The way the Doctor looked at her, when he first saw her in The End of Time showed recognition. And also the fact that once she showed him with a look at the white point star what he had to do, he immediately trusted her. So at least she had to be someone the Doctor knew well enough to trust blindly. For me the key to this mystery is the "answer" the Doctor gave Wilf when he asked him, who the woman was. The Doctor first looks at Donna's mother and then proceeds to look at Donna herself, as if he wanted to say "The woman is to me what Donna's mother is to Donna: a mother."

I think she's Donna. When Wilf asks the Doctor, "Who was that woman?", the Doctor doesn't answer, but looks straight at Donna and nods in her direction. This explanation leaves a lot of holes, of course, but so do all the others.

I believe it is Donna.

The timelords needed a connection to communicate with someone outside Gallifrey. In the case of the Master they used drum beat they implanted in him. So apparently the woman had some kind of connection Wilfred Mott and apparently to the Ood. It is unlikely that Wilfried Mott has met any more timelords. Also there is this nice asymmetric parallel between the forced sound of drums and the Ood who praise the "Doctor Donna" in songs.

And if you want to speculate: what if the official answer that is was his mother is also true? What if Donna is the doctors mother?

Of course that is no proof, but it is nice to contemplate.

Thomas WeinbrennerThomas Weinbrenner
1,25188 silver badges2424 bronze badges
add a comment  |
-2
Want to improve this post? Provide detailed answers to this question, including citations and an explanation of why your answer is correct. Answers without enough detail may be edited or deleted.

I do believe that she was the Doctor's mother, as that was the first thought that went through my mind.

The look they both gave each other when they saw each other, that just gave her identity away.

1
The End of Time, Wilfred and the Woman

21
In Doctor Who, how does River end up in prison?
10
Why didn't Rose save herself from the parallel universe while she was endowed with the time vortex?
4
How is it that neither of the Doctors knew what to do in the end of Time Crash?
13
Is The Doctor omniscient? Or was he bluffing?
9
How did the meta-crisis Doctor survive (or remain sane) when Doctor-Donna didn’t?
7
Who wrote the book “The History of the Time War”?
12
Why didn't the Doctor become a vengeful God when he absorbed the Time Vortex?
5
Why does the Doctor blame Rassilon for the Horrors of the Time War?
4
How did The Doctor take Harriet Jones down in the Christmas Invasion?