How did the Doctor join the others outside the TARDIS without opening its door?

The Name of the Doctor spoilers

This is hard to explain.

The only way to enter or exit the TARDIS is through the door, right?

When the Doctor and Clara take the catacombs' path (supposedly, it is a shortcut to reach the TARDIS), they reach this place: 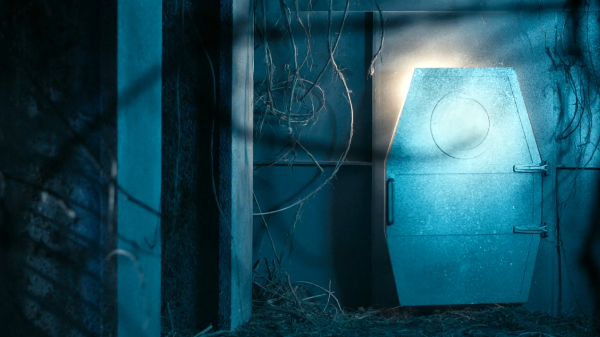 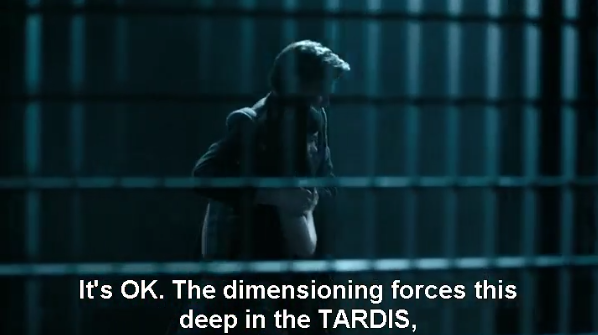 Wait what. This deep in the TARDIS?

So it seems clear that our heroes are inside the TARDIS after passing through the catacombs. 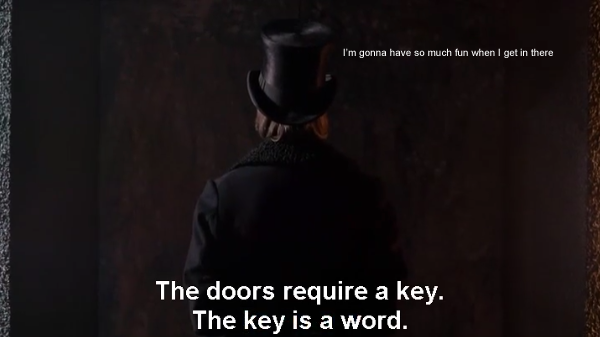 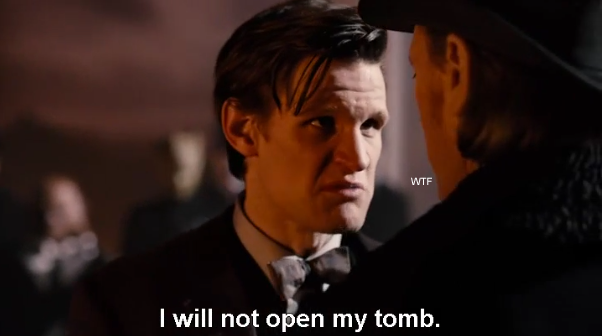 Given that the Doctor and Clara were deep inside the TARDIS, how did they exit without... you know, opening the door?

(Sorry for so many images. Images are cool.)

A small-but-critical detail here is that Vastra, Jenny, Strax, and the Great Intelligence are all inside the TARDIS as well.

When Vastra wakes up, she looks around the room and the camera, seeing things from her perspective, moves upward to show a reversed "POLICE PUBLIC CALL BOX" banner, indicating that they are inside the TARDIS. The passage that the Doctor and Clara took was likely just another way of getting into the TARDIS, but did not lead to the console room with the Doctor's time tunnel (as the only way of getting into that room was by saying the Doctor's name in order to open the doors).

Additionally, we also see that the sealed door with the password does not lead directly to the console/time tunnel just as the usual blue doors would; the sealed door leads to a staircase that goes up to the console. That suggests, to me at least, that the console room is, by that point, the "core" of the structure, probably due to a combination of the size leak and because of the very critical nature of the contents of the console room (that is, the Doctor's time tunnel). If the core of the structure is sealed off from the rest of it and can only be accessed via one door with a password, then the likelihood of anybody getting inside it is very small.

It is not necessary to open the doors in order to exit the TARDIS.

The first occasion on which this is demonstrated appears to be episode 1 of The Wheel in Space (1968). Although the episode does not survive on film, so the point cannot be directly checked, it is suggested in some sources that in this episode the Doctor and Jamie leave the TARDIS through an emergency exit out of the back of the Police Box shell.

See: http://guide.doctorwhonews.net/story.php?story=TheWheelInSpace (quoting from the book Doctor Who: The Second Doctor Handbook by Howe, Stammers, Walker).

The second occasion on which this appears to occur is in Logopolis (1981), which also seems to imply the Tardis has an emergency exit at the rear. The Doctor's escape onto the Barnet bypass 21 minutes into episode 1, after the two Tardises have become trapped inside one another, in what Adric believes to be an infinite regression, appears to only be explainable by the existence of such an exit.

A third occasion involves something slightly different. In The Three Doctors (1972), Patrick Troughton's Doctor enters the TARDIS in episode 1 without using the doors. He subsequently departs from the TARDIS, at the end of episode 4, also without using the doors. Both of these incidents involve his character materialising/dematerialising at the control of the Timelords, and presumably (the point is never clarified) involves either a Time Ring (see: Genesis of the Daleks, 1975) or the Time Scoop (see: The Five Doctors, 1983).

Genesis of the Daleks is NOT such a case, since although the time ring which the Doctor has in his possession during that serial is used to move him and his companions from one point in time-and-space to another, neither their starting point nor their destination is within the Doctor's Tardis.

A fourth occasion again involves a different method. In The Time Monster (1973), the Doctor confronts the Master whilst they are both travelling through the time vortex in their respective Tardises, and the Master uses his more advanced model of Tardis to cast the Doctor into the vortex to his doom. The Doctor exits his Tardis by dematerialisation, without using the doors. Later, he re-enters his Tardis using the same method, albeit with assistance from Jo manipulating some of the controls, but also without using the doors.

A fifth occasion, using an entirely different process, appears to occur twice: firstly in 1968, and subsequently in 1984. In 1968, during The Mind Robber, the Doctor exits the Tardis when it breaks up around him, and re-enters it in the final episode only when it re-forms round him. It is left ambiguous as to whether this serial was a dream.

However, in the 1984 serial Frontios very much the same thing happens, with the Tardis breaking up on arrival on the planet and reforming at the end of the final episode, in an echo of the events of 1968 - but without any of the original ambiguity.

All of these incidents illustrate one or other of the various methods (five in all) for entering or exiting the TARDIS without opening the main doors.

In the fourth Doctor story "Logopolis," after discovering that instead of landing outside of a police box, they had landed outside a TARDIS, they went through that TARDIS and out the back. So there could be another exit, just they don't use it.

Ed999 and Andrew Lagerstrom have already noted multiple instances from the classic show of people entering or leaving the TARDIS without using the door. Another example, not previously cited occurs in the first episode of the story "Terminus."

The Black Guardian tries to get Turlough to destroy the TARDIS (thereby killing the Doctor) by removing the "space-time element." (The same space-time element had already appeared earlier that season, in "Arc of Infinity," in which it was removed to ground the TARDIS.) The TARDIS starts to lose it's structural integrity as Turlough works the component loose, and the TARDIS automatically connects itself to the nearest spacecraft, so the crew can escape before the TARDIS collapses entirely. Nyssa exits the TARDIS onto another vessel before the structural integrity of the TARDIS is restored.

In one of the Fourth Doctor stories "Genesis of the Daleks" had his companion and him arrive on Skaro without their TARDIS because it was taken away until they finished a mission. He was given a red button to push to get it back. The Time Lords had tossed him out and kept the TARDIS.
This is as opposed to the TARDIS materializing around people, which is shown in several episodes, such as my fave "Dinosaurs in Space" where Rory's father is swept up.
I guess it's not relevant to the question of how they got into the dying TARDIS. But I will say that the tombstone was set up at some point, so I assume the Doctor made the tunnel and put the gravestone to "remind" himself, some time after the events in the episode, Bill and Ted style.

19
Does the front door of the TARDIS always open up to the control room?
23
How does the shop owner in “The Bells of St. John” have the number for the TARDIS?
32
How did the Timelords give the Doctor New Regenerations without messing up the Universe?
26
Why didn't Clara die when traveling outside of the Tardis?
1
How did the 11th Doctor know that he was going to survive?
3
Why didn’t the TARDIS let Clara in and get to Trenzalore quicker?
9
How much affinity does the Doctor have for Gallifrey?
12
Why did the TARDIS take them to the Doctor's childhood and why didn't she want the Doctor to know where they were?
5
How does the TARDIS prevent unauthorized access?