Have Transformers genders ever been explained?

When the first live-action Transformers movie was released, the writers said that Arcee had been cut from the script because they couldn't figure out how to explain genders in Transformers. Of course, they reneged on this in the second movie when Arcee, Chromia and Elita-1 showed up briefly.

Romantic relationships have existed or at least been implied in many of the continuities and it has always between male and female Transformers. So, gender does seem to have some sort of place in the mythos, but in no continuity (that I am aware of) have Transformers been created via sexual reproduction. Has the origin of genders or reason for them ever been explained?

To date, no one has explained why there are two genders, what the origin of said genders were and why a machine-based species even bothers having remnants of a dimorphic species (reproductive genders) if they were always machine-based having no previous organic origins.

For a dozen years, female Transformers weren't even acknowledged as even EXISTING. Bob Budiansky, one of the premiere writers of the early Marvel comics versions acknowledges this in an interview. To his credit, there were early notes indicating he wanted there to be female-gendered Transformers before Hasbro said, no:

In most of their depictions, female-gendered Transformers were not shown or barely shown to exist. The manufacturers of the original toys admitted the toys were developed for young boys and gender wasn't really a factor in their design.

By the time the Generation 1 Transformers were being put on Television it had been decided again that there were no female Transformers. Except where they were drawn in the backgrounds or would mysteriously appear and disappear in a single episode. Such inconsistency only added to the frustration of the viewers.

The IDW Generation 1 continuity has explained the existence of female Cybertronians.

In this continuity Cybertronians are strictly asexual and reproduce by mining (or splicing) sparks and growing them. While a facsimile of what we fleshlings might call romantic relationships do exist between Cybertronians, it does not require gender differentiation.

The only known female Cybertronian in this world is Arcee, who was the result of an experiment to introduce gender into the asexual Cybertronian society by mad scientist Jhiaxus. This however did not introduce sexual reproduction, and its only result is a Cybertronian with a feminine body who also inexplicably causes other Cybertronians to refer to Arcee using feminine pronouns.

Another female Cybertronian can be spotted in Megatron Origin (modeled after G1 Elita One), but it is unknown if she is simply a homage, an artist error, or another experiment.

The discovery of the lost Cybertronian colonies has brought in a whole host of female characters. This has retconned the existence of Cybertronian females from never existing, to being a subset of the Cybertronian race that had left the home planet a long time ago. Apart from having a (usually) sleeker form and the use of different pronouns, there doesn't seem to be anything that differentiates male Cybertronians from female ones.

A 1989 edition of the UK Transfomers comic offered an explanation in the story Prime's Rib (the title a seeming allusion to the biblical story of the origin of Eve, the first woman).

As Denyer explains in his review, it lays down that in comic continuity Transformers don't have a biological concept of male and female. The 'rib' of the piece is Arcee, who's been built as a PR exercise after complaints from humans that all Transformers are male.

For more details, see the review of this story at the TFArchive. 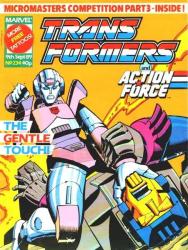 The mouthy cod-feminism may be satire, but it's not especially funny, and the story stands up badly to rereading. Like several of Furman's more throwaway strips, it comes across as brattish and smug.

In The Covenant of Primus, it has been explained that Cybertronians don't have different genders the same way as humans do.

The Primes, and later the Transformers, do not have gender in the same way that humans and certain other biological species do....To Cybertronians, there are two distinctive "kinds" that we easily divide ourselves into, recognizing key feature differences in the manner in which information is processed.

It also states that they started to do 'gender different terms' after coming across aliens that do have gender to show they can recognize the differences and equality.

Here Solus Prime, and those who were later formed in her lineage, are referred to as "she" in order to comply with your human gender reference terms and to show a distinction that a distinction that Cybertronians recognize among themselves (though other races do not).