Do Muggle trains roll along the Hogwarts Express railway near Hogwarts without seeing the enchanted area?

The Hogwarts Express utilizes King’s Cross Station and the Muggle rail line leading in and out of London. Has JKR mentioned if Muggle trains use the tracks all the way to and beyond Hogwarts as part of England’s regular rail service without seeing the enchanted magical community as they roll by it, or if the route to Hogwarts is an invisible spur for the Hogwarts Express exclusively?

This answer is all supposition, using no direct canon or WoG input that I'm aware of:

Most likely there are no muggle trains use that particular rail line, as the platform for the line is hidden. But even if a muggle train does uses it and goes all the way to the end, it would end up in Hogsmeade.

But, you say, Hogsmeade is a magical town. Sure it is. But it would be easy to set up some kind of monitoring ward on the tracks to warn the village of an incoming muggle brigade. The villagers could then prepare for the impromptu visit and look ordinary, if maybe not quite normal.

My memory wants to tell me that it wasn't uncommon for Hogsmeade to have muggle visitors anyway, to trade for odds and ends and the occasional tourist. But that might be made up.

No - Muggles can’t board at either station.

The Hogwarts Express almost certainly doesn’t share its rails with Muggle trains, as Muggles wouldn’t be able to board any train on the same rail, since the Hogwarts Express is hidden from Muggles behind Platform Nine and Three-Quarters.

“Harry had caught the Hogwarts Express the previous year. The tricky bit was getting onto platform nine and three-quarters, which wasn’t visible to the Muggle eye. What you had to do was walk through the solid barrier dividing platforms nine and ten. It didn’t hurt, but it had to be done carefully so that none of the Muggles noticed you vanishing.”
- Harry Potter and the Chamber of Secrets, Chapter 5 (The Whomping Willow)

The other platform, where students get off the Hogwarts Express to go to Hogwarts, is in Hogsmeade.

“They didn’t talk much during the remainder of the journey. At long last, the train stopped at Hogsmeade station, and there was a great scramble to get out; owls hooted, cats miaowed, and Neville’s pet toad croaked loudly from under his hat. It was freezing on the tiny platform; rain was driving down in icy sheets.”
- Harry Potter and the Prisoner of Azkaban, Chapter 5 (The Dementor)

No Muggles would be boarding trains from the station at Hogsmeade either - Hogsmeade is an all wizarding village.

“Harry pulled out the Hogsmeade permission form and looked at it, no longer grinning. It would be wonderful to visit Hogsmeade at weekends; he knew it was an entirely wizarding village, and he had never set foot there.”
- Harry Potter and the Prisoner of Azkaban, Chapter 1 (Owl Post)

Therefore, as both ways to board a train running on the same rails as the Hogwarts Express would be inaccessible to Muggles, there won’t be any Muggle trains running along the same tracks as it.

Even when you fly over Hogwarts in a plane you can not see Hogwarts, this can be easily validated by at http://www.google.com/earth/index.html where satellite images fail to show hogwarts or Diagon Alley, which is located in central London and would be easily identified if visible.

No, I don't think so. After watching all the movies and reading all the books, a muggle train next to the Hogwarts express is never seen/mentioned. 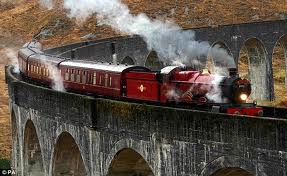 Besides, the track is only meant for one train. And if a muggle train followed the express (even without knowing it) it would end up in hogsmeade station. And then the ministry would send over obliviators to brain wash the muggle.

Somewhere (I think it was in the Goblet of Fire) Hermione mentions that Hogwarts appears to muggles as a ruin with "Danger" signs posted all over it. Presumably Hogsmeade station is similarly enchanted to look like a disused station. Only a single track runs through it, so most likely it is on a private branch line with a balloon loop to let the train turn round. This would explain why the line does not appear to terminate in the station.

The viaduct we see the train crossing is Glenfinnan Viaduct, which is part of the UK rail network. Rather than have a special magical line running from London to Hogwarts it seems more likely that the Ministry of Magic arranges for the Hogwarts Express to travel on the regular train network without being noticed.

21
What keeps Hogwarts (or Hogsmeade, or Azkaban) from being shown in the Google Maps satellite view?
50
How does the line to Hogwarts fit in to the UK national rail network?