In the early 90's, I read a book about a boy who wanted to go to a magic school, but everyone said that he was not good enough. Finally he got in.

There was a test where he had to repeatedly light and put out a candle. Then one of the teachers tried to use him in a ritual to take over the world or destroy the world (can't remember which). He summons a fire elemental that owes him a favor and it gets him a nearby sword that he uses to stab the teacher.

Because using human weapons is forbidden the other teachers are supposed to punish him but since he saved the world they make him a journeyman and he has to leave the school instead.

As per Krieri's request, I am posting this separate from their answer. School of Wizardry, the first book in the "Circle of Magic" series by Debra Doyle and James D. Macdonald, does indeed match perfectly.

The protagonist, a boy named Randal, is training to become a knight when he sees a magician perform at his castle and has a prophetic dream which he interprets as meaning he's destined to be a wizard. He does have a great deal of trouble at school. He has a lot of power, but not much control. The candle lighting is a particular part of his test that he only barely passes because, instead of doing the "right" thing by invoking fire or drawing the heat form the candle, he's instead handling the raw energy. Master Laerg, one of the wizards at the school, does start tutoring him after that examination, and teaches him basic summoning, where he learns the name of the fire imp.

Master Laerg later attempts to sacrifice Randal to gain power from a demon and indeed, Randal summons the fire imp, who brings him the sword, and Randal uses his former training to impale the wizard. The wizards swear off use of all conventional weaponry, so indeed, he winds up on probation at the end of the first book, forced to seek out a reclusive wizard for his judgment and forbidden to use magic or weaponry to defend himself, a major issue because the kingdom is currently going through social chaos and bandits are everywhere. 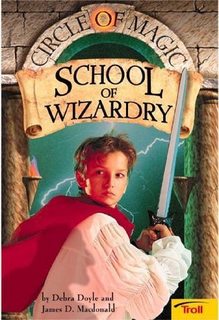 Not the answer you're looking for? Browse other questions tagged story-identification magic young-adult or ask your own question.

6
YA fantasy book - boy in boarding school?
7
Magic school and chalk magic
38
Is the Magic School Bus actually magic?
7
Fantasy novel series with male protagonist, alternate world, winning hand in marriage, starting a magic school
16
Story with student test to find a new world and bring back navigation data, teacher tried to persuade students to go native
8
Movie about a magic school with boy who can shapeshift into eagle or falcon