Where is Kirk's home on Earth in “Search for Spock”?

This would also have been his home in "Wrath of Khan"; because it seems to havethe same view out the window. I assume it is in the SF Bay Area but it kind of looks like it is looking back towards Sausalito and I want to know if I'm right.

However I can imagine that his home in the movies is somewhere other than it was in the original series since he is semi-retired.

According to the Memory Alpha article on apartments:

James T. Kirk's San Francisco apartment was the home of Admiral James T. Kirk in 2285. It was in a tall skyscraper in San Francisco and featured sweeping views of the city, the bay, Alcatraz, the Golden Gate Bridge and at least two other prominent 23rd century skyscrapers.

It dives a bit further into the backdrop itself:

His apartment is in Russian Hill.

The view from his apartment is looking north towards Marin County from the Russian Hill neighborhood in San Francisco.

This behind-the-scenes picture shows the translight used on stage to create the view out Captain Kirk's window. It appears as if the view is from Russian Hill since we can see the Marina and Presidio on the left, the Golden Gate Bridge next, and then Mount Tamalpais in the distance on the right. The Marin County lights, many of which were probably added by the effects crew, are coming from Fort Baker and Sausalito.

Here is a picture of two artists creating the backdrop for Kirk's apartment. 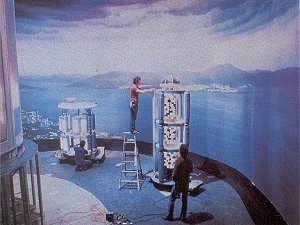 A few oddities which you can check by comparing the image above to a Google Map of the region. 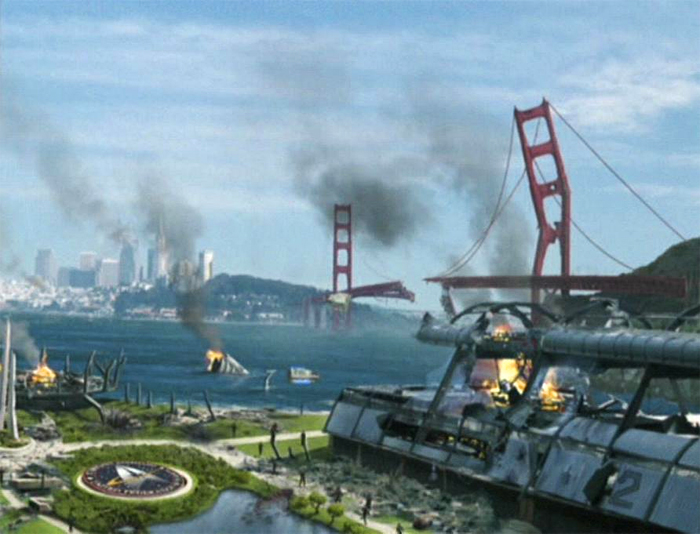 I think it's on the Mare Island golf course looking inland.

I'm not sure there's anything within either The Wrath of Khan or The Search for Spock that explicitly says where Kirk's apartment is. The existence of both fast atmospheric shuttlecraft and transporters mean that it could actually be anywhere at all!

The simplest explanation, though, is that it is in fact in San Francisco or at least in the Bay Area. Presuming that he actually has a "day job" as an administrative admiral at Starfleet HQ, or as a teacher at the academy, or both, it would certainly be the most convenient location for him.

I was wondering the same thing after watching Star Trek: The Wrath of Khan on SyFy last night.

Here are a couple shots of Kirk's apartment on Memory Alpha. The windows look out onto the Bay, but I don't see the Golden Gate Bridge or Alcatraz. Does the ridge behind the bay look familiar to anyone? That could help pinpoint where in the Bay Area Kirk's home is located.