Is there an in-universe reason why Morpheus was able to stand up to the agents in Reloaded?

In the first movie, the agents are totally unstoppable. Morpheus gets his butt kicked by Smith pretty bad--stood no chance. However, in Reloaded, we see Morpheus holding his own against an upgraded Agent; Trinity, on the other hand, gets her butt properly kicked.

My best guess as to why this is is that it the Wachowski brothers simply needed Morpheus to be able to stand up to an Agent to enhance the action/plot, thereby breaking in-universe rules. We see this type of thing all the time, the Plot Armor in the anime Gundam Wing being the most offensive example. So, is there any kind of explanation as to why Morpheus didn't get killed instantly by the Agent? Or did the Wachowski siblings simply ignore a fact of the world they had already created?

It lacks some very significant details but can give you a picture nevertheless. Also it's quite demanding even to watch these fights for analysis so there are some errors for sure, but they don't alter the "big picture". "M." means Morpheus

Note: of course you shouldn't believe no pretty tables! You need to see the thing for yourself!

What is interesting here is that, as you can see Morhpeus is not too much better in doing defense once he needs it. But he became so much more agressive and able in initiating attacks.

How? It can be that he is faster because of his mind and/or that he has learned important things, ways and skills about fighting Agents.

In terms (primarily*) of skill, it is natural I think that Neo tried to teach them as much as he can (shamelessly linking here my previous answer).

But for the mind, it is also very-very important what also A Pale Shadow is saying in his answer, that Morpheus is believing in himself here.

Morpheus is basing his life on the Prophecy. He is called crazy (by Zee) and all, he is totally into it. In The Matrix, Morpheus saw his purpose as to buy time for Neo. So his own life was not conflicting with the Prohephecy. He succeeded in buying time.

In Reloaded, Morpheus understands that if the keymaker dies Neo cannot fulfill the Prophecy. He believes that the Prophecy will be fulfilled and this gives him the strength to believe in himself. I think this "further" frees his mind, allowing him to be faster, just as it was the case with Neo's in The Matrix.

Also, I know from experience, it really means a lot if you've seen/experienced something done, contrasted with when you only think that it "should" or "may" be possible, like defeating Agents here; and thus also agree with A Pale Shadow in that this definietly puts Morpheus in a more confident situation than in The Matrix.

Previously what they were thinking about agents was to run. Now he may think that they can be beaten if they are not fast enough. Quite a difference.

Also, do not forget that Morpheus at this point is actually experienced with fighting Agents!

As for Trinity, she can actually keep up relatively well. She never fought Agents before! Actually, if you check it, she falls for the same tricks as Morpheus at the first time (with Smith) - quite interesting! But she is also doing a bit better than Morpheus for the first time.

The real problem for Trinity actually only starts when there are suddenly two Agents. 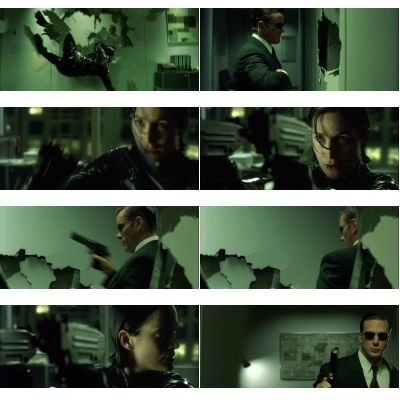 Until that, she can actually keep up. (Not totally well, but she stands a chance, she has meaningful options available for her.) Only then, she starts to lose instantly.

*:(As a matter of fact I believe Neo also helped/trained Morpheus (and Trinity), in their mind field, as much as he could in the time prior to Reloaded. It would be hard to verify this, but even without doing so, the other things already provide some explanation.)

At the point where Morpheus stands up to the Agent on the freeway he has a number of forces guiding him:

First, Morpheus has the hope that he can defeat The Agent:

Trinity: You always told me to stay off the freeway.

Trinity: You said it was suicide.

Morpheus: Then let us hope that I was wrong.

Secondly, he must do it, there is no alternative, Morpheus accepts this as his fate and is calm and courageous in the face of death.

Morpheus: Do you believe in fate Neo?

Lastly, Morpheus knows that the Agents can be defeated, he has seen Neo do it, thus he has the belief that he can do it too, and as we have seen, belief in what you can do in The Matrix is more important than anything else.

Morpheus: Do you believe that my being stronger or faster has anything to do with my muscles in this place? Do you think that's air you're breathing now?

Morpheus, armed with hope, courage, and belief is a match for The Agent, and in some ways much more the hero than Neo at this point.

Could it just be that Morpheus lasted longer against an agent because he is a better hand to hand fighter than Trinity?

I am not sure he did that much better on the truck top than in the building, although he did well in both cases considering he was fighting an agent.

The previous time he fought an agent he was trapped in a corner with no room to move and took a beating but still lasted a respectable amount of time (like when a boxer is trapped in the corner). There was also convenient walls etc for the agent to bounce him off.

On the truck top he had more room to move which makes fighting far easier. He also had a sword for part of the fight against an unarmed agent and he would also have been killed had he not landed on a friendly car when he fell off the truck.

I would say the reason the fight was more even was that for Morpheus this fight had a better environment (room to move etc), a handy good melee weapon (the sword) and blind luck (the car behind being there at the right time).

Here is a link to the fight scene:

I had a friend in college who was obsessed with this particular scene and we watched just this part over and over, almost on repeat. Obviously this scene had touched him. IN fact I had asked him about it, and he didn't really even like the rest of the movies after that. That being said he saw something of great significance in this scene out of all the movies.

It may sound too simple, but Agents-> upgraded, Neo's allies: upgraded. Because and this is where the jump of logic takes place, when they are fighting in the matrix, (Morpheus, Trinity) are subject somewhat still to the laws of the matrix (Neo later being the only exception) the rules have changed for one side the rules have changed for the other. Agent Smith being the best example of this. It's very ying-yang, balance between good and evil, and the Wachowski brothers admitted to drawing a great amount from Eastern spirituality. Morpheus' upgraded form would be something like a religious zealot and that would cause him to consider his life less important, and he would be a better fighter.

Why are Neo and his crew while in the Matrix able to hold their own against Agents who previously wiped the floor with them? MOTIVATION.

You are overthinking the nature of the conflict within the Matrix. Until the proven existence of Neo, no anti-Matrix operative would dare confront even Agent 1.0 unless forced to because the BELIEF was, if you confront an Agent, you die.

However, Neo's experience with the agents indicated while they were upgraded, they were still not really a match for him. So agent 2.0 was really no more effective than Agent 1.0 once Neo found his ground.

Every time any of them are forced to fight an agent, they are fighting for something larger than themselves. Note Trinity fighting the single Agent 2.0. She held her own quite well for someone WHO NORMALLY RAN AWAY FROM AGENTS.

Morpheus and crew were more effective not because of their training, because they all trained and used the same software upgrades delivered to them by their operators.

If anything, Morpheus and his crew were approximating the same effectiveness the Matrix had as a machine. Combat without thought to the consequences of its actions.

I think the guy who said Morpheus needs room to move to fight at his best has the right idea. I haven't seen the first movie in forever but I remember Smith (well, all of the agents really) as like this wrecking machine with overwhelming strength and durability, whereas every fight scene I see Morpheus in (other than the one against Smith) he's bouncing around like Floyd Mayweather on the moon. In the enclosed space where he fought Smith he couldn't do that. He was forced to fight a stronger, tougher guy head on with no space to maneuver so naturally he got his ass handed to him. In a wide open space like on top of that truck we really got to see the best of what Morpheus has to offer. And as has been mentioned, the fact that he had a sword for part of the fight and a car that saved him from a potentially fatal fall makes up a fair bit of the difference as well.

To me, by this logic, the god awful 'Love' story in this series should push Trinity beyond everyone but Neo. You know, because lolove conquers allol.

In reality, Morpheus is better in RL because he had to be. And Trinity isn't because she had to die. She had to give Neo reason for what he did at end of TM and RL and end of RV.

Neo is the prime program(the one) he has power over the matrix and the code of the matrix. each individual who enters has a code over there residual self image that neo can see. since neo can alter the code its a logical conclusion that neo might have simply upgraded Morpheus and Trinity or maybe even upgraded all members of zion's soldiers. and that the only reason Morpheus didn't manhandle those agents because they too were upgrades

13
Why can't Morpheus, Trinity, etc. behave like the agents as Neo does?
8
How did Smith gain access to the backdoors?

13
Why Was Morpheus So Sure the Oracle Told Him The Truth?
12
Besides the Agents what else was there actively looking for people in the Matrix?
33
Why are there only three Agents at a time in the Matrix?
13
Why can't Morpheus, Trinity, etc. behave like the agents as Neo does?
36
Why did Cypher trust the Agents?
5
In Reloaded, why bother delivering the 'gift' while avoiding contact?
15
Did the Agents know about the history of the Matrix and/or previous Ones?
1
Why did the Agents suspect that Morpheus may have had a traitor in his ranks?
7
Was Neo dreaming when Agent Smith interrogated him, his mouth disappeared, and a robotic insect crawled into his belly button?