Set in almost prehistoric times in another world, two children are kidnapped. They're seers but keep it a secret. At some point, they find missing legendary shards of a broken magic stone. They're also rescued by winged red horses.

I read it about 6th grade, so that would have been about 1982-84. I do not think it was a new book. The children were a boy and a girl, both having the gift of foresight. The only things that I remember are the shards of a green stone - they find one in each of the books. They were kidnapped with other children and they find one shard in a tunnel on their way to where the kidnappers take them. They are given a drink called Magogweird and then red flying horses rescue them. The book jacket has a planet with two moons, a red pegasus and the two children on it. It was near Madeline l'Engle's books in the Dewey Decimal system in the Middle School library.

It sounds like you're after "The Dark Green Tunnel" by Allan W. Eckert, the first part of the two part "Mesmerian Annals" series.

The Dark Green Tunnel is a fantasy, a la C.S. Lewis, about twins (a boy and a girl) who find their way into a parallel world in which there are strange creatures, strange people, strange topography, and evil kings and warlocks trying to rule the entire land of Messmeria. The twins join the "good" forces to help overcome the evil ones. Three children in the Florida Everglades find an entrance to another world which is peopled with centaurs, gnomes, a wizard, and a wicked king, and where they experience both great danger and great joy.

The cover art for the sequel featured children riding on giant red eagles; 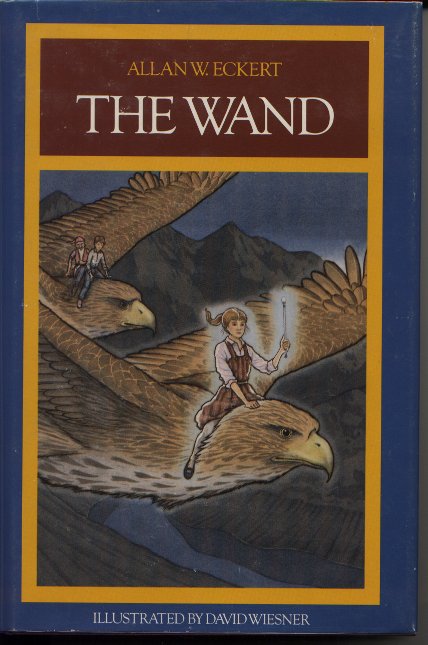 7
Book about adults who were accidentally exposed to govt chemical testing as children and are now being killed.
5
Can't remember fantasy novel with magic and technology mixed, search for elemental shards/crystals
4
Science fiction about found children who are adopted into families and age quickly
6
Sci-fi book series about two orphan boys who are adopted and trained by two monster hunters
8
Fantasy novel with two young boys who find a portal and are given a quest. Wolf on the cover
4
YA Book about two children who are turned into a manta/sting ray and a large bird
3
Book about winged boy who befriends two children?