I remember a book from my youth (1979) in my elementary school library, about a kid with a 'cool' uncle that had an elixir. When the boy applied this elixir to his back he grew wings for the night. But when he was seen by someone, the elixir would never work for him again. I remember it being hardback (but that could be wrong) with no picture on the cover.

Does anyone know what book this is?

I believe you are seeking the book "Black and Blue Magic". In the book, it is not his uncle that gives him the bottle with the magic ointment that grows wings, but a guardian angel seeking to reach his own goal in helping his charge.

Though you indicated it had no picture, the cover is listed below along with a brief description.

Black and Blue Magic on Amazon 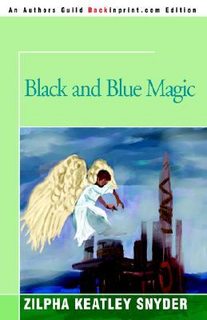 You'd think that someone with a name like Harry Houdini Marco would be deft and skillful, but Harry could only occasionally catch even an easy fly ball without making some dumb error. On top of that, most of his friends' families were moving to the suburbs. It would have been a long, dreary summer, but then a Mr. Mazeeck showed up and turned out to be more than he seemed. After helping the elderly gentleman, he receives a mysterious bottle with something very special inside as a reward and with careful instructions as to how to use it. The gift of flight.

15
Scifi short story with a star in a jar
9
80's children's fantasy book with a cat on the cover
10
Book series with travel to purple grassed planets and space pets
5
YA Novel where the main characters family have been replaced by impostors
6
Book set in modern times with a disabled boy who has a dragon for a friend and protector
1
70s-80s sci-fi collection with aliens and a girl werewolf who may have eaten cats
5
Book about a kid growing up in a colony on another planet with his father, meets a girl also in the colony and they explore together