How did Tony Stark have the Mark II armour in Iron Man 3?

How did Tony still have this armour, considering Rhodey took it in Iron Man 2 and it became the War Machine. Are we expected to believe that Tony built another one? What would be the reason for that?

He didn't rebuild the Mark II.

If you are wondering about the armors seen in this panoramic shot, it is speculated these are just models of his previous armors. He spent the bulk of his time making new suits of armor, held in an armored facility below his home. The Mark II seen in this shot is not a rebuild of the suit of armor used to create the War Machine suit.

After the battle (with Whiplash), Rhodes took the armor for "security purposes" without complete objection from Tony. Later, the armor was stripped off of all Hammer weapons upgrades by Stark, considering it an insult and created a new War Machine armor for his best friend. Marvel Cinematic Wiki > War Machine

Stark spent his time working on a contingency plan in case the Avengers might not be enough or available in case of a potential invasion. He called it the Iron Legion.This was a group of remote-controlled Iron Man armors serving as Iron Man's main combat support team, when desperate times called for desperate measures in battle. They were armors Mark VIII to XLI. They were all destroyed when Stark used the "Clean Slate" protocol. 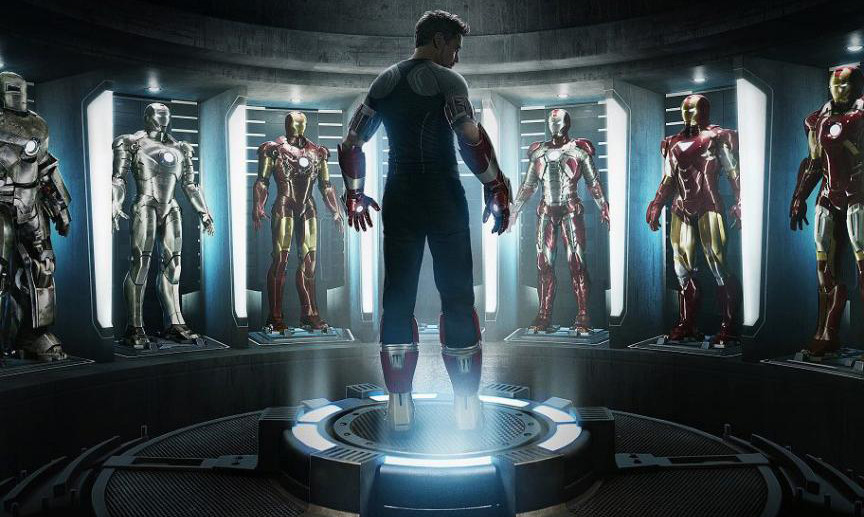 In the comic that took place between Iron Man 2 and 3, Tony gets the armor back from Rhodey, and gives him his current suit. He claims the Mark II armor was never properly calibrated and was surprised it didn't put him into cardiac arrest.

58
Why did Tony Stark build arc reactors into his extra Iron Man suits?
4
How could Rhodey fit into the Mark II armor?
16
How essential is JARVIS to the Iron Man/War Machine armors?
22
Why didn't Stark sue the government for stealing his armour in Iron Man 2
21
How Did Tony Stark Recover the Mark I Armor?
33
How does Tony Stark move his head inside the helmet?
14
What authority does Tony Stark have to claim back the shield of Captain America?
8
Why didn't S.H.I.E.L.D. help Tony Stark in Iron Man?
15
Is the War Machine armour simply “the Iron Man armour with big guns”?
6
Are countries in the MCU beginning to produce Iron-Man-esque armour?