Are Tyranids the creation of humans?

The origins of the Tyranids are unknown to us.

All we basically know that they arrived 741.M41 at the eastern end of our galaxy. I was discussing that point with an Warhammer40k-enthusiast quite a while back and the person mentioned that in one of the novels it is hinted, that the Tyranids were created by humans in some kind of experiment. Just recently I heard that exact same rumor, but can't find anything that would support it.

So my question is: Is there any reason to believe that the Tyranids could be somehow of human origin and if not where does this rumor come from?

The Tyranids are an extragalactic composite species of hideous xenos that is actually a space-faring ecosystem comprised of innumerable different bioforms which are all variations on the same genetic theme. The Tyranid race is ultimately dedicated solely to its own survival, propagation and evolutionary advancement. The Tyranids collectively form a monstrous superorganism that travels across the universe in their great Hive Fleets of biomechanical Hive Ships, systematically consuming all other biomatter to enable its own rapid evolution and reproduction. All Tyranid organisms are synaptic (psychically-reactive), and each Tyranid creature within a Hive Fleet shares and contributes to a communal Hive Mind, which allows the trillions of beings comprising the Tyranid Hive Fleets to communicate and organise instantaneously on a staggering scale. Warhammer 40K Wiki -> Tyrannids

The xenos emerged from the intergalactic space of the Local Group of galaxies, their Hive Mind drawn to the Milky Way by the psychic beacon of the Astronomican transmitted by the Emperor's presence in the Warp from Terra. The first officially recorded contact with the Tyranids for the Imperium of Man came during a Tyranid attack on an Ocean World called Tyran, and from there Hive Fleet Behemoth continued directly towards the center of the galaxy, consuming all the worlds in its path. The Tyranids were defeated, barely, by the efforts of the Ultramarines Chapter of the Space Marines during the Battle of Macragge, although the Ultramarines suffered devastating losses that would take centuries to replace. 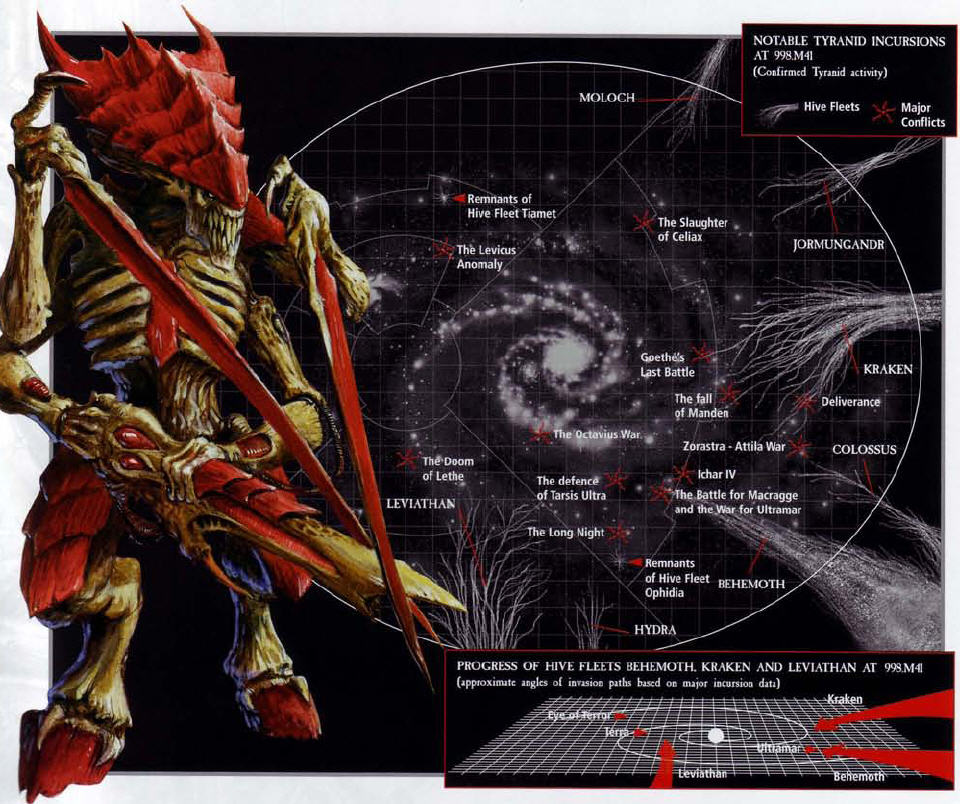 This image shows the multiple points of entry of disparate Tyrannid Fleets, each attacking in multiple pathways, attacking multiple worlds with millions upon millions of members in each subfleet.

I've seen nothing to suggest they were created by humans, rumor or otherwise. The only thing known for sure about their origin is that they're not from our galaxy, that they were drawn in by the Astronomican, and that they may have been consuming many other galaxys:

The exact origin of the Tyranids is unclear, save the fact that they are not of the Milky Way Galaxy and have only recently arrived here after traveling countless millennia in the intergalactic void. It is unknown which galaxy they originated from, or for how long the Tyranid race has been on its genocidal rampage. Indeed their very name is but a title given to them by the Imperium, named after the planet where they were first encountered (Tyran). The Astronomican is what is drawing the Tyranid Hive Fleet to threaten the galaxy. It is possible that they have been preying on other galaxies since time immemorial. According to another source, they have consumed one thousand galaxies and are responsible for the annihilation of millions of intelligent species

The above is from the Lexicanum, and the references seem solid: the codexs and White Dwarf magazine.

I suppose you could argue they were a creation of humanity long ago, but it seems unlikely unless there's some serious time (and space) travel involved.

13
Was there any kind of meaningful communication between humans and Tyranids in Warhammer 40k?
21
Tyranids have no god, would the Chaos Gods have any power over them?
12
Have the Tyranids and Necrons ever engaged in a large scale battle?
4
Can anyone identify these tyranids from this description?
3
W40k book about Tyranids and astartes
6
Where do Chaos stand with Tyranids? Are they pro or against?
10
Have the Tyranids ever made use of 'bugs'?
5
Had the Tyranids attacked Cadia, would their very presence clog the Eye of Terror?
2
What happens when two tyranids from different hives encounter?